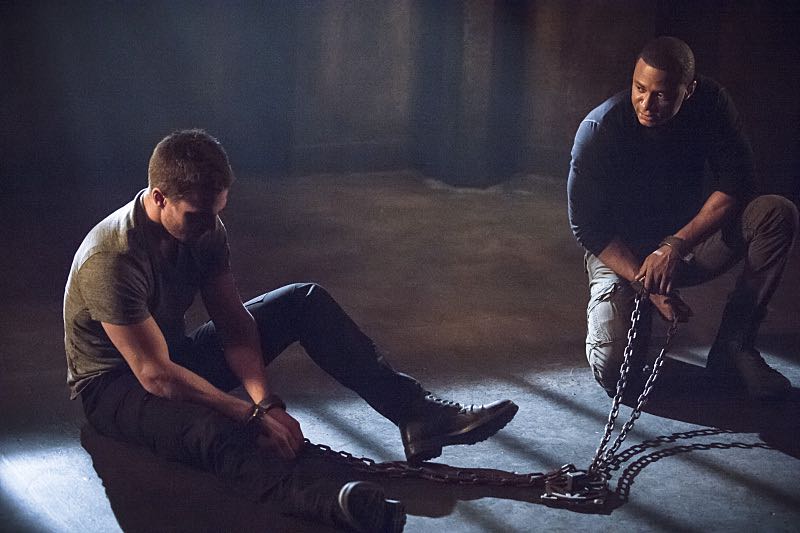 Just when you thought ARROW could not possibly throw anything else at us, it finds new ways to raise the stakes and surprise us all.  This week’s episode features the dual stories of the fall of Malcolm Merlyn (John Barrowman) and the rise of Ray Palmer (Brandon Routh).  Every character around them will have a vital part to play and the ripple-effects from both will echo for the rest of this season.  Sides will be chosen, lives will be sacrificed and secrets will chip away at relationships.

Malcolm Merlyn has known he has been living on borrowed time ever since his great plan of the Undertaking blew up in his face and it made him the target of the League of Assassins.  His underhanded scheme to use Thea as a way to make Oliver Queen (Stephen Amell) stand in his place in taking the blame for Sara’s (Caity Lotz) death was just another one of his schemes that did not quite work out the way he hoped and because Oliver did not kill Ra’s Al Ghul (Matt Nable) — Oliver’s return from death has only painted Malcolm, Thea (Willa Holland) and Oliver as targets for death by the League.  Alas, Malcolm’s plan to kick-start Oliver’s killer instincts on the island by releasing Slade Wilson (Manu Bennett) also backfired spectacularly.  Oliver is only a killer when under dire circumstances and he knows perfectly well that each life he takes claims another piece of his soul in the process. As much as Oliver wants to kill Slade, he won’t.  He knows he will lose something too precious inside him if he does. So he resists killing unless it is truly the last option available and it is why he failed to win the dual with Ra’s Al Ghul — and yet he cannot afford to fail a second time.  So it forces Oliver to align with Malcolm along with Thea in hopes that the three of them working together will pose a strong enough force to deal with Ra’s Al Ghul.  Yet even Malcolm and Oliver cannot foresee every angle and every means of attack.  It is always the one they are least expecting that gets them in the end.  Just who have they trusted that they shouldn’t have?

So while Malcolm Merlyn’s days are numbered as fate catches up to him and the Grim Reaper comes knocking on his door, on the flip-side, Ray Palmer’s life is about to take one giant step forward in achieving his dream of creating The Atom suit and donning the mantle of the newest hero of Starling City.  With Ray blissfully unaware of Oliver’s identity and blindly ignoring the fact that there is already one self-appointed protector of the city — not to mention a whole team of masked heroes who seem to be coming out of the woodwork lately — Ray believes in every fiber of his being that he will be the city’s savior.  After all, the Hood was M.I.A. for over a month, which made the city vulnerable to Brick (Vinnie Jones).  First, the challenge will be to see if The Atom suit actually works; second, whether there is room enough for two hero teams in Starling City — and poor Felicity (Emily Bett Rickards) may just have to choose which team she is working with.  Can Ray be a solo team or is he expecting his Girl Friday to be there to help him navigate the intricacies of being a round-the-clock superhero?

For fans, this means there will be some incredibly stressful, jaw-dropping and thrilling moments, all mixed together.  Fortunately, Ray brings a nice dose of comedy and with some artful displays of chiseled abs, making for some fine lighter moments.  Also showing off some generous skin in this episode, surprisingly, is  Ra’s Al Ghul.  Let’s just say there’s a hot tub moment that may shed some new light on the hard core villain.

Not willing to stand back and let anyone else dabble in their world, Team Arrow suits up, shows up, and does everything in their power to save those worth saving.  There will be a battle of wills, a battle for souls and a battle for the future as ARROW never does anything in half-measures.  Remember:  this is the show that stabbed its hero through the chest and tossed him over a cliff to die.  There is literally nothing the show will not do to embrace the horror and burden of being a hero.

One big tip:  listen carefully.  There are a lot of significant exchanges between a variety of unexpected characters in this episode.     And as the writers and producers like to tease, every secret is worthy of a land-mine moment.  So you can expect more than just a few in this episode.

To find out just how earth-shattering and devastating this episode will be and to see how it sets up the back half of this season, be sure to tune in for this week’s all new episode of ARROW on Wednesday, February 25th at 8:00 p.m. on the CW.