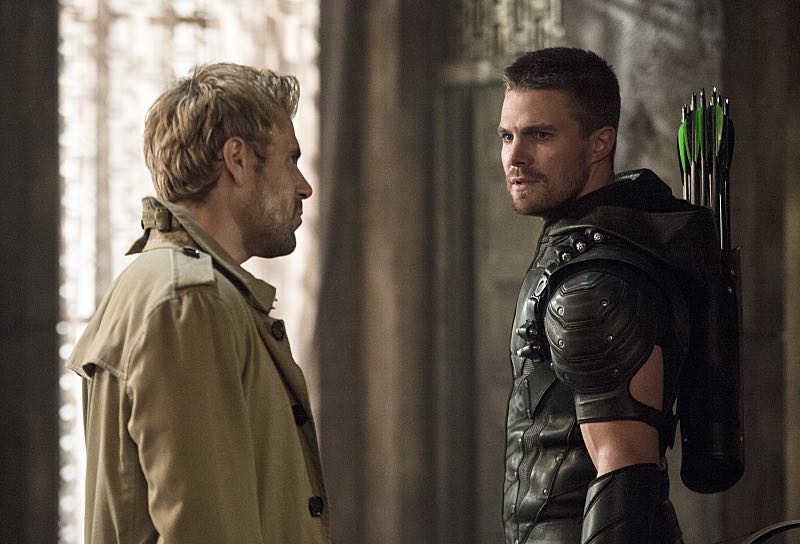 Two key new faces make their appearance in this week’s episode of ARROW:  Matt Ryan reprises his role as John Constantine, and Parker Young guest stars as politics strategist, Alex Davis.  Each brings a bit of key advice for Oliver Queen (Stephen Amell), who is simultaneously planning his political campaign to be the next mayor of Star City and what to do about the M.I.A. Sara Lance (Caity Lotz) who seems hellbent on leaving a pile of bodies in her wake in her quest to satisfy her bloodlust after coming out of the Lazarus Pit.

One bit of advice that Oliver must deal with this week is whether to keep his friends at a safe distance or to bring them in even closer in order to keep them united against any and all enemies that seek to challenge them.  Oliver has learned previously that there is a price for secrets and he is hesitant to allow those to rule his decisions and relationships again.  But what if it is for the greater good?  Will Oliver allow himself to be distanced from those he loves and trusts again?

While Oliver and Laura grapple over the problem of Sara, Thea (Willa Holland) questions whether she should make a sacrifice in order to help restore Sara’s soul.  But is that the only answer?  Fortunately, Oliver has someone in his past that might have another solution:  John Constantine.  But will John arrive in time to help Sara before it is too late?  And will there be a price to be paid for using the magic that John might need use to save Sara?

Distracted, Felicity (Emily Bett Rickards) has a few things on her mind too.  That final recorded message from Ray Palmer (Brandon Routh) has reopened a wound of grief and it the circumstances of his death have begun to prick on her conscience.  Luckily, Felicity is a great multi-tasker and can juggle so many demands on her time and emotions.

Lastly, just how ready are Laurel (Katie Cassidy) and Captain Lance (Paul Blackthorne) to do whatever it takes to save Sara or to save everyone else from Sara’s unquenchable bloodlust?  For Sara is not only attacking the guilty this time around, she is striking at the innocent as well.

With so many questions to be answer, to help tease your brains a bit, here are a few the quotes we have collected from “Haunted.”  Let’s see if you can guess who says these fun quotes:

QUOTE:  “It’s not an accident that you are here.”

QUOTE:  “As you know, we don’t play well with others.”

QUOTE:  “There’s a woman in Pennytown that is just running around and killing people.”

QUOTE:  “Leave town, while you still can.”

QUOTE:  “I want to talk to you about something you forgot.”

QUOTE:  “I’m just grateful that the latest person from Oliver’s past is not another gorgeous woman.”

QUOTE:  “Don’t worry — it’s not like it is going to destroy the city or anything.”

QUOTE:  “Go ahead, Alice, down the rabbit hole you go.”

QUOTE:  “The threat of zombie-apocalypse aside, isn’t it nice to not have to deal with the pain of saying goodbye?”

QUOTE:  “Pretending that you don’t know who your friends are just doesn’t feel very united.”

QUOTE:  “If I have a judgmental look on my face right now, it is because you played with forces that you do not understand and now people are dying because of it.”

QUOTE:  “I think there are certain situations in life where the word okay does not apply.”

QUOTE:  “Sara’s not herself. She’s changed.”

QUOTE:  “The world is a much more complicated place than most people are comfortable believing.”

QUOTE:  “Whenever someone brings up Laurel Lance, you distance yourself from her.”

QUOTE:  “Did you ever stop and think for one second about what I might be going through?”

QUOTE:  “Are you staying around for a cupcake or something?”

QUOTE:  “I hate to be the one to say this: but what if something goes wrong?”

QUOTE:  “I’m talking about the kind of closet skeletons that could cripple you in your first day in office.”

QUOTE:  “I love your family. I always have.  I just wish some times that you gave a damn about mine.”

Everyone seems to have a lot to say in this week’s episode.  Secrets come to the surface, threats are faced, demons are challenged and, for some, there is a chance at healing.  But every secret will leave behind a ripple-effect that has yet to be fully felt.  Like, just what is the real secret of the island?  And why was Oliver sent there?

With those quotes rattling around your brain, have fun watching this week’s episode of ARROW entitled “Haunted” on Wednesday, November 4th at 8:00 p.m. on the CW.