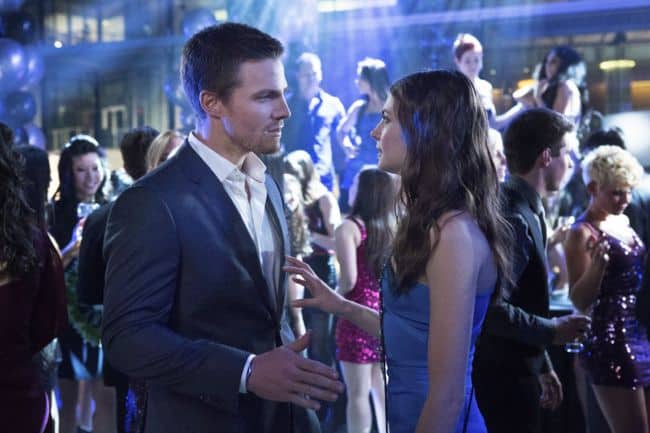 My first impression of the CW’s new superhero saga, ARROW, are mixed. On one hand, it’s hard to imagine anyone other than Justin Hartley playing the hooded vigilante, especially because his long run on Smallville only recently ended. For another, the “Pilot” is far from perfect, with a number of plot holes and things that should be handled differently. But overall, it’s an exciting hour with an enticing backstory, and the bugs can mostly be worked out over time.

Many are already familiar with the history of the DC comic book character. Oliver Queen (Stephen Amell, Hung, Private Practice) is shipwrecked on an island alone for several years. Finally rescued, he returns home in peak physical condition, a handiness with a bow and arrow, and driven by a determination to clean up the city that has become a mess, thanks in part to Oliver’s father (Jamey Sheridan, Homeland). Donning a hood, Oliver goes by the moniker Green Arrow, acting as a modern day Robin Hood.

Missing Hartley aside, Amell makes a great Green Arrow, and plays him in a different way, avoiding too many comparisons. Whereas the Smallville version of the character could be a bit goofy, ARROW takes a more serious tone. There is greater anger and pain in Amell’s eyes, and it’s easy to believe that he can accomplish the physical feats he engages in.

But there are some things that don’t add up. Why doesn’t Oliver return from the island malnourished? Why doesn’t anyone recognize his famous face with just a hood and some green eye makeup? There isn’t even the voice changer that Smallville employed. Why is Oliver the first to tell the police about the Green Arrow, when the timing is already suspicious enough to make the cops suspect that Oliver is the one behind this new “hero” on the scene? He just doesn’t go about things very smartly.

There is also a disconnect as to who the previous Oliver was. He had a good enough heart to befriend the help (Kathleen Gati, Alphas), inspire loyalty and affection from friends and family, and win the heart of the beautiful, intelligent, compassionate Dinah Laurel Lance (Katie Cassidy, Gossip Girl, Melrose Place), who would not have been swayed by his money. Yet, he is also said to be a womanizer and a drunkard, cheating on Dinah with her sister, Sarah (Jacqueline MacInnes Wood, The Bold and the Beautiful). It doesn’t quite make sense.

The “Pilot” sets up the story pretty well. Oliver builds a lair in one of his father’s abandoned factories and begins his mission by making Adam Hunt (Brian Markinson, The Killing, Caprica) pay, literally, for his misdeeds. After giving Adam the chance to do the right thing, and Adam declines, Oliver sweeps in for big action sequences that totally deliver to the superhero fans in the audience.

My complaint is, why does Oliver cross Adam off his list after robbing him of millions? This is just money, and while it helps the victims, it doesn’t truly lead to justice. Why not bring Adam back for an arc, as it appeared might be the case earlier in the episode, after taking the time to introduce several cohorts of Adam’s? Oliver is going to run out of names to cross off soon, and some will have the means to exact revenge, so these should not be one-shot stories, played out in a rote, procedural manner. Give them more to do!

Also, how come the rewarded victims get to keep the money? Surely the police can figure out what Oliver did, even if Laurel tells them to keep quiet about it. As right as it may be for them to receive the cash, Oliver gets it by illegal means, which should mean that it will be taken back, and may even hurt their court case.

That being said, every single one of the characters is enjoyable. Besides the ones listed so far, there’s: Detective Quentin Lance (Paul Blackthorne, The River, Lipstick Jungle), who, considering his daughters, has plenty of reason to dislike the young Mr. Queen; Oliver’s little sister, Thea (Willa Holland, The O.C.), who is repeating Oliver’s mistakes; body guard John Diggle (David Ramsey, Blue Bloods, Dexter), who is just screaming for sidekick status; Oliver’s best friend, Tommy (Colin Donnell, Pan Am), who is happy to be cavorting with his buddy again; Queen business partner Walter Steele (Colin Salmon, The Increasingly Poor Decisions of Todd Margaret), who is now married to Oliver’s widowed mother, Moira (Susanna Thompson, King); and Moria herself, who has Oliver secretly kidnapped to try to figure out what his father told him. All of these set up plenty of plot to be explored.

And that’s why I like ARROW, in spite of its flaws. There are so many ways it can go, and even with uneven writing, the production looks fantastic, and gets the adrenaline pumping. Yes, some elements may need cleaned up a little, and better attention to detail should be paid. But there are already all of the ingredients here for something special, maybe even better than Smallville. I’m more than willing to give it a chance to improve.

ARROW premieres this Wednesday at 8 p.m. ET on the CW.