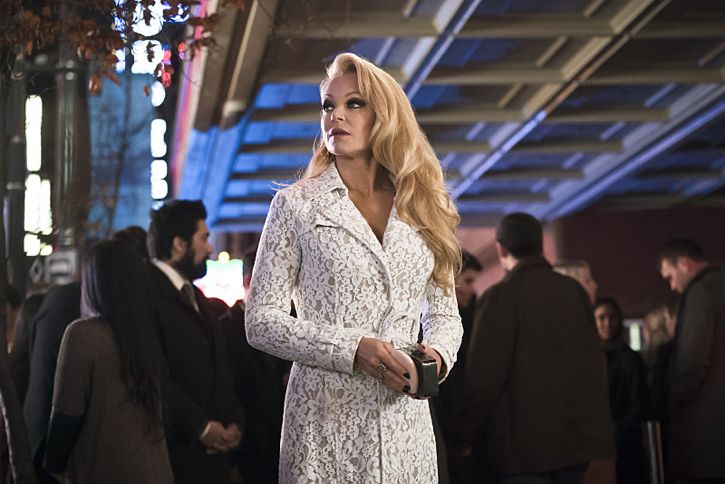 Now that Malcolm Merlyn (John Barrowman) shared Oliver Queen’s (Stephen Amell) deepest secret with Damien Darhk (Neal McDonough), it looks like H.I.V.E. is about ready to strike another deadly blow against someone Oliver cares about — but will it be Oliver’s son who ends up in the grave, or could it be Donna Smoak (Charlotte Ross)? In the flash forwards seen so far, Felicity (Emily Bett Rickards) seems bitterly angry and out for blood against Damien as well.  So with Donna eager to plan Felicity and Oliver’s wedding and blissfully unaware of how dangerous Team Arrow’s lives have become, which not only puts Felicity and Oliver in H.I.V.E.’s bullseye, but perhaps Detective Quentin Lance (Paul Blackthorne) and Donna Smoak as well.  For now, Donna is happily planning an engagement party and wedding for her daughter and the only wrinkle she can see is that her deadbeat ex-husband Noah Kuttler (Tom Amandes) has returned and tried to insinuate himself into Felicity’s life.  Even behind bars, doubtful that the Calculator aka Noah will allow his daughter to be married without him in attendance.  So Donna has every reason to worry that Noah’s return brings a dark cloud of doom into Felicity’s world.

In an exclusive interview, star Charlotte Ross talked about Donna’s rose-colored glasses view of life and how it may be shattered in the coming episodes.

What’s currently going on with the hot and heavy romance between Quentin and Donna?
CHARLOTTE:  Donna’s had a bit of a rocky road in her love-life, as some women can attest to from time to time.  I think the trick is you do not want to get hardened.  You still want to be open and optimistic in finding true love. I think that Donna, while a little naive and optimistic — and she has gotten into trouble that way — has held off from a serious relationship for a long time and I think she has let her guard down more than even she thought she was capable of with Quentin.  First of all, he is perfectly handsome looking, he works in law enforcement and he is really emblematic of someone who has a wonderful core value system in terms of being honest and trying to do the right thing.  That is something that Donna probably hasn’t been around — men like that — and she really admires that and feels safe with that kind of value system.  So I think that she is really hoping this goes the distance.  She has really fallen hard for him.

Could there be a possibility of a double wedding for Felicity and her mom Donna then?
CHARLOTTE:  Good question.  If it was up to Donna, of course!  She would do it yesterday!  But Quentin has not popped the question yet, so it depends on if and when he ever decides to do that and, of course, if their relationship progresses or not and, of course, if the engagement progresses as well.  But I can tell you straight out that Donna would have a heart-attack if that were to happen.  Are you kidding? It would be an explosion of happiness.

What do you most like and admire about Donna?
CHARLOTTE:  I really like the balance of Donna.  I’m so grateful for the kind of rainbow of emotions that are written, so I am not just one thing.  We actors love when they kind of give a well-rounded character and balance things.  I don’t want to be afraid to really go for it when she is excited.  If she was only really excited all the time, you might want to shoot her.  You know what I mean? I think it comes from a really excited innocence and really pure happiness.  But also, when she is scorned and she has to deal with the real deal, like when she finds out that Felicity’s father is in town, there is no time for silliness or over-the-top excitement.  It’s real serious shit that she has had to deal with and she deals with that in a real serious, grounded way and protective way.  I think she has had to lick her wounds in a corner a lot.  So she has had to put up this really tough exterior.  I like the balance in that she can still be optimistic and see the good in everyone, but if you cross her — or more importantly, cross her daughter — she gets really strong.

How does Donna feel about the fact that Noah has resurface and is trying to get back in his daughter’s life?
CHARLOTTE:  I loved that scene last week.  It seems like the fans really gravitated towards that scene.  Again, I really like that balance for Donna that I love so much and am so grateful for.  He left them when Felicity was quite young.  I’m not Donna in any way, shape or form, but I am a single mom and I do know the kind of idea of feeling like Mama Bear and you need to protect your child.  I’m really good friends with my ex-husband, so it’s totally different.  But I think Noah completely left Donna and Felicity.  To what degree and how bad the situation was before he left, I don’t know. But I think that when there is a lot of anger and a lot hurt, especially when you have a child involved, for that person to enter their lives again, there is a lot of feelings that come up that are really intense and whether you want to say it or do something is very real.  I would love for Tom [Amandes] to come back and to have scenes with him and Emily and look into that storyline a bit deeper because I think there is a lot of rich layers that we could explore there.

Does it every worry Donna because all of Felicity’s friends seem to be in and out of the hospital all the time that she may have fallen in with a “bad luck” crowd?
CHARLOTTE:  [Laughs] That’s a good question!  I don’t know how much Donna is aware of how much and how often they are in the hospital.  There hasn’t been the reveal yet of Donna finding out that Oliver is the Green Arrow.  I think that is really going to change and affect everything ’cause that directly affects the safety of her daughter.  Obviously, as Donna is getting more entrenched in Star City, she is finding out about how things seem to go wrong and she is going to see a lot more and get sucked into a lot more.  It will probably slowly unravel itself naturally.  But right now, I think Donna is just spinning in terms of an engagement party.  I don’t think she sees anything else.

What can you tease about what is upcoming?
CHARLOTTE:  Donna is very, very excited about an engagement party.  So if you can imagine with Donna, it’s everything down to the subtle invitations to her very subtle little dress to the decorations for the party to the games at the party.  I think she has been dreaming about this party since the day she found out that she was pregnant.  So this is very exciting and almost stressful because she is so excited.  The other thing I could say is Donna and Felicity have the most beautiful relationship in the world.  Sometimes a mother-daughter relationship can switch in an odd way where the daughter can become the one that is helping the mom and giving her advice.  Felicity is such a strong character, and sometimes Donna is strong and sometimes she is not so strong and really needs her daughter’s help in a lot of ways.  The other thing I can say is Donna relies on Lance — and what he does for a living and being a wonderful, trustworthy boyfriend — he has a lot of decisions to make because of his alignment with Damien Darhk.  I’m excited for this episode because there are a lot of great things that might happen!

To see whether the engagement party goes as well as Donna hopes or if H.I.V.E. and her ex turn it into a bloodbath, be sure to tune in for an all new episode of ARROW on Wednesday, February 17th at 8:00 p.m. on the CW.