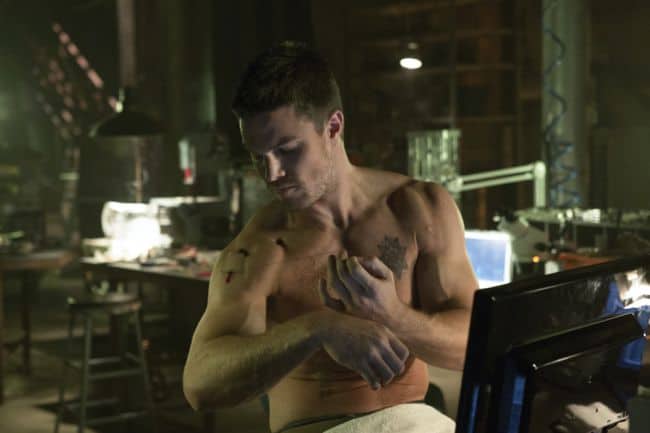 ARROW Season 1 Episode 3 Lone Gunman Promo : DC COMICS’ VILLIAN DEADSHOT SETS HIS SIGHTS ON ARROW — Oliver (Stephen Amell) is surprised when someone shoots and kills one of his targets. As his plan is to bring people to justice vs. outright killing them, Oliver doesn’t appreciate the help and searches for the gunman. He soon learns that the man, Deadshot (guest star Michael Rowe), is taking out businessmen who are scheduled to bid at an auction on an energy company and Walter (Colin Salmon) is one of the bidders. Realizing he can’t protect his family and stop Deadshot at the same time, Oliver enlists Detective Lance’s (Paul Blackthorne) help, but his plan has dire consequences. Meanwhile, Laurel (Katie Cassidy) and Tommy (Colin Donnell) get caught in an awkward situation with Oliver. Willa Holland, David Ramsey and Susanna Thompson also star. Guy Bee directed the episode with story by Greg Berlanti & Andrew Kreisberg and teleplay by Marc Guggenheim & Andrew Kreisberg (103).