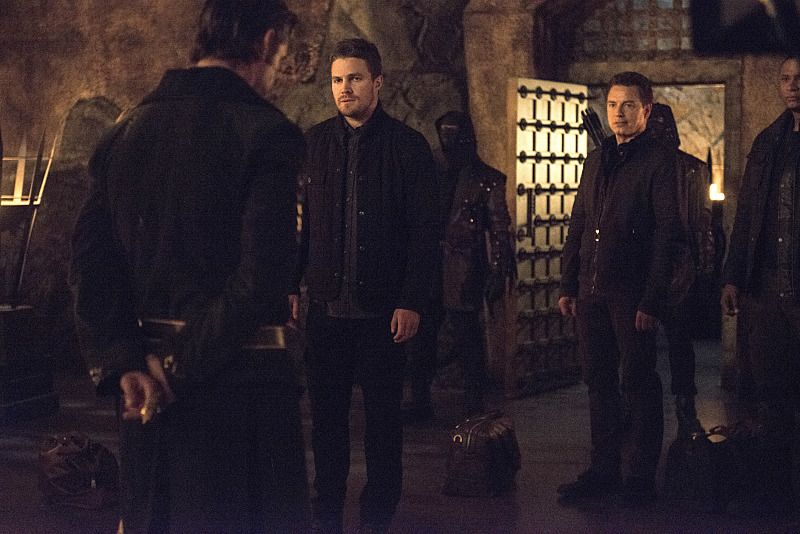 The time has come for two important steps in Oliver Queen’s journey:  the day he surrenders himself to Ra’s al Ghul (Matt Nable) as the next heir to the League of Assassins and the day he finally succumbs to Felicity’s charms.  But just what brings Oliver (Stephen Amell) to this pivotal place in his journey?  Thea (Willa Holland) — his sister and sole remaining family member.

Oliver, upon finding Thea dying on her apartment floor from Ra’s deadly attack, will move heaven and Earth to save her — even if it means giving up his freedom and taking on the mantle of being Ra’s al Ghul’s next appointed heir to the League of Assassins.  Yet before he does, Oliver will try to save Thea through more modern methods, such as a visit to the hospital.  Alas, even Starling City’s finest physicians cannot guarantee Thea’s recovery.  So Oliver, being the devoted brother that he is, takes Thea to Nanda Parbat.

Unfortunately, not everyone agrees with Oliver’s plan to sacrifice himself and save Thea by taking her to the Lazarus Pit.  Malcolm Merlyn (John Barrowman) is the most vocal opponent. He worries that Thea, once exposed to the Lazarus Pit, will not be the same girl that they know and love.  The Lazarus Pit changes people.

In addition, neither Diggle (David Ramsey) or Felicity (Emily Bett Rickards) is thrilled with the idea of Oliver becoming the heir to the Demon.  But with Oliver’s mask taken away by Captain Lance (Paul Blackthorne) in his quest to take down the Arrow and since Roy (Colton Haynes) has taken the fall for Oliver and is believed to have died in prison, Oliver is out-of-sorts anyway.  If Oliver cannot be the Arrow, in his mind, it is better to sacrifice himself as the heir to Ra’s al Ghul and save his sister.

With events unfolding quickly, there is not a lot of time.  Once Oliver makes up his mind, everyone is swiftly headed to Nanda Parbat, courtesy of Ray Palmer’s (Brandon Routh) jet — though Ray and Felicity manage to have a quiet talk about how their relationship has run its course before everyone departs.  (Side note: Kudos to Ray for being the better man and allowing his now ex-girlfriend Felicity to still borrow his jet after they break up.  That man is just too good-hearted.)

Now that Felicity is a free woman once again, and sensing this might be her final chance to declare her love for Oliver, and with a push from Ra’s al Ghul, Felicity finally bares her heart and soul — and quite a bit of her body — to Oliver.  It is supposed to be a goodbye gesture.  But fate or perhaps someone else has something else in mind and things get a bit hectic on Nanda Parbat.

For one, Thea’s descent into the Lazarus Pit does yield unexpected results and no one is sure what to make of it.  For another, Ra’s is behaving way too gentlemanly for the circumstances.  Third, well, suffice it to say, things go a bit haywire.

Just where will our heroes end up?  Will any or all be able to get away from Nanda Parbat? Will Thea ever be herself again?  Will Felicity’s charms sway Oliver from his final decision? And just what happens “the morning after”? That all remains to be seen.

My impression at the end of the episode as that there are still big events about to occur and my curiosity is stirred as to what the future holds for all of them.

For fans dying for every juicy detail, previously teased SPOILERS include:

– Felicity does NOT throw herself into the Lazarus Pit.
– Felicity is remarkably less tongue-tied than usual and surprisingly says the right thing to everyone.
– There is a fantastic Felicity/Laurel (Katie Cassidy) scene in this episode.
– Laurel has a much bigger part to play in next week’s episode.
– Roy is coming back soon to have proper goodbye with Thea.
– Nyssa (Katrina Law) is not seen, but will be in next week’s episode to react to events of this week.
– Felicity has a surprise for Oliver.
– Words to describe the Felicity/Ray scene: quiet, sad, regretful.
– Felicity is confident in declaring her feelings to Oliver. No hesitation. It’s heart-stoppingly wonderful.
– Captain Lance will not hesitate to arrest Oliver again, if given the chance.
– Saddest scene of the episode:  Oliver at the hospital. (Powerful scene and great work by Stephen Amell.)
– Words to describe Oliver and Felicity scene on jet:  quiet, thoughtful, insightful, touching, intimate, soul-bonding.
– Word that best describes Felicity and Ra’s scene:  confrontational — though Ra’s shows respect for her.
– Felicity and Oliver’s “morning after” interaction is delightful, intimate, teasing and with good humor.
– There is no mention of marriage, proposal or wedding between Oliver and Felicity in this episode.
– Words to describe Oliver and Felicity’s chemistry:  sizzling hot, scorching hot, heart-melting, take-my-breath-away.
– What to have nearby while watching Oliver and Felicity’s sex scene:  champagne, maybe a fan and ice cubes.
– There are no scenes with Caity Lotz as Black Canary in this episode.
– There is a great Diggle and Maseo scene.
– Oliver and Diggle’s bromance is stronger than ever throughout the entire episode.
– Ray Palmer’s story not done yet and will be around. (Fingers crossed for pick up of his spinoff series!)
– My reaction to this episode: my heart burst from happiness, then felt a brief moment of sadness.
– There is a rather fun Felicity/Malcolm scene (not romantic).
– Barry Allen (Grant Gustin) does not pop up in this episode, but should make another appearance in Starling City soon.
– There’s dark days ahead for Oliver and Diggle as they confront what’s next after this episode.
– Thea is not the same girl we knew.

With all those teasers rolling around your brain, be sure to tune in for this week’s new episode “The Fallen” and the remaining three episodes of Season 3 on Wednesday nights at 8:00 p.m. on the CW.  The Season 3 finale will air on May 13th.  You are warned:  don’t miss a single second of it!