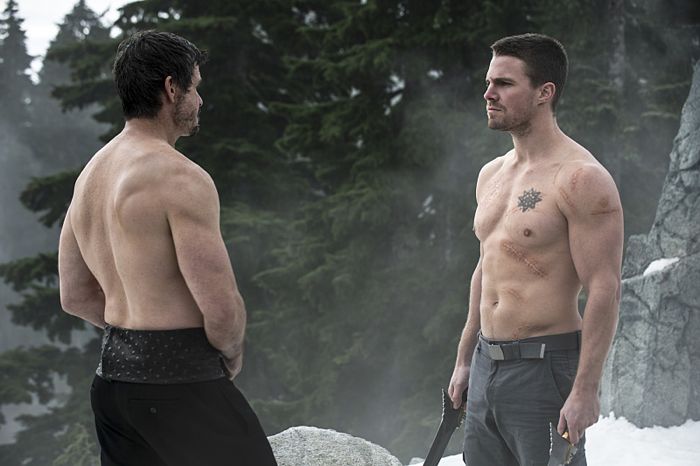 Last night’s ARROW mid-season finale on the CW, entitled “The Climb,” is a big one for the series. Ra’s al Ghul (Matt Nable, Riddick) comes to town to demand that Team Arrow find Sara’s killer within forty-eight hours or his League of Shadows will begin slaughtering innocents. It’s an effective motivation, as if our heroes needed one, but things only get worse when Oliver (Stephen Amell) learns the identity of the murderer, and in the end, tragedy strikes when he tries to protect the assassin.

It’s hard to blame Thea (Willa Holland) for Sara’s death, even after video of her doing the deed is shown in “The Climb,” removing any doubt that she actually did it. She has got to be drug-controlled, right? I mean, that seems the most likely explanation. Thea knows Sara and wouldn’t intentionally harm her. Unless Thea didn’t know who was behind the mask and was convinced by Malcolm (John Barrowman) that Sara was a threat to innocents and some sort of test to finish her training. But it was probably the drugs.

If Malcolm did convince Thea to willingly kill Sara (without revealing it was Sara in the costume), this would not be unprecedented. Oliver himself is driven to do things on the island and after that he regrets. With the right conditioning and controlled development, a supervillain can get a good person to do the wrong thing. It takes years and lots of love to bring Oliver back from that brink. Maybe Thea is there now, and needs saved, too.

Whether or not Thea knows what she did, she is keeping things from Oliver about Malcolm. It’s hard to blame her for that, too, though. After all, Thea’s whole family has lied to her time and again. Oliver may be doing so in order to keep Thea safe, but she doesn’t know that. Turnabout is fair play, and Thea can treat others the way they treat her without being a horrible person. In some ways, Oliver deserves it. Besides, she doesn’t know the full story about Malcolm and he’s a good liar, so she could be reasonably falling for a whole load of bull.

It’s ironic that Oliver has found his humanity again at the exact time he needs to lose it. Before Oliver goes to face Ra’s al Ghul in combat in “The Climb,” a choice he makes to save Thea, Felicity (Emily Bett Rickards) begs Oliver to kill Ra’s al Ghul. Oliver may not do that since he’s not a killer any more, but in this situation, might he make an exception? After all, as long as Ra’s al Ghul is alive, there’s the change that he could always find out the truth and Thea would be in danger. That murdering Ra’s al Ghul also protects Malcolm is an unwanted side effect.

We may never know if Oliver would kill Ra’s al Ghul, though, because Ra’s appears to kill Oliver first. The show is called ARROW and Oliver is The Arrow, so it’s likely Oliver will somehow survive being stabbed and tossed from a cliff, as far-fetched as that seems. But imagine for a moment that the show makes another choice. Heroes do die in the comic books and others rise to take their place. Roy (Colton Haynes) is Oliver’s apprentice and so a natural choice, or Diggle (David Ramsey) could take over. These would be shocking developments, and I’m fully in support of either option, though I doubt The CW will allow it. Either way, what a shocking conclusion!

Still, assuming Oliver does live, it will only more firmly establish his role as a hero, something ARROW has done and needs to continue to do over time. He will also have to face that fact that he told Felicity he loved her, and maybe they can finally get over their silly avoidance one a relationship. After all, Ray (Brandon Routh) hasn’t stepped up to be the lover he could be for Felicity, so Oliver may still have a chance.

“The Climb” also has some excellent tidbits with long-reaching effects. Ray reveals the A.T.O.M. suit, which fans of comics will recognize. Thea’s fight with The Arrow is pretty cool. And grieving mother Dinah Lance (Alex Kingston) stupidly, and understandably, gives Laurel (Katie Cassidy) more than her permission to avenge Sara’s death. Dinah shouldn’t be encouraging Laurel into danger, but if Laurel can handle the quest, and she likely can, it would be satisfying for Dinah to have her daughter’s killer stopped, as well as give Dinah even more pride in Laurel if she is the one that does it. The problem here is that said killer is Thea, but surely taking out Malcolm would serve the same purpose and be a better result, no?

ARROW goes out strong with “The Climb,” capping a solid fall run. There are more unnecessary flashbacks, but other than that, it’s hard to find flaw with the way the episode unfolds. I can’t wait for the show to return.

ARROW will be back on the CW this January.