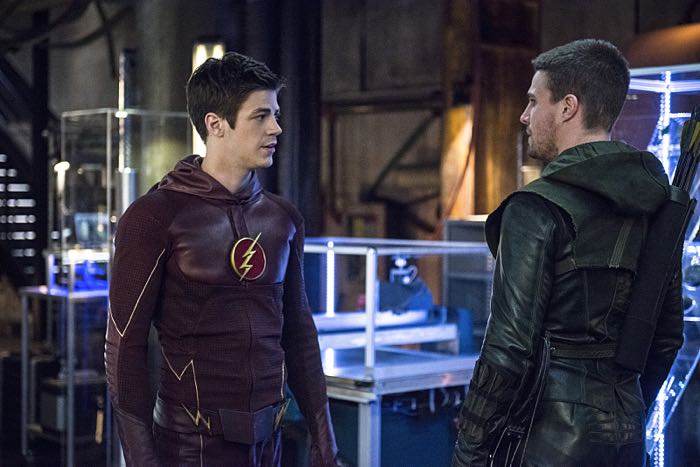 On this week’s installment of the CW’s ARROW, “The Brave and the Bold,” Oliver (Stephen Amell) and company get one step closer to figuring out who killed Sara, with a little help from some friends. It’s a crossover event that works well by serving ARROW’s main player more than the guest stars, using the visitors effectively, and handling a matchup with grace.

When I first heard about the ARROW / The Flash crossover, I was skeptical. That sort of thing is usually a stunt, which values showiness over quality. When the ads starting airing, billing this as being Arrow vs. The Flash, that seemed even worse. Why does the network need to pit two superhero friends against one another? Yet, what ends up emerging in the actual broadcast are two separate, excellent stories that highlight the similarities and differences between the series, while still staying true to the show they take place on.

The Flash’s first hour is very different in tone than ARROW’s second outing. ARROW is dark and gritty, firmly rooted in reality since its titular character has skills, not powers. The Flash is fun and flashy (pun intended), in keeping with the spirit of the young man who accidentally gains super speed. When Oliver visits The Flash, he seems out of place because he’s too serious for that world. When The Flash visits Arrow, he seems out of place because he takes things too lightly. They are perfectly matched to their own environments, and it’s clear that while The Flash may be a spin-off, it is also its own thing.

In The Flash episode, Oliver tries to teach Barry (Grant Gustin), a.k.a. The Flash, to be more aware of his surroundings, training him to be a better crime fighter. It’s a great scene, but it’s even better when Barry tries to apply this lesson in “The Brave and the Bold.” It’s a little corny that he thinks he’s mastering those skills after only a week of practice, but I like the interplay between the two, and how they learn from one another, Barry helping Oliver find his buried humanity.

Oliver may be serious and use brutal tactics, but that doesn’t mean he doesn’t care about people. We’ve seen him go from killing the bad guys to only wounding them to get information, and he acts selflessly to save innocents. Part of this is because Team Arrow is helping to humanize its leader, Oliver’s friends reminding him that there are consequences to his actions and challenging him to be a better man. Having an outsider like Barry come in and reinforce that trend, able to make a more distanced judgment, allows Oliver to really see himself as others see him and extend that change.

It’s also loads of fun to see the two teams intermix. Cisco (Carlos Valdes) and Caitlin (Danielle Panabaker) are appropriately impressed with Team Arrow’s hideout, being the geeks that they are. Felicity (Emily Bett Rickards) makes some improvements in The Flash’s base, and Cisco returns the favor. The chemistry between this mix is charming, and I love that Roy (Colton Haynes) is so amused by the newcomers. I also love the casualness in how Barry accidentally reveals his identity to someone. Basically, any scene in which several main characters from both shows are together, “The Brave and the Bold” shines.

As mentioned, this ARROW installment does have its own semi-self-contained story. The villain from The Flash doesn’t carry over, which is smart because it doesn’t make sense for that to happen. Instead, The Flash characters visit more naturally, just anxious to see the base, and end up getting involved in Oliver’s investigation of a former A.R.G.U.S. agent because they are there.

The bad guy, Harkness (Nick Tarabay, Spartacus: War of the Damned), a.k.a. Captain Boomerang, is a very dangerous man. The fight scenes with him are intense, and he certainly poses a challenge to the efforts of everyone combined, which proves more team-ups might just not be welcome, but necessary in the future. He also brings Lyla (Audrey Marie Anderson) further into the series’ story, which is great because she’s someone who really matters to Diggle (David Ramsey) and whom we haven’t seen enough of. She’s a valuable connection for the team to use.

At the end of all that, a showdown between The Flash and The Arrow is promised, but not shown. How can it be? In The Flash episode, they fight for a justifiable reason, Barry being under the influence of a bad guy, and they seem pretty evenly matched, which satisfies both fan camps. When they go to rematch, just for fun, it isn’t shown. Neither fan base wants to see their man lose, and there are many crossover viewers who can’t root for either to fail. It’s better to assume they both have their strengths and weaknesses and are both heroic men.

The flashback this week, seeming even more unnecessary than normal because I wanted to keep getting back to seeing the casts together, who has a limited window to play in, is actually pretty relevant. It illustrates Oliver’s loss of humanity at the same time Barry is helping Oliver realize he’s finding it again. As well as that fits together, though, it would be better to drop it and have some more bits of Cisco and Caitlin with Roy and Felicity.

The ARROW / The Flash crossover seems to me an unqualified success. It’s also structured in such a way to allow many such repetitions of the event in the future without seeming forced or hokey. Let’s hope the writers and producers make that happen, as difficult as it might be to do, production-wise.

ARROW will air its mid-season finale next Wednesday at 8 p.m. ET on the CW.