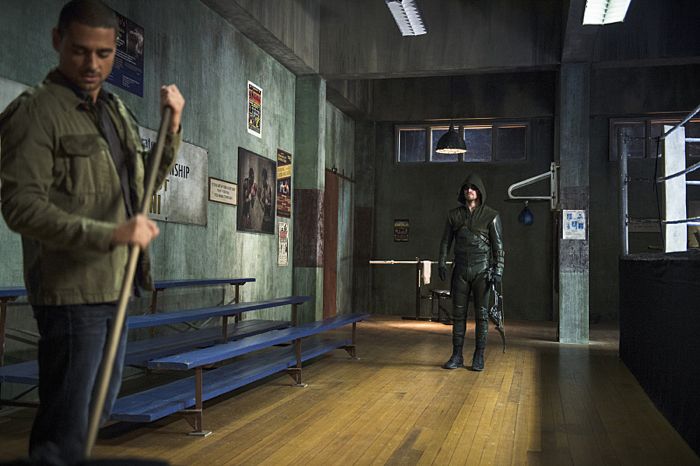 The CW’S ARROW proclaims someone “Guilty” this week when a serial killer begins slaughtering criminals. Suspicion immediately falls on Ted Grant (J.R. Ramirez), who is seen on the scene of multiple murders and who, it turns out, used to be a vigilante himself, like The Arrow. Laurel (Katie Cassidy) is sure Ted is innocent, but could that be because she’s developed a loyalty during her training sessions and so is blinded to the truth?

It’s hard to believe that Oliver (Stephen Amell) doesn’t take Laurel at her word immediately when she says she is with Ted during a murder. After all, Laurel and Oliver have a long history together and he even trusts her with his secret identity as The Arrow. Why would she by lying to him now? She has been a little erratic lately in seeking vengeance for the death of her sister, but I still don’t think that should cast doubt about her words in a totally unrelated matter. It’s just poor writing.

It is neat to learn about Ted “Wildcat” Grant’s past. He serves as both an inspiration and a cautionary tale to Oliver. Ted was tough enough to handle the city’s scum, but he had an apprentice named Isaac (Nathan Mitchell, Tide Waters) who crossed a line, and is the one framing Ted in the present. As Oliver thinks about Roy’s (Colton Haynes) woes and how young Speedy has strayed from the path, it’s easy to see the parallels between the two men’s situations.

Unfortunately, ARROW isn’t completely solid on the storytelling here, either. Roy asks Oliver not to give up on him and Oliver says “Never,” as he should. Then, immediately Roy wants to hang up his superhero suit. Is Roy asking Oliver to not give up on him personally? If so, that’s not clear. The handling of this is a bit murky when a few tweaks would have made it solid. Also, the transition of Roy from Speedy to Arsenal is a bit heavy-handed when coming up with the new name.

Roy’s big issue in “Guilty” is that he’s being haunted by dreams of murdering Sara. He eventually confesses to first Felicity (Emily Bett Rickards), then when Felicity indicates Roy may have actually done it, to Oliver, Laurel, and Diggle (David Ramsey). This is a major step for Roy, but one that his character has earned in his growth. He is willing to take responsibility for his actions, even those he isn’t entirely in control of. He’s ready to turn himself over to the authorities so that Sara will get justice, even though it wouldn’t be justice for Roy. Excellent Roy moment.

When Roy realizes he didn’t kill Sara, just a cop, the fact that his guilt quotient remains high is terrific. This proves Roy really is a compassionate person, above and beyond worrying about his friends. I think Oliver can help Roy get over the guilt and I hope Roy lets him do so, but another excellent development for the sidekick.

I’m disappointed that Diggle turns on Roy so quickly, arguing that justice must be applied equally to friends and foes. Diggle is fully aware of the Mirakuru drug and what it can do. He also knows Roy, a man who would never kill an innocent. Why can’t Diggle be the least bit understanding of the situation? Why does he think Roy should be punished and kicked out of the group? It’s a stretch for ARROW to do this.

Now, Laurel turning on Roy, that I would understand. It’s her sister that is dead, and emotion over something like losing one’s sibling can override common sense. “Guilty” doesn’t reveal if Laurel will blame Roy or not. But then Roy is cleared, so he should be safe from her. Not so for whoever the actual murderer is because, despite Oliver reiterating that Laurel shouldn’t be training, she goes back to Ted at the end of the episode and carries on.

The scene in which Oliver tells Laurel he never sees her as helpless, he just tries to protect her because he cares, is a great one. It’s a charged moment between the two exes, and one that holds out hope there could be a rekindling at some point, though they’re not on the same page right now. It’s also a testament to how Laurel has changed over the course of ARROW to be much more than a damsel that needs rescuing. The pictures that the CW released yesterday of Laurel donning the Black Canary outfit (below) should continue this nicely.

There’s also another completely unnecessary flashback of Oliver in Hong Kong this week. It does deal with memories and such, which ties it to the main plot of “Guilty,” but the episode could easily have proceeded without them and not lost a thing. I’ve said it before and I’ll say it again, it is past time for ARROW to drop this element.

“Guilty” is a bit uneven, as shows on the CW in general and installments of ARROW in particular tend to be, but it’s still got some good stuff in it, especially where Laurel, Roy, and Oliver are concerned. As long as the show sticks to its character development and allows continued growth, it’ll remain worth watching. 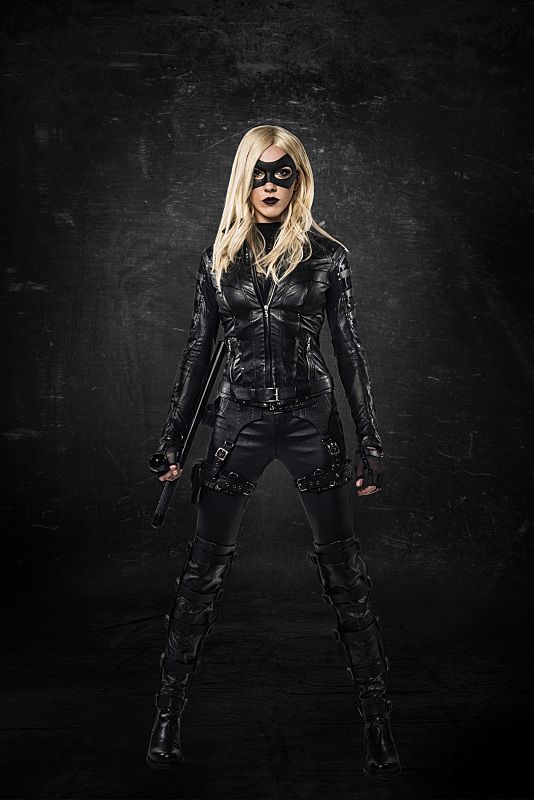