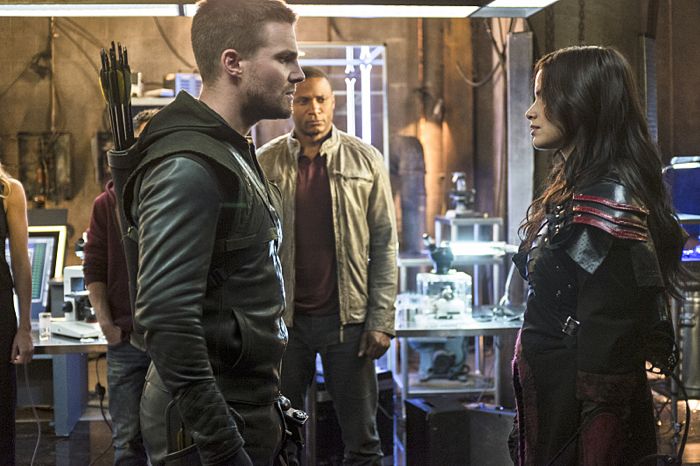 This week’s episode of the CW’s ARROW, “The Magician,” picks up right where last week left off, with Nyssa al Ghul (Katrina Law) standing in Team Arrow’s base, an arrow pointed at our heroes. Fans of the show know why she’s come; her love, Sara, is missing, and Sara is last known to be in Starling City. We also know what happened to Sara, short dead by an archer. Is Nyssa here for justice or revenge?

I don’t think most people believe Nyssa will shoot Oliver (Stephen Amell) or the others, at least without good reason, and it’s clear very quickly she doesn’t believe they did Sara harm. They are Sara’s friends. Plus, Oliver tells Nyssa the truth right away, and offers to help hunt for the killer, since Oliver has already been looking. Nyssa declines, blinded by anger and grief, but it’s not too tense a scene, and kind of a wimpy cliffhanger.

Since Oliver and Nyssa are both looking into the same thing in “The Magician,” their paths can’t help but cross anyway. Much of “The Magician” concerns their hunt for the responsible party, and while they do not find them, tension does eventually erupt between them. Nyssa suspects Malcolm Merlyn (John Barrowman) of being guilty and Oliver steps in to protect him. Now, Nyssa has her father, Ra’s (Matt Nable, Riddick), and his League of Shadows mad at Oliver, which surely will lead to further conflict.

It’s always sad when good guys are at odds with one another. The League of Shadows isn’t completely altruistic; they are a group of assassins, after all. But considering Sara, a likeable, noble character is part of their contingent, they can’t be all bad. With Team Arrow and the League at odds, players who don’t deserve to get hurt very likely will.

Why does Oliver protect Malcolm? He’s a horrible dude who has done horrible things, responsible for many unwarranted deaths. Yet, he is also Oliver’s sister’s father, who steps in to protect Thea (Willa Holland) when she’s in danger. Perhaps Oliver feels that the more people looking out for his sibling, the better? Especially when one of those protectors is as capable as Malcolm? Still, it has to cost Oliver something to stand up for a guy so undeserving, someone who should be behind bars.

It’s really interesting how Thea lies to Oliver about Malcolm. She is angry for a very long time at the secrets Oliver and her mother keep from her. She makes peace with Oliver’s continued evasiveness, given the story he tells her earlier this season, but for her to keep the things she knows about Malcolm from Oliver is a turn for her character. I guess as she moves into that darker realm, training under Malcolm as a fighter herself, she starts to see the need for secrets. Or she’s just lost a bit of her soul and no longer cares. It’s a shame to see Thea go down this path, but it’s also understandable, given what she’s been through.

This does mean Thea probably won’t be getting back with Roy (Colton Haynes) any time soon. Sure, she’ll give him a job, and it’ll be nice to see them working together, but Roy is now a Goody Two-shoes who is honest and always does the right thing. He and Thea have reversed their roles, which means they are still out of sync with one another. They could be destined for a happy ending, but ARROW is nowhere near that point right now.

Speaking of people who have flipped, Laurel’s (Katie Cassidy) behavior is worrying. She still won’t tell her father, Quentin (Paul Blackthorne), that Sara is dead. Neither Nyssa nor Oliver understand this choice, but acknowledge it’s her decision, not theirs. Even with Quentin’s heart condition, though, it doesn’t seem a good idea to keep him in the dark. He’s in semi-regular contact with Sara and eventually he’ll figure out that something happened to her. He’ll be really pissed, then, knowing Laurel has explicitly lied to him about Sara.

“The Magician” is a fun little hunting episode with some decent character development, especially as it pertains to Sara’s death. As usual, the flashbacks in the hour feel completely unnecessary, but that’s a staple of ARROW at this point, so they’re probably not going away any time soon.