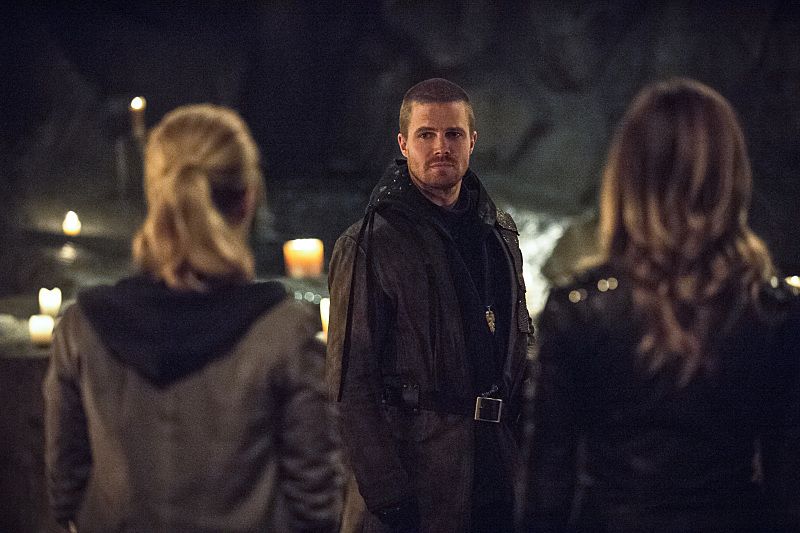 With only an hour left in this crazy, crazy season of Arrow on the CW, Al Sah-Him (Stephen Amell) has only two tasks left before he can become Ra’s al Ghul. But Malcolm (John Barrowman) suddenly claims that Al Sah-Him is still Oliver, executing an elaborate ruse. With everything Al Sah-Him has done, from kidnapping Lyla to almost killing Nyssa (Katrina Law) and Diggle (David Ramsey), it doesn’t seem likely Malcolm is telling the truth. Plus, Malcolm is a known liar. Should Team Arrow take a chance and trust him in “This Is Your Sword?”

It turns out, Oliver is still in control of his actions. I’d say that is unrealistic, given how far Oliver has gone, and I definitely question the scene in which Oliver maybe thinks he slaughters Diggle, but Oliver is known to go to extremes. If he believes a cause is important enough, he will sacrifice far more than most, totally committing to a mission. Because of this personality trait, I can see how Oliver may have been playing a game the entire time.

It’s not a game anymore in “This Is Your Sword,” though. Malcolm leads Team Arrow in an assault to stop Ra’s (Matt Nable) from unleashing a deadly virus on Starling City. The battle is an awesome sequence, with Laurel (Katie Cassidy) getting a great dig into Malcolm, Felicity (Emily Bett Rickards) wrongly believing she has killed with an iPad, and The Atom (Brandon Routh) spectacularly saving the day. In the end, though, Tatsu (Rila Fukushima), who joins Team Arrow in the assault, executes Maseo (Karl Yune), releasing him from The League to be at peace with their daughter, and everyone else is captured.

In Nanda Parbat (which, despite the plane ride, must be one county over given how often travel to and from it happens), Oliver begs the others to believe him, but even Diggle is having none of it. Diggle is blinded by anger as to what Oliver has done, thinking he has gone too far in keeping his cover, and thus has crossed the line into unforgiveable territory. It’s a real shame to see the best friends at such odds. I wish Oliver had been able to let Diggle into the plan earlier, rather than team with Malcolm. But Oliver knows Diggle would try to stop some of the things he’s doing, while Malcolm does not. So even if Oliver succeeds, will he have a home to go back to?

To Oliver, it probably doesn’t matter if he loses everyone or not by “This Is Your Sword.” That’s not to say he doesn’t care, and I don’t for a single second believe that Oliver let Ra’s kill all his friends with the virus. But Oliver clearly has made peace with the necessities of what he is doing. If losing his cherished relationships is the price he must pay in order to save tens or hundreds of thousands of lives, he’s prepared to do so. He truly is the hero of ARROW.

Does that mean Diggle and the others are not heroes, since they aren’t willing to go as far as Oliver? That’s a tough question to answer. On one hand, how far can a hero go to pretend to be on the dark side without losing the essence of good? Do the ends justify the means? On the other, Oliver is still saving lives that he may not be able to, playing by Team Arrow’s rules. I think this chasm can be bridged next season, but there’s a long way to go until Oliver can be back in anyone’s good graces.

Malcolm is definitely not a hero. He agrees to help Oliver because Thea (Willa Holland) is in Starling and could be one of the dead. But captured by Ra’s, Malcolm wastes no time in selling Oliver out. Ra’s may or may not believe Malcolm, but the last step of Oliver’s plan will certainly be that much harder to carry out after this betrayal.

Ray is a hero, giving of himself for a woman who doesn’t love him. He even gifts Felicity the company, though she doesn’t realize it yet. I’m glad Ray is continuing in the spin-off, since his time on ARROW seems nearly over.

Thankfully, Thea is far away from all of this. She tracks down Roy (Colton Haynes), now living as “Jason,” and reconnects with him, emotionally and sexually. When she wakes in the morning, though, Roy is gone and his suit is still there, giving Thea is blessing to take on the Arsenal mantle. He doesn’t want to hold Thea back and doesn’t see a way to return. I don’t agree with Roy’s decision, but it makes sense for his arc for his departure to be real in “This Is Your Sword,” as regrettable as that may be for the show, and at least Thea gets to see him one last time.

There are flashbacks again, even more unnecessary than ever. Viewers can glean from the present events that Maseo and Tatsu lose their son to the virus. We don’t need to see Oliver and Maseo fail to find a cure. These become more and more unnecessary with every passing year. I hope they are ditched entirely in the very near future.

ARROW’s season finale, airing next Wednesday at 8 p.m. ET on the CW, is sure to be tense and satisfying. Don’t miss it.