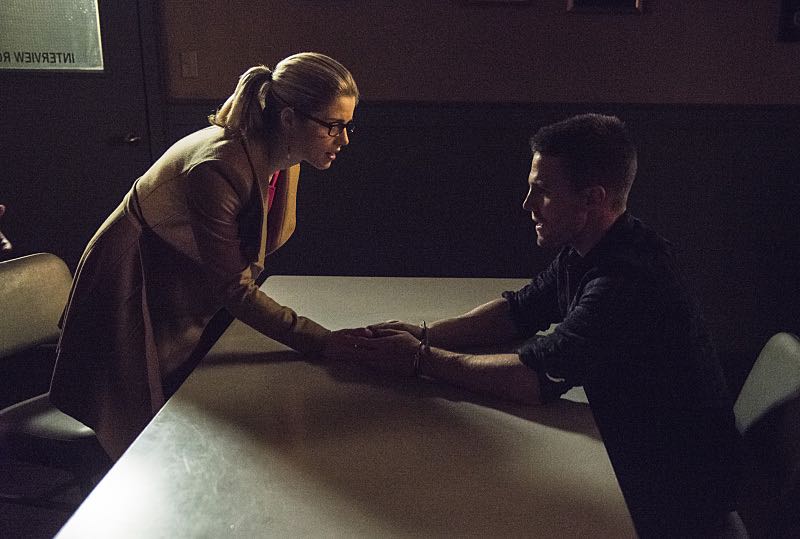 The CW’s ARROW took an already crazy season and made it insane in last night’s episode, “Public Enemy.” When Ra’s al Ghul (Matt Nable) fails to get Oliver (Stephen Amell) to take the offered mantle, he decides to reveal to Quentin Lance (Paul Blackthorne) that Oliver is The Arrow. Quentin, who is still reeling from learning of his daughter, Sara’s, death, shares the secret on television and turns the whole city against our hero. What will Oliver do?

The third year of ARROW has been the best of the series thus far, constantly letting its story make huge leaps, rarely in an expected direction. By freeing the writers to do whatever they want with the characters, or so it seems, the show has cast off any type of formula or traditional structure and made it feel like a real world with real stakes. In reality, there are always more players than the handful a TV show can follow, and motivations are not easily quashed. Arrow embraces this and is better for it.

A prime example of this is Quentin Lance. The poor man has suffered so much, losing a daughter, finding out she’s actually alive, and then losing her all over again. Add to that, his surviving child, Laurel (Katie Cassidy), is doing the same thing that got Sara killed and she lied to her dad about it, and he’s reached a breaking point. He’s truly a good man, as we’ve seen in the past, and he’s smart, admitting he always suspected Oliver of being The Arrow. Yet, in his current emotional situation, he wants to punish someone. Oliver is the unfortunate target of that punishment, and Quentin is so devoted to carrying it out he will burn any bridge on his way to do so.

Oliver has a hero complex, as we know, and the further along his path he goes, the less selfish he becomes. In early episodes of Arrow, Oliver is willing to kill others and protect himself. Now, he’s concerned about his family and friends and his mission, much more so than he is about himself. Only the most noble of people would turn themselves into the police, especially when it’s debatable if Oliver deserves to be jailed. His long-standing guilt likely contributes to this decision, too, though most will see what he is doing as heroic.

But Oliver isn’t the only one in this vein. Roy (Colton Haynes) believes he deserves to be in jail, and so he tries to convince the police that he is the real Arrow. It’s unknown at this time if Quentin will buy this Spartacus-esque play. However, Roy dressed in the suit and stopping the police van is a development that makes total sense for the character, even as it makes the plot of “Public Enemy” more chaotic.

I don’t trust Nyssa (Katrina Law). She presumably helps Team Arrow, and does assist Laurel in escaping her dad, but she’s the one who sends Oliver into Ra’s trap. It could be that she doesn’t know that’s what she’s doing; ARROW doesn’t show us one way or the other if she’s complicit in her father’s plans. Until we see her do something against Ra’s, though, more than we’ve seen this far, I don’t think Oliver should be listening to her.

There’s a great subplot where Ray (Brandon Routh) is shot by Ra’s and lies in a hospital bed. Bureaucratic rules prevent the doctors from doing anything for him, so Felicity (Emily Bett Rickards) sneaks Ray’s tech in and saves his life. Yet, as Donna (Charlotte Ross) points out to her daughter, Felicity is in love with Oliver, not Ray.

“Public Enemy” neatly brings this love triangle to a close in the way it needs to. Ray is a great recurring guest star, but he’s heading to the new spin-off next year, and Felicity belongs with Oliver, no matter how long it takes the couple to get started. Donna isn’t strictly necessary for this story, but she has a way of speeding things along, and she’s so enjoyable, who can complain about her presence?

As stated above, “Public Enemy” is a terrific installment that once more expands ARROW’s story in major ways. It is exciting, fast-paced, and full of surprises. It serves the characters in an authentic way, and continues the serial story appropriately. Now, if only ARROW would drop the boring Oliver flashbacks that persist in most episodes.