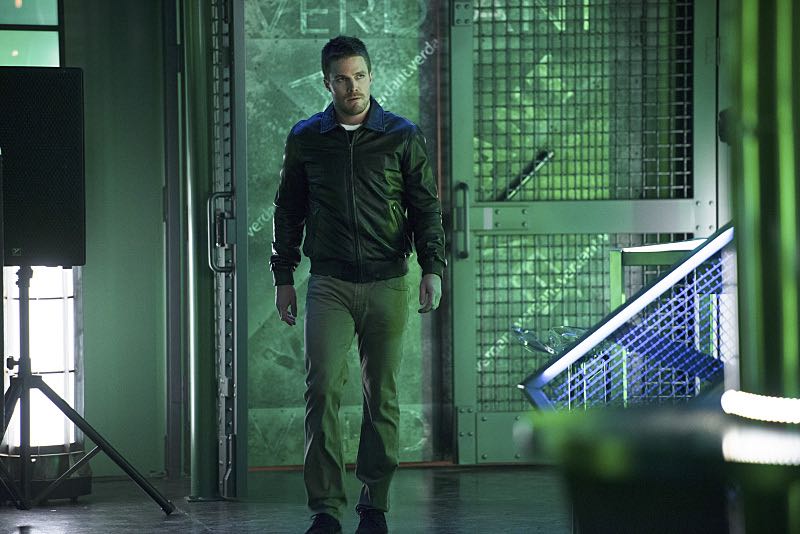 The CW’s ARROW (Stephen Amell) has a big decision to make when considering “The Offer” he receives last week, the subject of the most recent episode. Ra’s al Ghul (Matt Nable) wants Oliver, a.k.a. The Arrow, to take over the League of Assassins as the next Ra’s. Will Oliver give up his current mission for this new one? Will Ra’s let it be a choice?

Oliver is feeling pretty down through much of “The Offer.” Felicity (Emily Bett Rickards) is with Ray (Brandon Routh) now, though she reminds Oliver it is his choice she and he aren’t together, and Captain Lance (Paul Blackthorne) turns on the hooded archer because of the secret Oliver keeps concerning Lance’s daughter. Oliver can’t come clean to Quentin that the decision to reveal the truth rests with Laurel (Katie Cassidy), Quentin’s surviving daughter, because it would unmask The Arrow’s identity and throw someone Oliver cares about under the bus. So Oliver doesn’t feel like things are going very well for him.

But why is he The Arrow? That’s the question posed this week, and the one Oliver isn’t sure of at first. The rest of his team find their motivation when they believe Oliver to be dead. Now, it’s his turn. Is he looking for gratitude? Is he just doing what’s right? In the end, he saves the city because he is honoring his own deceased father and because he wants to promote justice. That’s enough for him, leading him to turn down Ra’s offer because, even though Ra’s says Oliver could change the moral code of the group if he wants to, how would you stop a whole league of assassins from killing?

The thing is, though, while Ra’s presents the title as a choice and tries to bribe Oliver by setting Diggle (David Ramsey) and Malcolm (John Barrowman) free with “no strings attached,” these are ploys. Ra’s thinks Oliver will come to the decision to accept on his own, and when Oliver does not, Ra’s begins to try another tactic, discrediting The Arrow’s good name. Ra’s is a sneaky bastard, and any thinking that Oliver might actually be taking over for a misunderstand man is erased. Ra’s is as ruthless as everyone believes he is, and while Oliver could be a different Ra’s, this one will not change.

Ra’s is the only one disappointed by Oliver’s refusal. Felicity and Diggle certainly don’t support Oliver going down a path that could lead him back into bad habits. Nyssa (Katrina Law) wants the job herself, though Ra’s seemingly either casts her out or challenges her to take it. Nyssa then helps Team Arrow and offers training to Laurel, which is her either trying to fit into a new group, or fishing for information she can use to be Ra’s. Either way, since Oliver doesn’t want the position and Nyssa does, it seems an easy solution could be found, if only Ra’s himself weren’t so stubbornly set on Oliver.

Besides all of the morality issues, “The Offer” is full of father / daughter drama. Ra’s and Nyssa, of course, have a falling out. Either that, or this whole thing is a ploy Ra’s designed to force Nyssa to step up. Quentin will not forgive Laurel nor listen to her reasons for keeping him in the dark about Sara’s death. And Malcolm actually urges Thea (Willa Holland) to kill him, something she resists, proving he has not ruined her.

Thea’s struggle is the most played upon this week. She could very easily slip over to the dark side, but every time she has a chance to, she resists, showing great strength of character. On the other hand, Malcolm overhears much of what is said in the apartment, so he knows the depth of his daughter’s hatred towards him. This makes for good pathos, and will likely drive Malcolm forward in his next plot, even as Thea seeks to close a chapter and return to a normal-ish life. With Roy (Colton Haynes), happily.

“The Offer” is a relatively slow hour, but ARROW continues to not disappoint. Besides a lame, thankfully brief, flashback sequence, there is little to complain about in this installment. “The Offer” asks some big questions, and gives a number of characters chances to really shine in acting. This isn’t an A-list cast, but the material is clearly tailored well to them, and they’re killing it, in the best of ways. ARROW has found freedom in its storytelling structure this year that it doesn’t have as much the first two seasons, and the only thing I’m certain of for the rest of the year is that the show will be good, as the plot has gotten rather unpredictable.