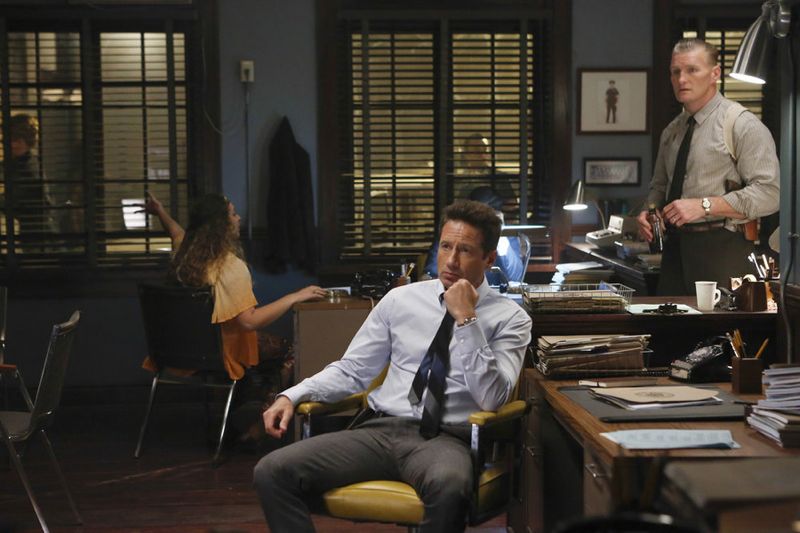 NBC’s new drama, AQUARIUS, premieres tonight. Set in the 1960s, it is inspired by the real-life story of cult leader Charles Manson, who manipulated women into sex and murder in Los Angeles. Because this is modern American broadcast network television, the show also stars the officers of the law who are tasked with taking Manson down. As if we need another cop show, even one that is, admittedly, a little different than most.

The first thing that strikes me about AQUARIUS is that, in structure, it is virtually identical to FOX’s The Following. Both series feature a cop with a younger sidekick who share the screen with a dangerous man who is seducing and influencing weak-willed followers into doing his dirty work for him. There are differences between the two programs, but they are almost all superficial, boiling down to the same base.

The problem with drawing this comparison is, AQUARIUS is inferior in virtually every way.

Mistake number one is the setting. It is extremely easy to fall into cliché when depicting the 1960s, and AQUARIUS does this a lot. The costumes and dialogue reflect cheesiness, much more so than is believable. When our leading man, Sam Hodiak (David Duchovny, Californication, The X-Files), is schooled by his partner, Brian Shafe (Grey Damon, Friday Night Lights), on the new Miranda rights, it feels like a heavy-handed attempt to remind us of where we are, and all the hippie clothing and pot smoke is nothing better than cartoonish.

But AQUARIUS doesn’t even commit to a full-fledged 60s stereotype, instead overlaying it with a very dark noir, the messed up detectives getting seedy in order to catch the crooks. This is especially evident with officer Tully (Claire Holt, The Vampire Diaries), her role being the epitome of a put-upon woman, and her actions reflecting that she sees herself as the second-class citizen that the men do.

I’m not complaining that AQUARIUS takes place in the 1960s; that would be foolish given that it is based on true events, and it would be worse to rewrite the tale with a modern take. What I’m complaining about is the design and approach the production takes towards this era. The setting is more than a time and a place, and the way this show tackles it is bad.

Overall, the cast is solid. Duchovny, in particular, is immensely watchable, no matter how poorly constructed his part is. Damon, Holt, Emma Dumont (Bunheads) as the main girl, Emma, that we see fall into Manson’s trap, and Brian F. O’Byrne (Flashforward) as her father, are all serviceable. A step below them is Michaela McManus (Law & Order: SVU) as Emma’s mother and Beau Mirchoff (Awkward.) as Emma’s boyfriend at the start, but they still do a decent job, too. I’ve seen them all in other projects, though, and they’re usually much more compelling than they are here, which I’m assuming is because of the material.

Manson himself is played by Game of Thrones’ Gethin Anthony, and again, while I like the actor, I’m not sold on the part. I can see how this Manson lures the girls in, but am less convinced of the threat he poses. Anthony doesn’t play Manson as scary, and I feel like AQUARIUS needs that element of horror in order to drive story tension. Without it, the plot sort of plods along with little urgency or direction.

I think NBC knows this one isn’t destined to be a hit. They’re dumping the entire thirteen-episode run on their website after tonight’s premiere, available for all to binge watch at their leisure (or at least for the next four weeks). That may be a gamble to drive word of mouth, but more likely, they don’t expect anything out of AQUARIUS and it’s an easy way to get rid of the product in short order, whether they end up airing the whole thing or not.

AQUARIUS airs Thursdays at 9 p.m. ET on NBC, and is available at NBC.com.