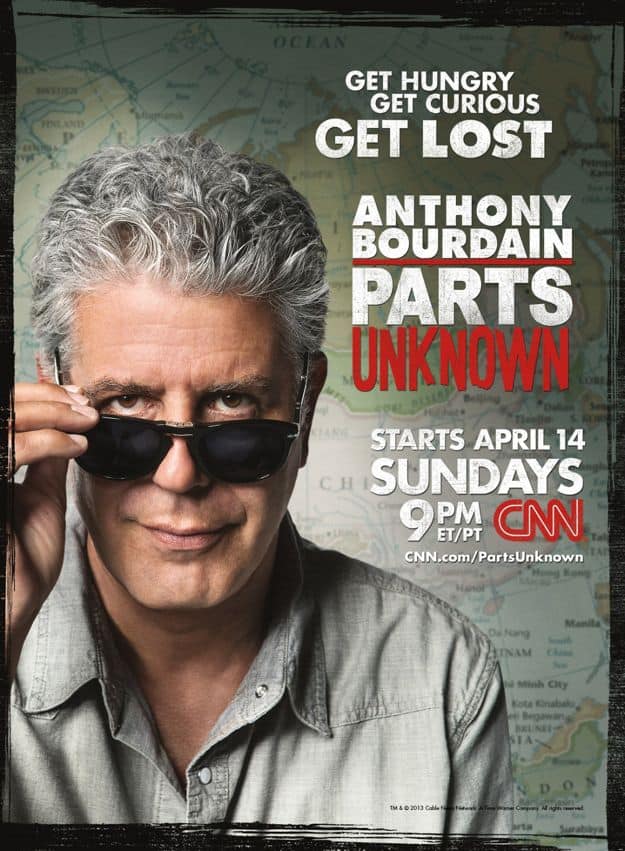 The one-hour weekend lifestyle series follows Bourdain as he travels the across the globe to uncover little-known areas of the world and celebrate diverse cultures by exploring food and dining rituals. Known for his curiosity, candor, and acerbic wit, Bourdain takes viewers off the beaten path of tourist destinations – including some war-torn parts of the world – and meets with a variety of local citizens to offer a window into their lifestyles, and occasionally communes with an internationally lauded chef on his journeys.

The premiere episode of the Anthony Bourdain Parts Unknown offers an inside look at Myanmar. In his maiden voyage to the country formerly known as Burma, Bourdain and his crew discover the fabled beauty and local cuisines of a country that had been, up until recently, off-limits to outsiders.  Future episodes include tours of Libya, Colombia, the Quebecois side of Canada, Koreatown in Los Angeles, Tangier, Peru and the Congo.

Viewers can find updates, behind-the-scenes photos, and exclusive content from Anthony Bourdain Parts Unknown by following the show’s Twitter account @partsunknownCNN, and accessing the CNN Parts Unknown Facebook page. During each show, viewers are invited to go to the live blog at CNN.com/partsunknown and join in the conversation using the #PartsUnknown hashtag on Twitter.