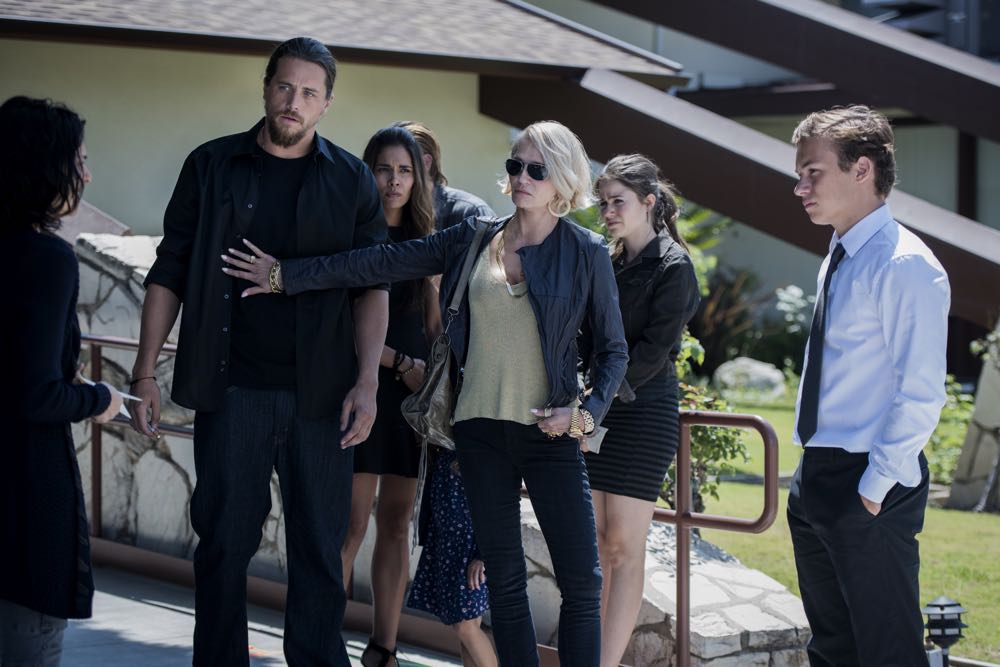 TNT’s new drama ANIMAL KINGDOM, based on the little-seen 2010 film of the same name, is about a crime family. Like any show about a crime family, there’s the strong leader, in this case a matriarch, several brothers of various levels of competency, the relation that has spent time behind bars, and the fresh-faced kid who viewers and characters alike will wonder how far in they can be drawn before they start to seem like everyone else. And these people will get into new scrapes together that constantly put them in danger and mess with the clan dynamics, while more or less maintaining status quo.

The matriarch in this series is Janine “Smurf” Cody (the fantastic Ellen Barkin, The New Normal). Janine maintains a house where her grown sons are welcome to hang out and party, which seems a little strange, considering how much nudity ends up being involved. Janine has four children, twins Pope (Shawn Hatosy, Southland) and Julia, reckless Craig (Ben Robson, Vikings), and affection-seeking Deran (Jake Weary, It Follows). Perhaps not finding any of her children competent enough to take over the business, she also adopted Baz (Scott Speedman, Felicity, Underworld) when he was twelve, and he is now the de-facto leader of the children.

The story really begins, though, when Julia, who has been estranged from the Codys for a decade, dies of an overdose. Janine immediately takes in Julia’s seventeen year-old, J (Finn Cole, Peaky Blinders), which upsets at least a couple of her sons, unsure if they can trust J around their illicit activities. Add to this, Pope shortly thereafter returns home after three years spent behind bars, and the finely-tuned system Janine has becomes unbalanced a bit.

The main drives revolve around J and Pope, which makes sense, considering they are the new elements. J is a very familiar protagonist, the outsider thrust into the strange world, but keeps his cards close enough to his chest that viewers will wonder whether or not he approves of what his family is doing. Pope is even less predictable, seeming to have some serious mental imbalance. As such, there is probably enough steam in these two threads to push the first season through easily enough.

Perhaps to add some much-needed estrogen to the proceedings, ANIMAL KINGDOM has two other female characters besides Janine: Baz’s baby mama, Catherine (Daniella Alonso, Revolution), and J’s girlfriend, Nicky (Molly Gordon, I Am Sam). Sadly, they aren’t used much; at least not yet. Catherine does have some friction with Janine, but that is barely touched upon in the pilot. Nicky seems to exist solely as a tool the Codys can use against J.

The plot in the first episode is secondary to getting to know the characters. A lot of time is spent dwelling on their various relationships and existing life, presumably to establish a baseline before things change too much and to get the audience used to the players involved. There is a bit of action, but no real threat or danger in the initial hour. I assume that will appear in the coming weeks.

I like ANIMAL KINGDOM, but I don’t love it. The concept is both familiar and decently executed, with a fine ensemble cast who can handle what’s required of them. My hesitation is that it might not show us anything we haven’t seen before, and the characters are a lot less complex than those on the higher-tier cable networks such as FX, AMC, and HBO. I think ANIMAL KINGDOM will definitely be enjoyable, but I do not see it being a serious contender for major awards or to be a “must-see” show.