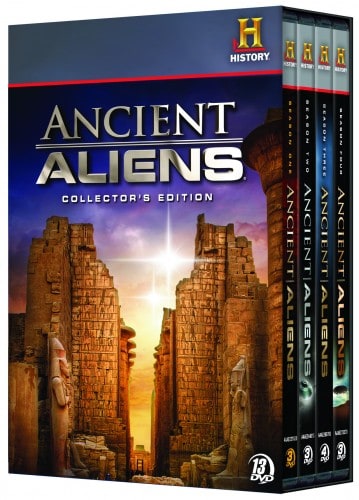 Seat42f and History have teamed up to give TWO lucky winners a copy of  ANCIENT ALIENS: COLLECTOR’S EDITION on DVD. For a chance to win leave a comment below telling us why you want to add ANCIENT ALIENS: COLLECTOR’S EDITION to your DVD collection. Only one entry per person. Contest ends December 21st. Winners will be notified on December 22nd via email so make sure to use a valid email address when you post your comment.

Did intelligent life forms visit Earth thousands of years ago and bring technologies that affected the course of human history? How do we make sense of ancient Indian texts describing “flying machines of the gods”?  Are those really “landing strips” in Peru? Do aliens visit us now?

ANCIENT ALIENS: COLLECTOR’S EDITION brings together a thorough exploration of the theories first proposed by Erich von Daniken in his 1968 book, “Chariots of the Gods”. Produced with the cooperation of the author himself, HISTORY® launched all-new expeditions to seek out and evaluate evidence of ancient alien contact.

Exploring phenomena that defy explanation, the series provides historical context to the questions and speculations surrounding ancient astronaut theory, as well as firsthand accounts and groundbreaking evidence supporting these controversial opinions. From the age of dinosaurs to the mysteries of ancient Egypt, and from the possibility of time travel to present-day sightings and cover-ups, each disc provides the information you need to make up your own mind. ANCIENT ALIENS examines 25 thousand years of the most credible alien evidence here on Earth.