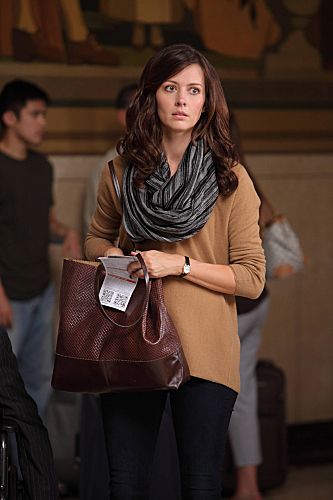 With the Machine gone missing and cybervillain Root on the loose at the end of season two, it’s becoming increasingly difficult to get decent intel on Person of Interest, which returns for a third season September 24 on a new day and time: Tuesdays at 10/9c on CBS. Fortunately, fans of the hit surveillance drama from Warner Bros. Television and J.J. Abrams’ Bad Robot Productions were given the inside track by executive producers Jonathan Nolan and Greg Plageman today at the show’s packed Comic-Con panel.

The minds behind the Machine (Nolan & Plageman) announced that fan-favorite recurring guest star Amy Acker has been promoted to series regular for the upcoming third season, starring as Root, the Machiavellian cyber-hacker.

First introduced in season one as a foil for Finch and last seen in a mental institution, the conflicted cyber-terrorist Root will stop at nothing to find the Machine and set it free.

Acker previously appeared in J.J. Abrams’ Alias and Joss Whedon’s Angel, and she stars in Whedon’s acclaimed feature film Much Ado About Nothing.