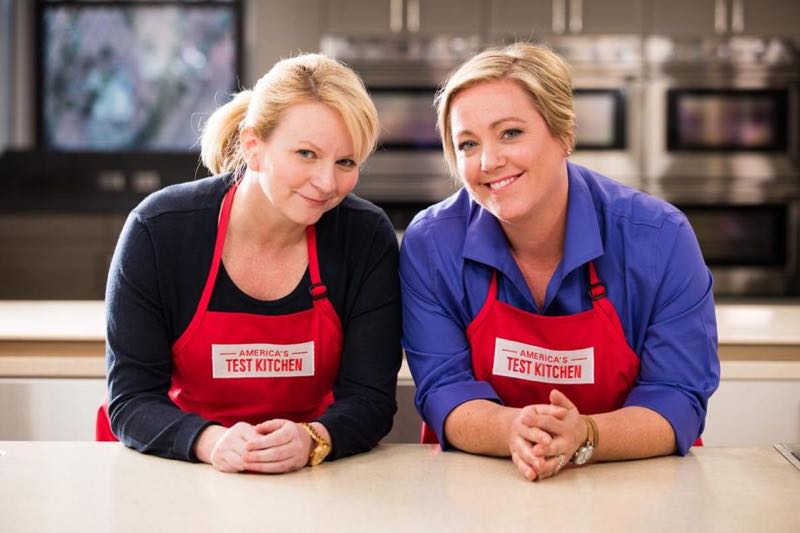 Davison, the executive food editor for the company’s successful cookbook division, has worked at America’s Test Kitchen since 1999. She was originally hired as a test cook to develop recipes and write articles for Cook’s Illustrated magazine. Prior to America’s Test Kitchen, Davison worked at several restaurants, catering companies, and wineries in Albany, N.Y.; The Berkshires, Mass.; San Francisco and Napa Valley, Calif. Julia met her husband, Ian, in the test kitchen 16 years ago when he was hired to help out with the filming of the second season.

Lancaster, the executive food editor for New Media, Television, and Radio at America’s Test Kitchen, has worked at the company since 1998. Like Davison, Lancaster started as a test cook for Cook’s Illustrated, developing recipes and writing articles. Lancaster is the lead instructor for the company’s successful online cooking school. Prior to America’s Test Kitchen, Lancaster worked in restaurants in the South and Northeast with a strong focus on pastry. In her spare time, Lancaster and her husband brew small-batch craft beers in the garage of their Boston-area home.

“We’re excited to elevate Julia and Bridget into their new roles as co-hosts of America’s Test Kitchen. Bridget and Julia have been teaching our television audience how to cook for 16 years. Their new role leverages their incredibly rich knowledge about home cooking and we hope deepens our audience’s attachment to these respected personalities,” said David Nussbaum, CEO of America’s Test Kitchen. “While the show will retain its successful format, the new co-hosts will bring new energy and excitement.”

“Bridget and Julia have been cooking our signature, foolproof recipes in hundreds of episodes,” said Mary Mullaney, Executive Producer of Television and Video. “They’ve earned the trust of the home cooks that love our show and it makes sense to have them lead our ensemble cast into season 17.”

Fan favorites and test-kitchen experts Davison and Lancaster will bring new life to the cherished show while still keeping the esteemed format intact.

“It’s an honor to be selected for this role on America’s Test Kitchen,” said Lancaster. “As an original cast member, it’s amazing to see how much the show and our fans have grown. I’m thrilled to grow along with them and can’t wait to work with my good friend Julia.”

Chris Kimball will continue to appear as host of America’s Test Kitchen for the 2016 season that is currently airing on public television stations across the country.

America’s Test Kitchen began with a single magazine title, Cook’s Illustrated, which debuted in 1992. The America’s Test Kitchentelevision show was launched in 2001, after which the company added Cook’s Country magazine, a second television program, an online cooking school, three websites that offer recipes and online video, and a robust book program that publishes a dozen new titles a year, which regularly land on bestseller lists. Learn more at https://www.americastestkitchen.com/.