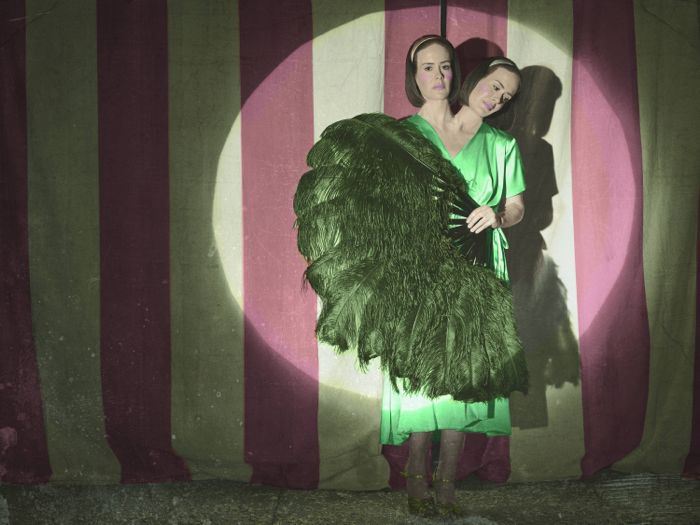 AMERICAN HORROR STORY is back for a fourth season, subtitled FREAK SHOW, with “Monsters Among Us,” airing this week. As in past seasons, the characters and story are new, but many of the performers will look familiar to fans of the anthology series, as actors have returned and taken on new roles. This year’s entry is set at a carnival freak show in Jupiter, Florida, 1952, and thus far, those who make up the troupe seem a whole lot less freaky than the local people surrounding them.

This revelation comes as quite a surprise. When FREAK SHOW was announced, I assumed much of the terror would be delivered at the hands of those who look different. After all, such circuses have always put off a bit of a creepy vibe, and having characters that appear monstrous actually act scary, too, makes sense. But the writers make a different choice here, quickly showing the troupe as a family and those who would threaten them, be they law enforcement, or a bitchy candy striper (Grace Gummer, The Newsroom), or an entitled rich brat (Finn Wittrock, The Normal Heart) and his doting mother (Frances Conroy), as the people to look out for. Nice idea.

The group is led by Elsa Mars (Jessica Lange), the benefactor, boss, and recruiter. She is assisted by bearded lady Ethel Darling (Kathy Bates) and her son, Jimmy (Evan Peters), as well as a bunch of other members of the clan. These people are outcasts from society and Elsa brings them together not only for their own protection, but also to provide a place for them to shine. She is quick to protect her charges, and while she is a bit controlling, she understands and appreciates those who fall in with her, which is how she can inspire loyalty among her followers. After all, she is one of them, of course.

We don’t yet have the whole lay of the land; four main players are completely MIA in the AMERICAN HORROR STORY: FREAK SHOW premiere. This is par for the series, and as the story unfolds, others will naturally be added in. AHS takes its time in crafting a plot, unconcerned with forcing characters into a crowded field or at an unnatural time just because the actor’s name is in the opening credits, as many other shows do.

Among this troupe, there is one person that somewhat stands out because she’s been seen before, and that’s Pepper (Naomi Grossman). Pepper lived in the Asylum of season two, and she is the first character to appear in more than one season of AMERICAN HORROR STORY. Since Asylum is set more than a decade later than FREAK SHOW, we know where she ends up, but not yet how she gets there. It’s an interesting precedent that I hope will be repeated, and fits very well into the new season.

There is one freak that is scary in “Monsters Among Us.” We’re introduced to Twisty the Clown (John Carroll Lynch, Body of Proof), a homicidal clown with a very scary mask (or is it a mask?). Twisty is not one to mess with, and he doesn’t even require a reason to strike. But thankfully he is not part of the main contingent, so hopefully, while there will be some interaction, we’re not asked to care about him as we do the others.

For the most part, I really like “Monsters Among Us,” a cool story that intrigues and entices, but there are a couple of strange choices made. For instance, the camera teases around conjoined twins Bette and Dot Tattler (Sarah Paulson), waiting awhile to reveal them to be two heads on one body. This makes sense to be repeated later in the episode for budgetary reasons, but in the initial introduction, there’s not much reason to build suspense and mystery given that pictures of the character have been widely circulated prior to this. Also, Elsa sings “Life on Mars,” a song written by David Bowie in 1971. It’s a neat performance, but one that definitely feels out-of-time for the early 1950s.

I’m curious about the planetary themes in AMERICAN HORROR STORY: FREAK SHOW. As mentioned, Elsa’s last name is Mars and she sings “Life on Mars,” plus the show is set in Jupiter, Florida. These things cannot be coincidence. Are they meant to evoke otherworldly images, aliens come to Earth, as Asylum showed? Or are they referencing gods, better than men, sitting above us in judgment? Either way could be interesting.

While I was trepidatious about FREAK SHOW, given the content, I am happy to report that the first episode is quite good, up to the standards of the franchise. Check it out when it airs Wednesdays at 10 p.m. ET on FX beginning this week.