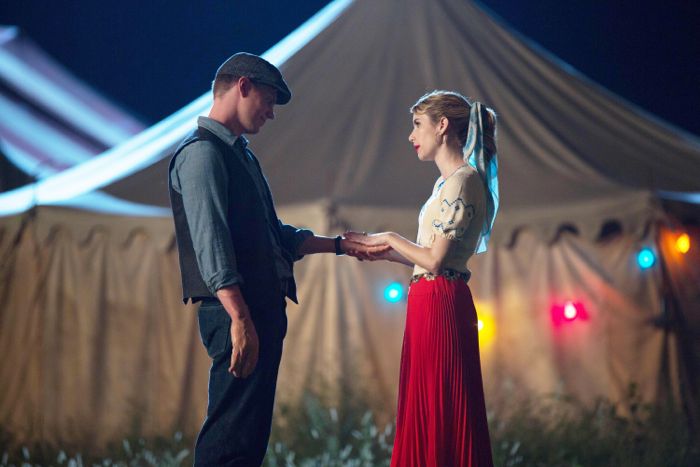 As a fan of American Horror Story, I’ve seen quite a few troubling scenes on this series. Scenes that I want to forget as soon as they happened. But what I’ve seen up to this point hasn’t compared to what I saw in tonight’s episode of Freak Show.

The episode started out innocently enough – well, as innocently as any episode of this series. Stanley and Maggie were making their plans to ensure that all of Elsa’s acts were going to have some serious accidents. Stanley had even gone so far as to start pricing out tanks for their “beautiful corpses,” as he put it. After last week’s episode, I would have thought that Maggie would decide to back out of the plan once it involved murder. But she only asked for a bigger cut of the money.

Stanley played to Elsa’s pride by offering her a TV show, which didn’t hold any appeal for her until her act tanked. Stanley also offered the twins their own show, but that was just a ploy to get them alone so they could eat his poisoned cupcakes and become his first set of victims. Luckily they survived his attempt, but the damage was still done. Elsa saw how much interest he had in them and quickly drove them away to become a present for Dandy.

Before I talk about the scene that I don’t want to remember and yet won’t stop replaying over and over in my mind, I must talk about how we got there.

We’ve seen that Desiree and Dell have been having troubles in the bedroom. I wondered if Dell’s strength act was stripping him of testosterone, but the explanation was simpler than that. It also explained why he was so enamored with his wife with three breasts and one ding-a-ling. Dell was gay and in love with another man.

A beautiful man named Andy, played by an equally beautiful man named Matt Bomer. When I heard that Bomer was doing a guest spot on the show, I thought it might be as a murder victim. I mean, that’s what this show is all about, right? I don’t know if it was because the part was played by Bomer, but I found myself instantly falling for Andy and I hoped with everything I had that he wouldn’t end up as a victim.

Sadly, I was wrong. But Andy wasn’t just a victim. He was Dandy’s first attempt at the perfect murder and it went awfully, disturbingly awry. It’s weird to say it, but I can’t really blame Dandy. I certainly thought Andy was dead the first time, and the second time. Why, oh why did he have to keep on coming back, even after Dandy had hacked off one of his arms?

And now I shall never get his voice out of my head, begging Dandy to kill him. Murderous clowns are child’s play compared to what that voice will do in my nightmares. Thanks, AHS.

Elsa referring to TV as the “death of art and civilization.” I wanted to deny it, but then I remembered the Kardashians.

Billy rehearsing his act. Too cute that he still gets stage fright.

Poor Elsa finding out that her act isn’t as popular with regular folks as it is with her friends.

Desiree telling her life’s story while in the stirrups. That felt awkward.

Gloria explaining away Dandy’s insanity as inbreeding, which was a symptom of being rich. Her volunteering to help him feed his “appetite” creeped me out to no end.

The use of David Bowie’s “Fame.” This season is killing it with the musical choices.

The entire scene of Dandy working out and practicing acting in his tighty whities.

And now Bryan Ferry’s “Slave to Love.” Another fantastic choice.

Dell admitting that was in love with Andy.

Dell: “There’s nothing worse than the hurt of loving someone you can’t have.”

Is it wrong that I really wanted to see a love scene between Dandy and Andy? Even their names are perfect.

I knew it was coming, but it was still awful to watch. especially when Andy begged to be killed. Worst scene in this show ever.

Elsa delivering the twins to Dandy? That is so not good.

What did you think of this episode of American Horror Story: Freak Show? What was the most horrifying scene for you?