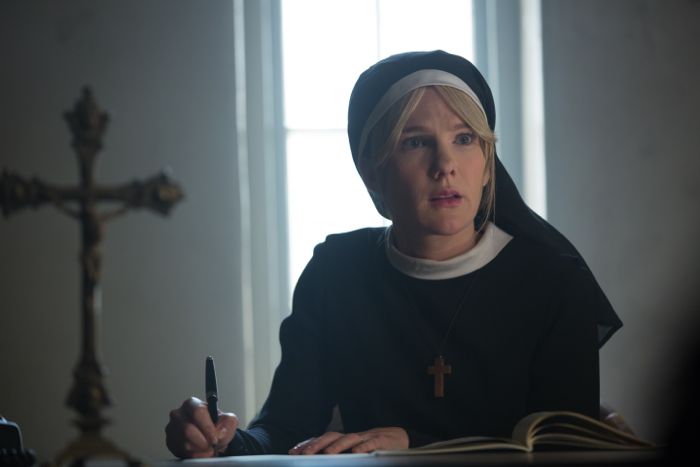 There were equal amounts of horror and heartbreak in this episode, which had me in tears more than I would have expected from this series.

With the death of Salty, Pepper went into a depression that no one could console. All this time, I had assumed that Salty was Pepper’s brother, but it turned out they were actually husband and wife.

All of the freaks’ stories have been sad to learn, but I think Pepper’s was the saddest of them all. We knew from her time in Asylum that Pepper’s brother-in-law had killed her sister’s baby and blamed it on Pepper, but I didn’t realize how much more there was to it than that.

I think the most surprising thing about Pepper’s story was learning just how much Elsa cared for her and the other freaks in her care. Pepper was her first and Elsa truly seemed to love her like a mother would a child. Elsa gave Pepper everything she needed to be happy and I think she really did think she was doing the right thing by sending Pepper back to her sister after Salty’s death.

How could Elsa know that Rita and her husband were as evil as any of the other murderous characters on this show? Check that, I think those two were in fact worse than anything or anyone we’ve seen. Killing their own child was malicious and sick and I hope there will be a scene coming up at some point where we see them get their due.

It was good to see Sister Eunice again and though she mistook Pepper’s pain for remorse, at least it gave Pepper the chance at a different life. Now we know how Pepper became to be the intelligent woman we saw in Asylum.

I was happy to see that Maggie had finally decided she’d had enough of Stanley and his evil plan. Telling Desiree was a great idea and I’m sure they’re going to find a way to get rid of him once and for all. Once the other freaks find out what Stanley has done, I don’t think he’ll be long for this earth and I will be very curious to see what they do to him. Of course even with Stanley gone, there are bound to be more threats to the performers. This is American Horror Story, after all.

Desiree completely ignoring Pepper’s temper tantrum. I think that was probably the best thing she could have done just then.

Elsa knocking down one of the other chorus girls.

Elsa referring to Pepper as her “first monster.”

Finding out the maharajah referred to Ma Petite as his “favorite pet.” That was just awful.

Finding out that Elsa traded Ma Petite for three cases of Dr. Pepper.

The wedding of Salty and Pepper. Too sweet.

Desiree’s version of “showing off the new dance craze.”

Desiree: “I wasn’t born on a farm, but I do know bullshit when I smell it.”
Maggie: “Go to hell, triple tits.”

Elsa screaming at Rita to stand up to her husband for Pepper’s sake.

All of Elsa’s reassurances before she left Pepper.

Poor Desiree finding out what really happened to Ma Petite and Salty.

Jimmy’s hands showing up in that jar. Whoa.

Sister Eunice telling Pepper she was going to bring the best out of her.

Finding out that Elsa actually made it onto TV.

What did you think of this episode of American Horror Story Freak Show? Were you surprised to learn the whole truth of Pepper’s story?