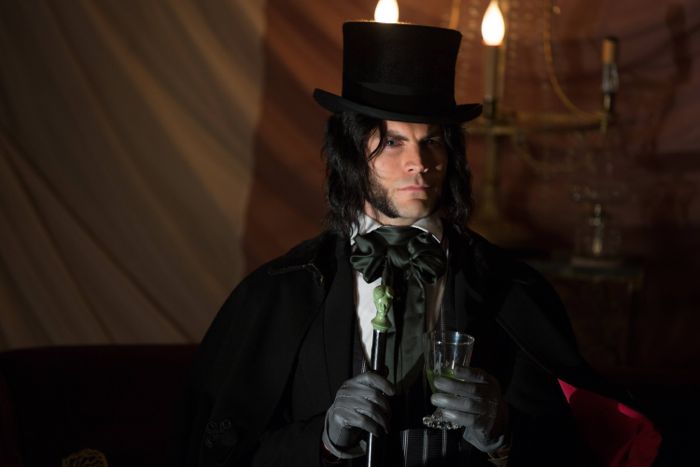 Mordrake continued his search as Halloween wore on in this episode. It was a very long night for everyone, perhaps none more than Twisty.

I had a feeling from nearly the moment we met Twisty that there was once a kind person behind that terrifying mask. I could see that he thought he was entertaining the children he took and didn’t understand why they didn’t laugh at his little act. His was indeed a sad story, but as there was no hope of redemption, I think it was almost a kindness that Mordrake took him.

Of course, Mordrake taking Twisty away left the door open for another frightening murderer and Dandy was very happy to step into that role. Unlike Twisty, I hold no sympathy for him so I’m sure I will enjoy it when someone takes him down. Until then though, I’m terrified to see what Dandy’s going to do now that he’s found his power. When he was just a spoiled brat, he was kind of amusing, but the moment he made his first kill he stopped being funny.

Because of Mordrake’s search for the perfect freak to add to his family, we got to hear the stories from a few of the performers. I assumed that Elsa had lost her legs in an accident of some sort. The true story was so much worse. It’s heartbreaking to think that she finally got her wish to be a star, but lost her career because of what happened.

Not that I consider Elsa completely helpless. She’s already shown the twins that she’s not to be trifled with, but I think she’s going to be easily won over by Spencer’s fake charm. The moment he mentioned Hollywood he had her eating out of his hand. I wonder how she’ll feel when he takes the twins away.

It’s funny to say, but there was actually one heartwarming moment in this episode full of horror. I was very happy to see the people from the town come out to thank Jimmy and then stay to get to know the rest of the performers. I don’t know how long it will last, but it was nice to see them accepted and not ridiculed.

Overall, I found this to be another great episode. Perhaps not the scariest of the season, but it had a lot of other good stuff in it so that’s okay.

Finding it amusing that Mordrake kept asking people to amuse him. What? So they could die? I would’ve been as boring as possible.

Paul breaking down when talking about how different his life would’ve been if he had been born on a normal body.

Elsa screaming “I’m not one of them!” even as they took off her legs.

Cage girl trying to make another run for it. I like this chick.

Jimmy going off to try and help. Good for him. For a second there I thought they were just going to leave her.

Elsa as Mistress Elsa. Wow. That I didn’t expect.

Elsa: “You trade away your dignity, trick by trick.”

Elsa begging Mordrake to take her with him.

The Dandy and Twisty Show. There are no words for how bizarre that was.

Jimmy punching out Dandy and Twisty clapping. Loved it. Too bad it got Jimmy a spot in the cage.

Dandy screaming like a spoiled brat that he hadn’t finished his show yet.

Madison leading Dandy away while the others ran. Who knew she was capable of that?

Dandy: “You ruined my Halloween!!”

Twisty’s face becoming whole as he was taken away by the rest of the freaks.

All the people coming to thank Jimmy and meet the rest of the performers. Aw.

Elsa’s whole demeanor changing when she found out Spencer was a talent scout.

Dandy finding out what he could do now that he has a new mask.

What did you think of this episode of American Horror Story: Freak Show? Did you expect Twisty’s story to be so sad?