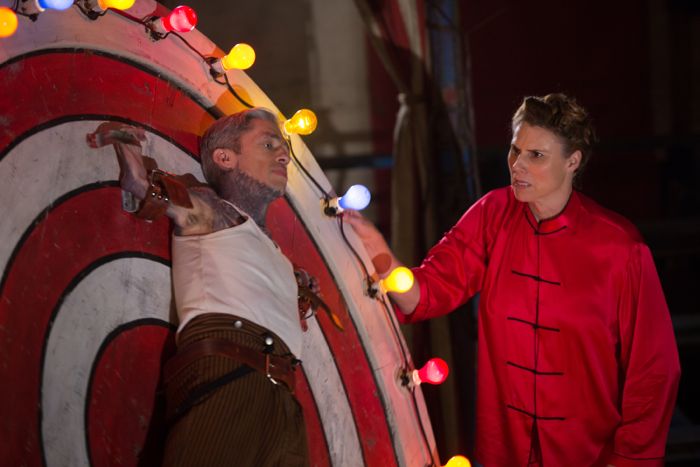 I know this statement is going to make me a freak, but I don’t care: I’m kind of falling for Dandy.

Let me clarify that. I fall for Dandy every time he’s the sweet and vulnerable version of himself, not the insane murderous one. He was so nice to Dot and Bette in this episode that I almost, for a little while, forgot the horror that he subjected me to in last week’s episode.

I honestly thought we would find Dot and Bette tied up in a cage or maybe out in the clown’s old bus, but they were actually treated very well. As well as prisoners being forced to stay somewhere that their former boss had dropped them off under false pretenses, anyway.

I’m fascinated by Dot’s fantasies about getting a separation surgery and killing of Bette. It’s shocking to see how little she cares for her sister and how she just openly wishes for her to be dead. I wonder why Bette doesn’t act more upset by her sister’s admissions, but maybe she’s used to it by now. Bette probably assumes that it will never happen because the technology isn’t there and they don’t have the money anyway. I think she might be underestimating just how much Dot wants to be on her own.

Now that Dandy knows what’s in Dot’s diary, it might be Bette who gets the chance to live on her own. I have to wonder if Dandy might look for a way to separate the twins by killing Dot and keeping Bette for himself. It’s crazy, but anything is possible on this show.

The other character I really loved in this episode was Paul. I like how the series is slowly peeling away the layers of the characters and we learned a lot about Paul this time around. He’s sweet and romantic, but also incredibly intelligent and brave. He didn’t hesitate to let Elsa know he suspected her and I thought for sure he was done for when she pulled her little knife trick. I was afraid he would be the next one to die as soon as I started to like him. That seems to be my luck with this series. But luckily he’s still alive for now.

I was also relieved that Maggie couldn’t go through with killing Ma Petite. I worry that she’s gotten herself into a load of trouble with Stanley though. I feel like she should just tell Jimmy everything, because I know Jimmy could get the rest of the performers together and take down Stanley with no trouble at all. They would be burying him in the swamp behind the tents in no time. But logically I know that if Jimmy found out what Maggie has done, she could end up buried right by Stanley. She’s definitely in a tough place.

Bette falling in love with Dandy. Well, he is certainly charming when he wants to be.

Admiring Dot for having a better handle on reality.

Dot fantasizing about having the surgery. Evil little thing, isn’t she?

Dandy trying to claim that Paul tried to pick his pockets. That was low.

Paul: “I’m going to take my business to Woolworths. They’ve got ice cream.”

Dot refusing to tell Dandy a secret. Well, that was one way for Bette to see he wasn’t as sweet as he was pretending to be.

Stanley thinking it would make Maggie feel better to tell her that they weren’t going to cut off Jimmy’s hands when he was alive.

Elsa: “I little culture for the TV viewers. God knows they need it.”

Elsa actually smiling when Paul got hit, then pretending to be upset. I’m really starting to dislike that woman.

Nearly fainting in relief when Maggie showed up with Ma Petite.

Dandy: “I was never destined to feel love.”

Dandy: “I know why I was put here, Mother. My purpose is to bring death.” – WHOA.

What did you think of this episode of American Horror Story: Freak Show? Do you prefer crazy Dandy or sweet Dandy?