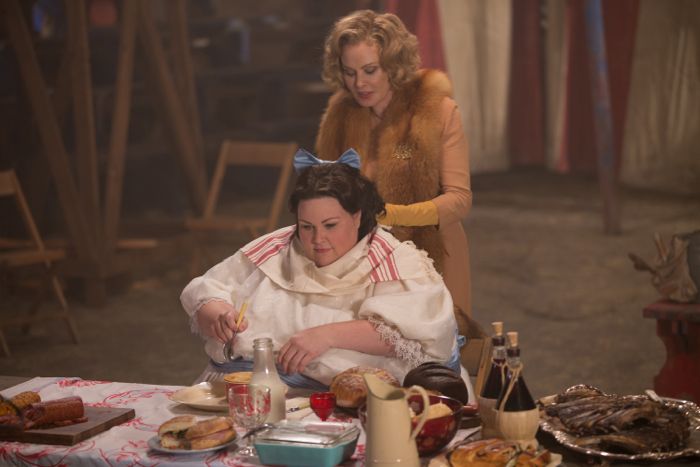 When I saw the title of this episode, I had no idea it would be taken so literally.

We learned a bit more about Dandy this time, including details about his parents being second cousins and his father also being a disgusting creep. Is inbreeding enough to blame his murderous ways? Somehow I really don’t think so.

Before Dandy’s story was fleshed out, the episode began with the performers searching for poor Ma Petite. They discovered her torn dress and assumed she had been attacked by an animal. I kept thinking that surely someone would discover that her body is on display, but then I have to remind myself that there was no internet then and it’s not exactly like someone would be posting pictures on Tumblr.

It was interesting that Ma Petite’s death sent Ethel over the edge to the point where she was ready to kill Elsa. She wasn’t exactly wrong about the ring leader being jealous and capable of that type of treachery. But Elsa didn’t actually do anything to Ma Petite so Ethel’s anger was still misdirected. It made it hard to decide whose side I was on during their discussion. In the end, Elsa won and got a lot of help from Stanley to hide the truth. Of course he wants to stay in Elsa’s good graces, so she can keep him supplied with plenty of freaks for his little side business.

Jimmy said something in the beginning of the episode that stayed with me as one heinous act begot another. He said that none of them were innocent now and that is truly becoming the case. In the beginning, we were led to believe that Twisty the Clown was the sickest freak of them all. Now there are plenty of others vying for that title. Yes, Dandy is a terrible person, but are his acts really any worse than the three women who took Penny’s father and tortured him? Yes, Penny’s father hurt her, but would another wrong have made things right?

In the end, Penny let her father live and one can only hope that at least she might be heading in the right direction. I fear though that Jimmy was right – none of them are innocent any longer and the blood baths are only going to continue.

Elsa: “God put his very own light into that little angel.”

Gasping then laughing when Ethel shot Elsa in the leg. Ethel’s face. I can’t even.

Wow. That Elsa is one heck of a knife thrower.

Gloria coming up with the most complicated story about a squash, ever.

Jimmy’s eulogy for his mother.

Dandy’s calm explanation of the horrific sights in the ink spots.

Dandy asking the best way to take someone’s power – eating their flesh or bathe in their blood.

The awful things Dandy said to his mother while decorating a Christmas tree. That truly messed with my head.

Elsa: “What if I told you there is a place where every pound of that glorious jiggle would be cheered and celebrated?”

Thinking for one second that Penny was going to save her father.

Maggie trying to talk sense into the women.

Gloria: “No, please, Dandy. I can’t go on if you kill yourself.”

Jimmy seeking comfort in Barbara’s ample bosom. So very awkward and yet heartbreaking.

Dandy bathing in his mother’s blood. Was he trying to absorb her power or perhaps be closer to her?

What did you think of this episode of American Horror Story: Freak Show? What moment shocked you the most?