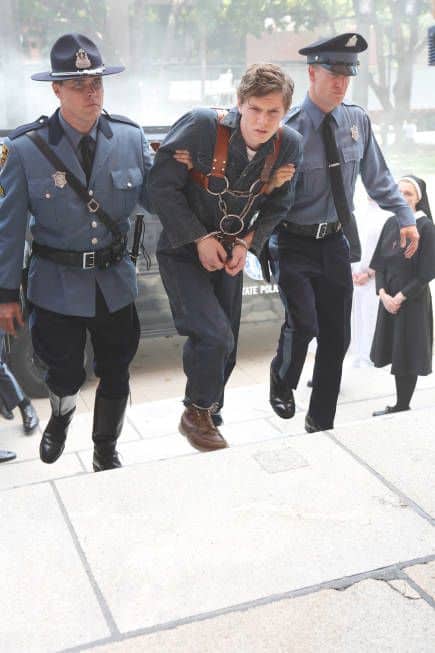 Some who have heard the premise of AMERICAN HORROR STORY ASYLUM might be surprised when the story begins in present day. Leo (Maroon 5’s Adam Levine) and Teresa (Jenna Dewan-Tatum, The Playboy Club) are a fear-addicted couple on their honey moon, intent on having sex in the scariest of places. Their travels bring them to Briarcliff, a former mental hospital. While there, something attacks Leo, making their good times turn to bad.

This glimpse into the present day, while one hell of an opening scene, is not just that. Some scary movies may have a stand-alone tease before getting to the main story, but the fact that Leo and Teresa are visited later in the episode, “Welcome to Briarcliff,” points to a different agenda. Like season one, time is fluid, and what has happened influences what will happen and vice versa. The two are not main characters, but it is very likely we will see them again.

Thus, AMERICAN HORROR STORY ASLYUM establishes right off the bat that it is going to be as good and complex as the first season. The actors are fantastic, the setting is rich and detailed (and even more creepy), and the story is just as interwoven with itself as ever. Little tidbits are teased out, with many things remaining a mystery. The characters are written in such a way that feel authentic, and yet, remain unpredictable. Viewers cannot possibly see where this is going from one episode alone, but the first installment is so tantalizing, they should want to keep coming back.

The main plot, as advertised, happens in 1964, when Briarcliff is still a functioning facility. The institution is run by Monsignor Timothy O’Hara (Joseph Fiennes, Camelot, FlashForward). His favorite nun, Sister Jude (Jessica Lange, American Horror Story), is quick to judge and likes to whip people, considering sin a horrible thing, but not hypocritically above engaging in it herself. She has plans for Briarcliff, and O’Hara has plans for her. She just wishes that they included sex.

Jude is definitely the most interesting, right out of the gate. Played with a strange accent that doesn’t quite define itself, she has an iron fist, and even her compassionate acts come across as trying to force what her narrow mind thinks of as god’s will, rather than to help people. She wants to cleanse the place, making it her own. It would not be surprising if she gets her way, at least for a time, but it won’t help the patients interned there any more than playing the same cheery song on loop, which she insists happen in the common room, does now.

Jude is challenged by Dr. Arden (James Cromwell, The Artist, Six Feet Under), a man of science. Or so he says. His “advanced” techniques include removing brains from still living patients, and he doesn’t use anesthetic because it messes with his tests. As cruel as Jude can be, and make no mistake about it, Jude is cruel, Arden, with whom she clashes, does not present a better option.

And then there’s poor Sister Eunice (Lily Rabe, also AHS), who is torn between Jude and Arden. A pathetic soul, she may just turn out to be a hero of the piece. At least, that’s my initial guess. Or she may remain too weak to do anything of note.

There’s also another doctor played by Zachary Quinto, the lone main character billed who does not appear in the season premiere. I wonder what role he’ll play in this dynamic?

The hospital’s entire world is threatened by a reporter named Lana (Sarah Paulson, AHS again), who wants to know what is really going on in Briarcliff. Jude tries to shut her out, but Lana is determined, which leads her into serious trouble. Unfortunately for her, Jude is not at all above resorting to blackmail to protect her work, and Lana, being a homosexual in 1964, is ripe for the picking.

AMERICAN HORROR STORY ASLYUM deals with bigotry in an interesting way. Jude, the only obvious hater from the start, is, of course, a detestable character. But it’s interesting there is both a lesbian (Paulson and Clea DuVall, Carnivale) and a interracial couple in this episode, given the time period. It’s not that this sort of thing didn’t exist back then, it’s just that both are living as openly as can be expected, given the societal norms, and both are part of this story, which has only a limited view of the world. Credit Murphy and Falchuk for their continued themes of inclusion in the unlikeliest of circumstances.

The black and white pairing are Kit (Evan Peters, AHS) and Alma (Britne Oldford, Skins). When Alma is found dead, skinned alive, Kit is assumed to be the serial killer behind it, and it placed in Briarcliff. Yet, Kit thinks he was abducted by aliens that night, an occurrence backed up when Dr. Arden examines him. So it Kit real, or crazy? And is Dr. Arden’s involvement in the story imagined, or does it actually happen? My instincts tell me that Kit is not the killer, because that was Peters’ character’s secret in the first season. And having aliens actually be a part of this story doesn’t seem likely. But you never know.

It’s this blurring of reality that is bound to make AMERICAN HORROR STORY ASYLUM great. In a mental hospital, who’s to say what is real or not? It is a place stocked with crazies (including Lizzie Brochere, R.I.S. Police scientifique, and Chloe Sevigny, Big Love), and depending on the perspective of the scene, things might be seen that don’t really happen. Add to that, visual fantasies and an actual monster, and this is a very strange, terrifying place.

Let’s be honest. What viewers really want to get out of this series is a good scare in a vivid world. Like season one, maybe even more so, the latest installment delivers this in spades, and with a large, talented cast that will provide plenty of tangents to keep the plot moving at an acceptable intensity. If you liked the first season, season two should not disappoint.