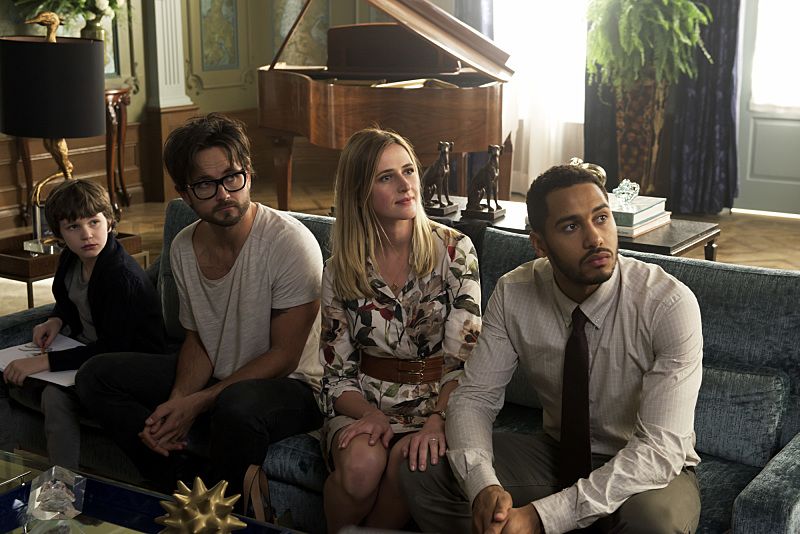 Next up in the crappy-summer-shows roster is CBS’ AMERICAN GOTHIC. A soapy murder mystery, I understand why this series was held for burn-off during the hot months because it feels a lot like several other shows that premiered earlier in the year, were soon canceled, and I’ve mostly forgotten about (like The Family). Will this show find an audience and fare better? Probably not, so I wouldn’t blame you if you stop reading now and ignore its existence.

If you’re still reading, let’s talk a little bit about AMERICAN GOTHIC, though. It has a pleasant enough cast, which makes for many suspects, each with their own dark secrets (because no one in a world like this is ever who everyone thinks they are). By making a lot of them related, it’s supposed to be more shocking when things come to light, or harder for the characters to distrust one another, but it’s not because of the very familiar tone. There is a serial killer, but don’t even bother trying to figure out who it is at this stage because there will be a million red herrings and twists.

It’s not very satisfying to watch a show like this because it doesn’t feel like there’s a plan from the start. I could be wrong, and there’s no way to know that until the end of the season, but unlike in the best mysteries, that drop important clues early on, shows like these tend to concentrate more on doing the unexpected than crafting an intricate story. They try to go for the plot that comes out of nowhere, rather than something that naturally flows or was previously hinted at. It makes theorizing with your friends just not that great since no one really has any insight into what’s going to happen. It’s an all-too-common style that we can use less of on television, and the way the pilot plays out all but confirms that’s what AMERICAN GOTHIC is.

I realize I haven’t given you a lot of specifics about why I think the show is bad, but I really don’t want to ruin anything for those who are genuinely interested. Let’s just say there are things involving a cat, a box, and a hospital room that smack as gratuitous and have helped forge the opinion above.

As I mentioned before, the cast is good. With so many quality programs on the small screen these days, it’s not a surprise that even the lesser fare can attract talent. After all, it’s often hard to tell from just a script whether the series will be great or not. AMERICAN GOTHIC does have a solid ensemble, and they sell the material pretty much as convincingly as possible.

The central figure seems to be Alison Hawthorne-Price (Juliet Rylance, The Knick), a wife and mother running for mayor of her city. As the campaign unfolds, we meet the rest of the clan, brought in to help her win. There’s matriarch Madeline (Virginia Madsen, Sideways), former drug-using brother Cam (Justin Chatwin, Shameless), Cam’s disturbed son Jack (Gabriel Bateman, Stalker), elementary school teacher sister Tessa (Megan Ketch, Jane the Virgin), Tessa’s detective husband Brady (Elliot Knight, Once Upon a Time), and long-missing brother Garrett (Antony Starr, Banshee). There’s also a father to the group, who is not in the official cast list, so presumably not a main character, and Cam’s still-addicted ex, Sophie (Stephanie Leonidas, Defiance), soon pops back up.

It is a relatively large family, but again, that’s needed so we have a lot of suspects and a dozen episodes of secrets can come out. After all, a lot of different boxes are checked with the grouping above, no one having a boring life that won’t affect the proceedings, and no two crossing orbits too much. It’s a familiar formula that probably won’t work any better than it usually does.