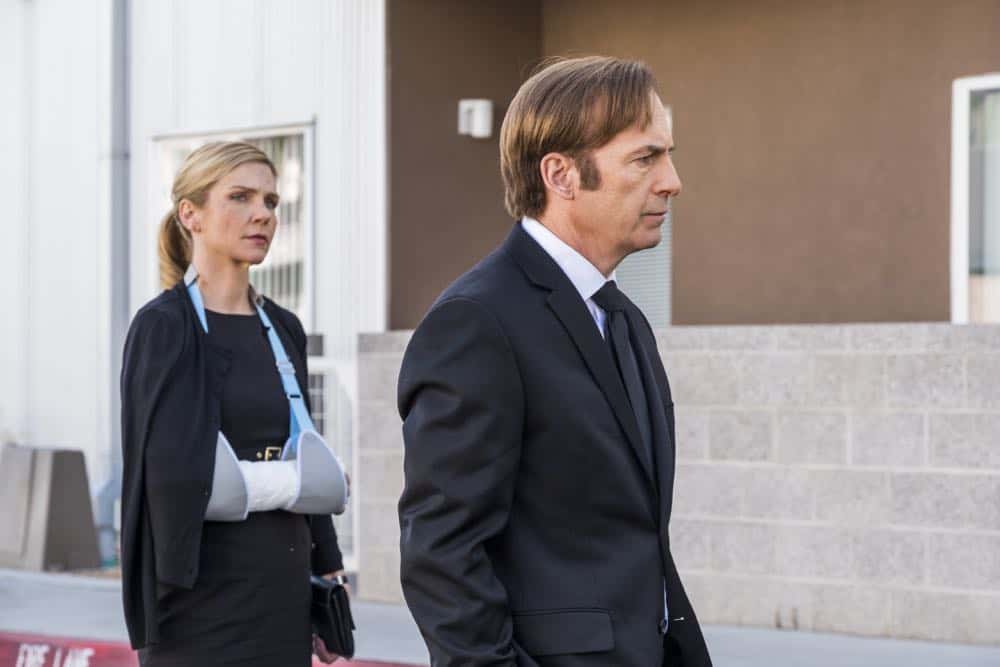 AMC and Sony Pictures Television announced today from the Television Critics’ Association (TCA) Press Tour the renewal of acclaimed Breaking Bad prequel Better Call Saul for a sixth and final 13-episode season, which will go into production later this year and air in 2021. The renewal comes just ahead of the highly-anticipated season five two-night premiere event on Sunday, February 23 at 10:00 p.m. ET/9c and Monday, February 24 at 9:00 p.m. ET/8c. In the 10-episode fifth season, Jimmy McGill’s (Bob Odenkirk) decision to practice law as “Saul Goodman” creates unexpected and profound waves of change for those in his orbit.

“From day one of Better Call Saul my dream was to tell the complete story of our complicated and compromised hero, Jimmy McGill – now AMC and Sony are making that dream come true,” said Showrunner and Executive Producer Peter Gould. “We couldn’t be more grateful to the fans and critics who are making this journey possible. Next month we start work on the sixth and final season – we’re going to do our damnedest to stick the landing.”

“Greenlighting a prequel to one of the most iconic series in television history is one of the boldest swings that AMC has ever taken. But, thanks to the creative genius of Vince Gilligan and Peter Gould, it has also been one of the most rewarding,” said Sarah Barnett, president of AMC Networks Entertainment Group and AMC Studios. “It has been an absolute joy to collaborate with the extraordinarily talented team on Better Call Saul, which – five seasons in – continues to deliver some of the best storytelling and most beautifully nuanced performances on television today. We congratulate Vince, Peter, our producers, writers and cast on a remarkable run and look forward to sharing this final chapter with fans.”

“Like Breaking Bad, Better Call Saul is brilliant storytelling at its best. Vince and Peter have created a fascinating world and compelling characters that are unlike anything else on television,” said Jeff Frost, president, Sony Pictures Television. “And the exceptional performances of this extraordinary cast have charmed and captivated audiences every season. While we are sad that this remarkable series is coming to a close, we can’t wait for Vince and Peter to divulge the sensational conclusion.”

AMC is home to some of the most popular and acclaimed programs on television. AMC was the first basic cable network to ever win the Emmy(R) Award for Outstanding Drama Series with Mad Men in 2008, which then went on to win the coveted award four years in a row, before Breaking Bad won it in 2013 and 2014. The network’s series The Walking Dead is the highest-rated series in cable history. AMC’s current original drama series are Better Call Saul, Fear the Walking Dead, The Terror, Preacher, McMafia, Lodge 49, NOS4A2, as well as the forthcoming series Dispatches from Elsewhere, Quiz, The Walking Dead: World Beyond, Soulmates, and the recently greenlit 61st Street and Kevin Can F**k Himself. AMC also explores authentic worlds and discussion with original shows like Talking Dead, AMC Visionaries and Ride with Norman Reedus. AMC is owned and operated by AMC Networks Inc. and its sister networks include IFC, SundanceTV, BBC America and WE tv. AMC is available across all platforms, including on-air, online, on demand and mobile.

Sony Pictures Television (SPT) is one of the television industry’s leading content providers, producing, distributing and carrying programming worldwide in every genre and for every platform. In addition to managing one of the industry’s largest libraries of award-winning feature films, television shows and formats, SPT is home to a thriving global content business, operating 24 wholly-owned or joint-venture production companies in 12 countries, as well as linear and digital channels around the world. SPT is a Sony Pictures Entertainment Company.