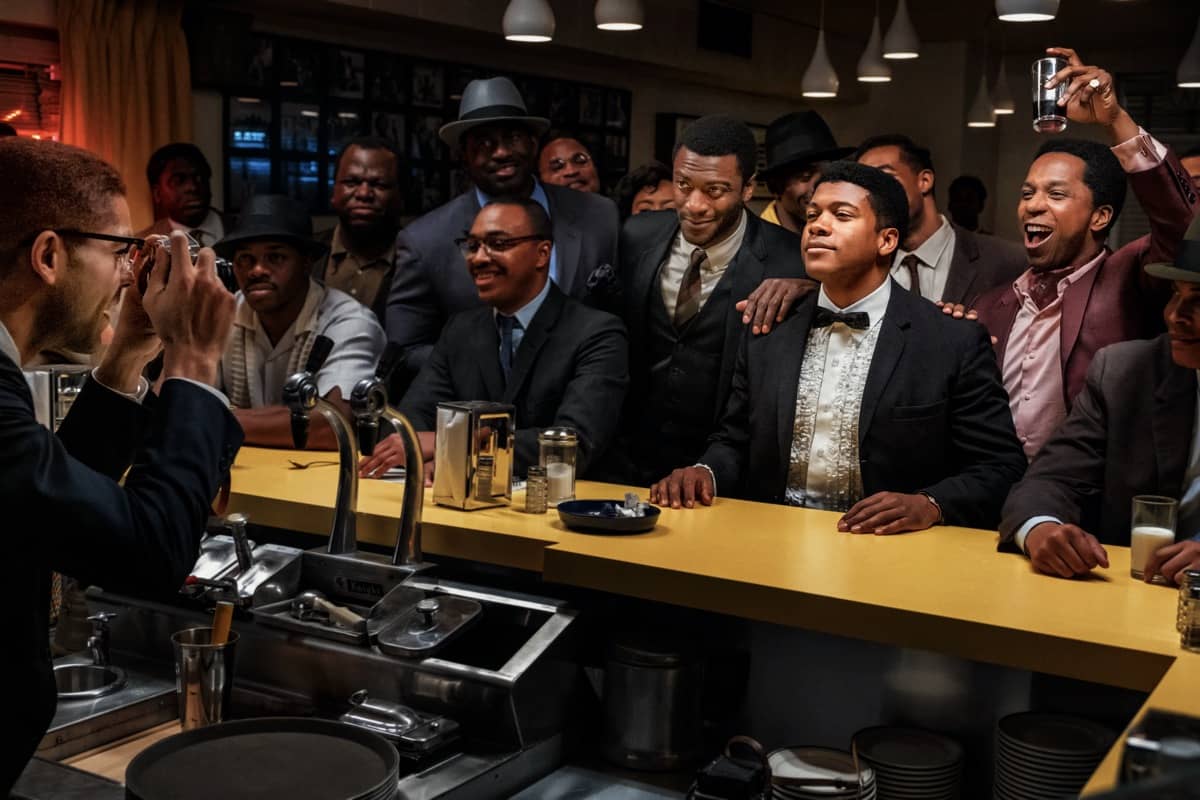 Set on the night of February 25, 1964, the story follows a young Cassius Clay (before he became Muhammad Ali) as he emerges from the Miami Beach Convention Center the new World Heavyweight Boxing Champion. Against all odds, he defeated Sonny Liston and shocked the sports world. While crowds of people swarm Miami Beach to celebrate the match, Clay – unable to stay on the island because of Jim Crow-era segregation laws – instead spends the night at the Hampton House Motel in one of Miami’s historically black neighborhoods celebrating with three of his closest friends: activist Malcolm X, singer Sam Cooke and football star Jim Brown. The next morning, the four men emerge determined to define a new world for themselves and their people.

In One Night in Miami, Powers explores what happened during these pivotal hours through the dynamic relationship between the four men and the way their friendship, paired with their shared struggles, fueled their path to becoming the civil rights icons they are today.

“One Night in Miami beautifully captures a significant moment in history when these great minds gathered and ultimately helped shape the conversation of what we know today as the civil rights movement,” said Head of Amazon Studios’ Jennifer Salke. “Regina King is a force of nature – mastering her craft in front of the camera as we’ve seen in her extensive body of work, and now taking her talent behind the camera. We’re so proud to welcome Regina and Kemp to the Amazon family.”

King said, “Amazon’s enthusiasm for One Night in Miami is both humbling and exciting. I am honored to have them as partners on my feature film directorial debut.”

ICM Partners represents Regina King and negotiated the deal on behalf of the filmmakers. King is also represented by attorney Nina Shaw and managed by John Carrabino.

About Snoot Entertainment
Keith Calder and Jess Wu Calder co-founded Snoot Entertainment in 2004 to develop, finance, and produce films across all genres and media. Snoot are currently in production on 6FT APART, a documentary about Charli XCX and her latest album “How I’m Feeling Now,” which was fully conceived, recorded, and released during the Covid-19 pandemic quarantine. Recent features include LITTLE MONSTERS and CORPORATE ANIMALS which both premiered in the “Midnight Category” at the 2019 Sundance Film Festival as well as the documentary SUPER SIZE ME 2 which premiered at the Toronto International Film Festival and was released by Samuel Goldwyn Films in 2019. Additional Snoot productions include BLINDSPOTTING, which premiered at the 2018 Sundance Film Festival; Charlie Kaufman’s Academy Award®-nominated animated film ANOMALISA; Adam Wingard’s THE GUEST, YOU’RE NEXT, and BLAIR WITCH; NAACP Image Award-nominated documentary THUNDER SOUL; and Jonathan Levine’s THE WACKNESS.

About ABKCO
ABKCO Music & Records, Inc., is one of the world’s leading independent entertainment companies. It is home to iconic music catalogues that include compositions and recordings by Sam Cooke, The Rolling Stones, Bobby Womack, Eric Burdon, The Animals, Herman’s Hermits, Marianne Faithfull, The Kinks as well as the Cameo Parkway master recordings by such artists as Chubby Checker, Bobby Rydell, Clint Eastwood, The Dovells, ? &The Mysterians, The Orlons, Dee Dee Sharp, Charlie Gracie, Bob Seger, and The Tymes. Releases on ABKCO’s SAR Records include albums by L.C. Cooke, The Soul Stirrers, Billy Preston, Johnnie Taylor, The Valentinos and others. ABKCO is active on many fronts, including the release of critically lauded soundtracks, compilations and reissues from its catalog. ABKCO’s stage production, mounted in Los Angeles, Denver, Baltimore, London and Johannesburg, of One Night in Miami received a nomination for the 2017 Olivier® Award for Best New Play. ABKCO Films releases include multiple titles by renowned cult director Alejandro Jodorowsky such as his latest, Psychomagic. Other ABKCO Film properties include The Greek Tycoon starring Anthony Quinn and Jacqueline Bisset, La Grande Bouffe, winner of the Cannes Festival’s International Critics Prize and The Concert for Bangladesh featuring Eric Clapton, George Harrison, Bob Dylan and Ringo Starr as well as The Rolling Stones Rock and Roll Circus. ABKCO won a Grammy® for the release of Sam Cooke – Legend and again for The Rolling Stones Charlie Is My Darling – 1965. ABKCO’s latest TV production is The Durrells in Corfu, based on Gerald Durrell’s book The Corfu Trilology.