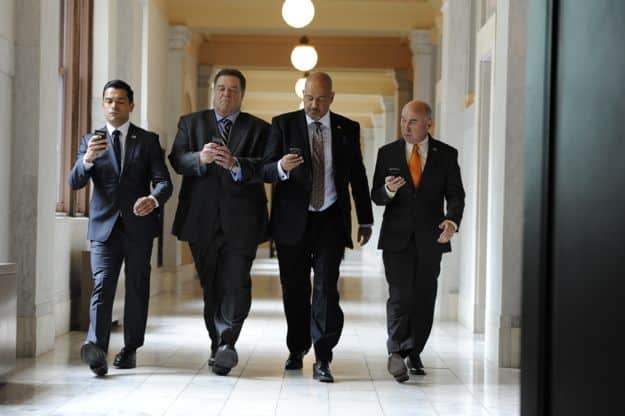 Four senators-turned-unlikely-roommates, four young entrepreneurs attempting to make it big in techland, a kid scientist and her robots, an alien artist, and a whimsical fox searching for adventure—are all getting back into character. Comedy pilots Alpha House and Betas, along with kids pilots Annebots, Creative Galaxy and Tumbleaf, have been given the greenlight to begin production on a full series of episodes that will air exclusively on Prime Instant Video later this year and in early 2014. Amazon and LOVEFiLM customers gave feedback that Amazon Studios used to decide which comedy and kids pilots should be made into Amazon’s first original series.

“We are thrilled at the enthusiastic customer response to our first original pilots,” said Roy Price, Director of Amazon Studios. “We built Amazon Studios so that customers could help decide which stories would make the very best movies and TV shows. It’s exciting to see the process in motion, doing exactly what we set out to do. The success of this first set of pilots has given us the push to try this approach with even more shows—this is just the beginning.”

“We’re thrilled to have emerged safely from this harrowing exercise in online democracy,” said Garry Trudeau, Alpha House creator. “All of us at Alpha House thank both Amazon and its wise and wonderful customer base for such a happy outcome. As the future of episodic TV packs up and moves to Seattle, we hope the audience will continue to have as much fun watching the show as we have making it.”

“After many sleepless nights scrutinizing the number of stars we were getting online, we’re excited that both Amazon and the Amazon customers have given us a vote of confidence to move forward with a full season of Betas,” said Michael London, Executive Producer of Betas. “This is only the beginning for our young social media players and we are excited to push them out in the big world to see if they sink or swim.”

“It’s really rewarding to hear that customers loved Creative Galaxy. It has been a passion project for me to bring the best arts and creativity to kids with Amazon, and I’m so excited that kids are going to be able to enjoy a full season of the show early next year,” said Angela C. Santomero, Creator of Creative Galaxy. “We need more innovative kids programming that puts a strong emphasis on creativity and education. I’m proud and honored to be collaborating with Amazon to make these shows for kids.”

“Every time you put a child in front of a screen you have the opportunity to positively influence them which is why we focused on developing pilots that purposefully combined entertainment and learning,” said Dr. Alice Wilder, Education Psychologist and Curriculum Advisor. “Parents and kids have told us they loved Annebots, Creative Galaxy and Tumbleaf and it’s going to be very exciting to see these pilots develop into shows that provide a unique and modern approach to education that will prepare children for a world that is rapidly changing.”

Alpha House, which stars John Goodman and was written by Academy Award nominee and Pulitzer-Prize winner Garry Trudeau and produced by Elliot Webb and Jonathan Alter, is a comedy about four misfit senators turned unlikely roommates (Clark Johnson, Matt Malloy and Mark Consuelos) who rent a house together in Washington DC.

Annebots revolves around Anne, a young scientist, who creates three robot helpers to assist her scientific experiments in the back of her dad’s junkyard. This science-based series from creator J.J. Johnson aims to introduce kids to science and technology in a fun, new way.

Creative Galaxy is an animated interactive art adventure series, designed to inspire kids’ creative thinking through crafts, story, music and dance. The series was created by Angela Santomero, creator of Blue’s Clues and the Emmy-nominated literacy series, Super Why!

Tumbleaf was created by Drew Hodges and Kelli Bixler of Bix Pix Entertainment, the award-winning stop motion studio. The series, aimed at preschoolers, is set in a whimsical land where a small blue fox named Fig plays each day and discovers adventure, friendship and love around every bend. Children will be enriched by narratives that promote play through exploration and scientific thinking.