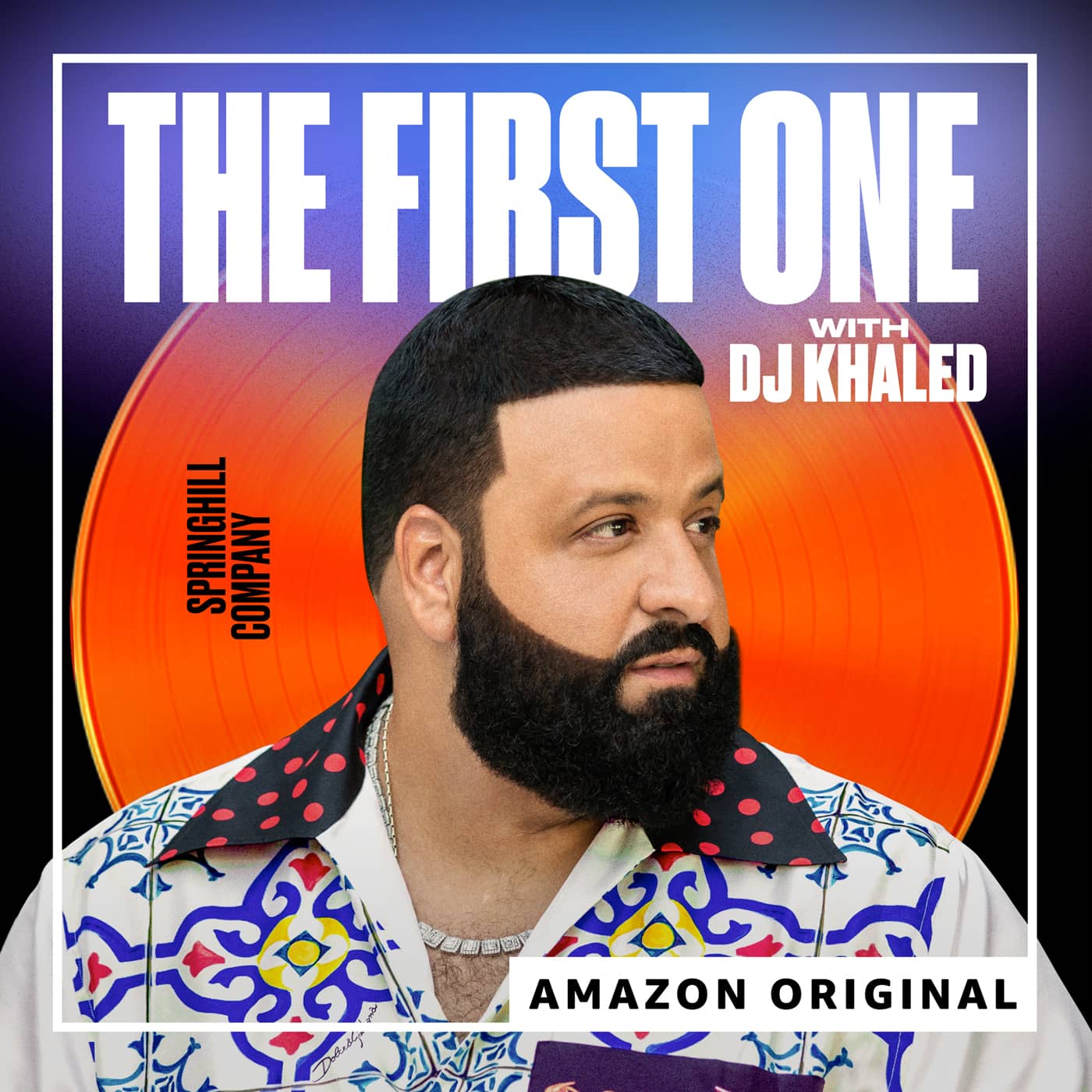 Amazon Music announced today the premiere of “The First One,” a new podcast hosted by one of the most prolific hit makers of the 21st century, DJ Khaled. Developed by Amazon Music and the Springhill Company, the media conglomerate founded by LeBron James and Maverick Carter, “The First One” features the mogul and superstar delving into the biggest hits of all-time with his favorite artists to learn about the songs that made them iconic and eventually legendary. To hear the new podcast, simply ask “Alexa, play The First One podcast” in the Amazon Music mobile app for iOS and Android, on Alexa-enabled devices, or visit https://amzn.to/TheFirstOne.

“Fans everywhere are not only going to love my new podcast series ‘The First One,’ but will have the opportunity to learn about the lives of some of the greatest musicians,” said DJ Khaled. “I’m excited to collaborate with Amazon Music and SpringHill Company to share intimate conversations with my friends to such a large audience, and there are plenty of gems in there. Be on the lookout for every episode of ‘The First One,’ because you never know who’s on next.”

In the inaugural episode of “The First One,” premiering today, Lil Wayne dissects the industry around him during the making of “Tha Block is Hot,” and how his Hot Boys roots taught him to always be ready for the next opportunity. The hip-hop legend reflects on how growing up in New Orleans influenced the song that would eventually change his life and set him on a trajectory to become one of the most prolific and successful musicians and moguls in history. Lil Wayne, who has appeared on every single DJ Khaled album ever, also discusses his long and storied history with Khaled, including the producer’s debut record, “Holla At Me Baby,” as well as “We Takin’ Over” and the first verse after Wayne’s release from prison, “Welcome To My Hood (Remix).” Elsewhere, Lil Wayne speaks at length about the artists who’ve inspired him throughout his career including Mannie Fresh, Cee-Lo Green, Jay Z and Missy Elliott. Additionally, the Young Money CEO also explains to Khaled why a song called “Block Burner” from the debut Hot Boys album, Get It How U Live, inspired the otherworldly sounds that would come to define his career. New episodes will be released every Thursday, only on Amazon Music, and will include interviews with artists like J Balvin, Big Sean, Kelly Rowland, Jon Bon Jovi, Rick Ross, T.I., Fat Joe and more.

Excerpts from episode one include:

Amazon Music recently announced the launch of podcasts in the U.S., U.K., Germany, and Japan, across all tiers of service at no additional cost. Amazon Music customers can access a wide selection of podcasts including new Originals such as “The First One” in the Amazon Music app for iOS and Android, on Amazon Echo devices, and at music.amazon.com/podcasts.

For over two decades, the very mention of DJ Khaled has implied an elevated level of musical greatness, entrepreneurial excellence, and cultural impact. You’ve heard him across a GRAMMY® Award-winning multiplatinum catalog, seen him in blockbusters such as Bad Boys For Life, caught him on the cover of Rolling Stone, watched him on numerous television programs, and felt his presence from the streets all the way up to the Barack Obama White House. He has achieved dozens of multiplatinum and gold certifications, including the sextuple-platinum Billboard Hot 100 #1 “I’m The One” [feat. Justin Bieber, Quavo, Chance the Rapper, & Lil Wayne], quadruple-platinum “Wild Thoughts” [feat. Rihanna & Bryson Tiller], and double-platinum “No Brainer” [feat. Justin Bieber, Chance the Rapper, & Quavo]. The latter propelled his 2019 album, Father of Asahd [We The Best Music Group/Epic Records], to the top of the charts. Not only did it garner a platinum certification, but it also became his third consecutive Top 2 debut on the Billboard Top 200 and emerged as the “#1 Most-Streamed Record” upon release. To date, he has moved 20 million singles and 6 million albums in addition to gathering 4 billion-plus streams. Not to mention, he launched We The Best Music Group—a record label, management, publishing, and production company and in-demand studio. As a committed philanthropist, he founded his 501(c)3 organization The We The Best Foundation. It uplifts individuals throughout underserved communities across the United States and supports various non-profits. He has supported the fight against COVID-19, U2 frontman Bono recruited him as the first social media ambassador for Project Red, and he serves as the national spokesperson for Get Schooled. Now, the power of this legacy defines his thirteenth full-length album—which bears his birth name—Khaled Khaled [We The Best Music Group/Epic Records], preceded by two chart-busting bangers alongside frequent collaborator Drake, namely the certified Platinum record “POPSTAR” and certified Gold record “GREECE.”

About The SpringHill Company

Amazon Music reimagines music listening by enabling customers to unlock millions of songs and thousands of curated playlists and stations with their voice. Amazon Music provides unlimited access to new releases and classic hits across iOS and Android mobile devices, PC, Mac, Echo, and Alexa-enabled devices including Fire TV and more. With Amazon Music, Prime members have access to ad-free listening of 2 million songs at no additional cost to their membership. Listeners can also enjoy the premium subscription service, Amazon Music Unlimited, which provides access to more than 60 million songs and the latest new releases. And with Amazon Music HD, customers have access to the highest-quality listening experience available, with more than 60 million songs available in High Definition (HD), millions of songs in Ultra HD, and a growing catalog of 3D Audio. Customers also have free access to an ad-supported selection of top playlists and stations on Amazon Music. All Amazon Music tiers now offer a wide selection of podcasts at no additional cost, and live streaming in partnership with Twitch. Engaging with music and culture has never been more natural, simple, and fun. For more information, visit amazonmusic.com or download the Amazon Music app.