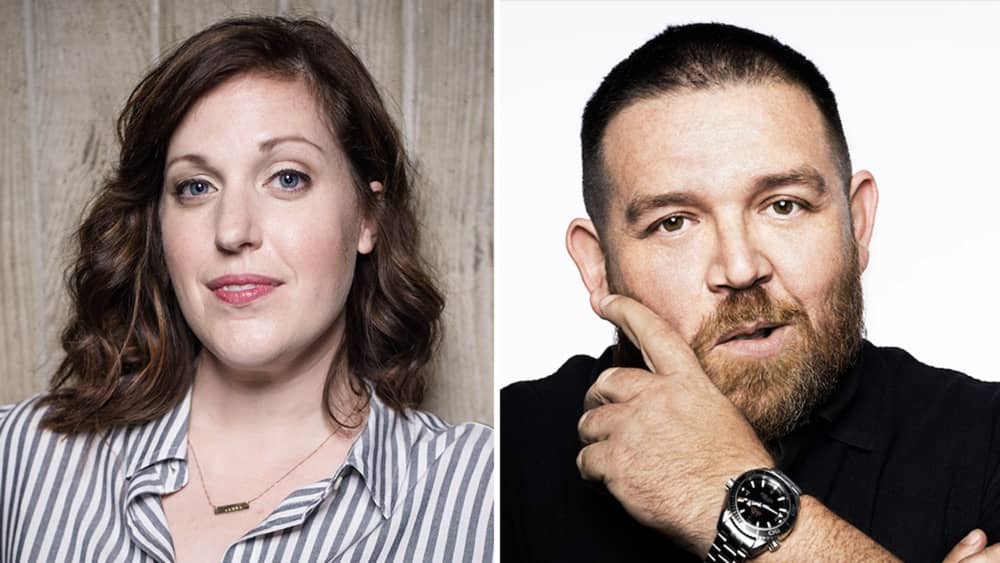 CBS All Access, ViacomCBS’ digital subscription video on-demand and live streaming service, today announced that Allison Tolman and Nick Frost have been cast in the second season of the service’s original anthology series WHY WOMEN KILL. From creator Marc Cherry (“Desperate Housewives,” “Devious Maids”), this season of the dark comedy features a new ensemble cast and storylines set in 1949 that will explore what it means to be beautiful, the hidden truth behind the facades people present to the world, the effects of being ignored and overlooked by society, and finally, the lengths one woman will go in order to finally belong…

Allison Tolman will play Alma, a timid and awkward housewife, who remains optimistic in the face of the world’s cruelty. Alma yearns for a spot in the local garden club and to see her ungainly daughter married, but her life is disrupted once she learns of her husband’s secret hobby. Allison Tolman was discovered in Chicago and cast in a lead role in the first season of the hit crime dramedy “Fargo,” co-starring with Billy Bob Thornton and Martin Freeman. For her work on the show, she was nominated for an Emmy and a Golden Globe and won the 2014 Critics’ Choice Award. Tolman also starred in the thriller “Emergence” and the single-camera series “Downward Dog,” the latter of which premiered at Sundance Film Festival. She can also be seen in CBS All Access’ THE TWILIGHT ZONE and other series including “Castle Rock,” “Mosaic,” “Good Girls” and films “Sisters Brothers,” “FAM-I-LY” and many more.

Nick Frost will play Bertram, Alma’s beloved husband who spends his days as a veterinarian putting sick and injured animals out of their misery. Always kind and good-humored, Bertram has a secret hobby that is darker than his jovial nature lets on. British actor, writer, director and producer Nick Frost most recently starred in “Fighting with My Family” and “Horrible Histories: The Movie – Rotten Romans.” In 2017 Frost co-founded the production company Stolen Picture, which has optioned the rights to the bestselling series “Rivers of London” for TV. Previously seen in “Into the Badlands,” “Sick Note” and the cult zombie film “Shaun of the Dead,” Nick can next be seen in “The Nevers,” “Sweet Dreams” and “Truth Seekers,” a series he also created and co-wrote.

WHY WOMEN KILL examines how the roles of women have changed over the decades, but how their reaction to betrayal…has not. The first season of WHY WOMEN KILL, starring Lucy Liu, Ginnifer Goodwin and Kirby Howell-Baptiste, is available to stream on CBS All Access.

About CBS Studios:
CBS Studios is one of the industry’s leading suppliers of programming with more than 70 series currently in production across broadcast and cable networks, streaming services and other emerging platforms. The Studio’s expansive portfolio spans a diverse slate of commercially successful and critically acclaimed scripted programming, genre-defining franchises including the ever-growing “Star Trek” universe, award-winning late night and daytime talk shows, and an extensive library of iconic intellectual property.

About Imagine Television Group:
Imagine Television Group is comprised of Imagine Television and Imagine Television Studios. Imagine Television was founded in 1986 by Brian Grazer and Ron Howard and is run by Imagine Television President Samie Kim Falvey. Over the years, the company’s productions have been honored with 198 Emmy nominations and 30 Golden Globe nominations. In 2018, the company formed Imagine Television Studios to produce and finance a slate of projects that currently includes the series “Genius: Aretha” with showrunner Suzan-Lori Parks and starring Cynthia Erivo; “Why Women Kill” for CBS All Access from Marc Cherry; “Swagger” for Apple with Kevin Durant and Reggie Rock Bythewood; “Wu-Tang: An American Saga” for Hulu with The RZA and Alex Tse; “68 Whiskey” for Paramount Network; “Langdon” for NBC; “Ms. Pat” for BET+; “Outliers” for HBOMax; and “Joe Exotic” for Amazon. Imagine Television is also producing “Filthy Rich” from Tate Taylor and staring Kim Cattrall for Fox. Other productions include Fox’s award-winning series “Empire”; Nat Geo’s Emmy®-winning Genius anthology series; Fox’s Golden Globe- and Emmy®-winning Best Drama Series “24”; NBC’s Peabody Award-winning series “Friday Night Lights”; Fox’s Emmy®-winning Best Comedy “Arrested Development”; Fox’s “Shots Fired” and “Lie To Me”; WB’s “Felicity”; ABC’s “SportsNight”; and HBO’s “From the Earth to the Moon,” which won the Emmy® for Outstanding Mini-Series. Howard and Grazer began their collaboration in the early 80’s with the hit film comedies “Night Shift” and “Splash,” and continue to run Imagine as executive chairmen.
www.imagine-entertainment.com