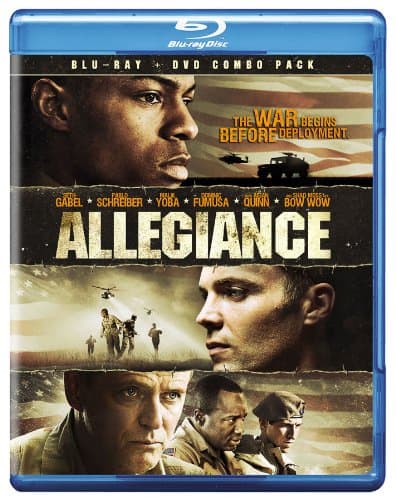 Seat42f and XLrator Media have teamed up to give THREE lucky winners a copy of ALLEGIANCE on BLURAY. For a chance to win leave a comment below telling us why you want to add ALLEGIANCE to your BLURAY collection. Only one entry per person. Contest ends January 25th. Winners will be notified on January 27th via email so make sure to use a valid email address when you post your comment.

ALLEGIANCE, which is based on the director’s own personal experiences while serving in the military pays tribute to the 21 million veterans living in the United States today. It was written, directed, produced and financed almost entirely by veterans. Former Navy SEALS and Army Green Berets were enlisted to train the actors and extras.

SYNOPSIS: After being granted a questionable transfer that will keep him stateside as his National Guard unit deploys for Iraq, Lieutenant Danny Sefton (Seth Gabel) becomes embroiled in a last minute AWOL attempt by one of his soldiers (Bow Wow) — forcing him to choose between his loyalties to the fleeing soldier, his unit and his fiancé.