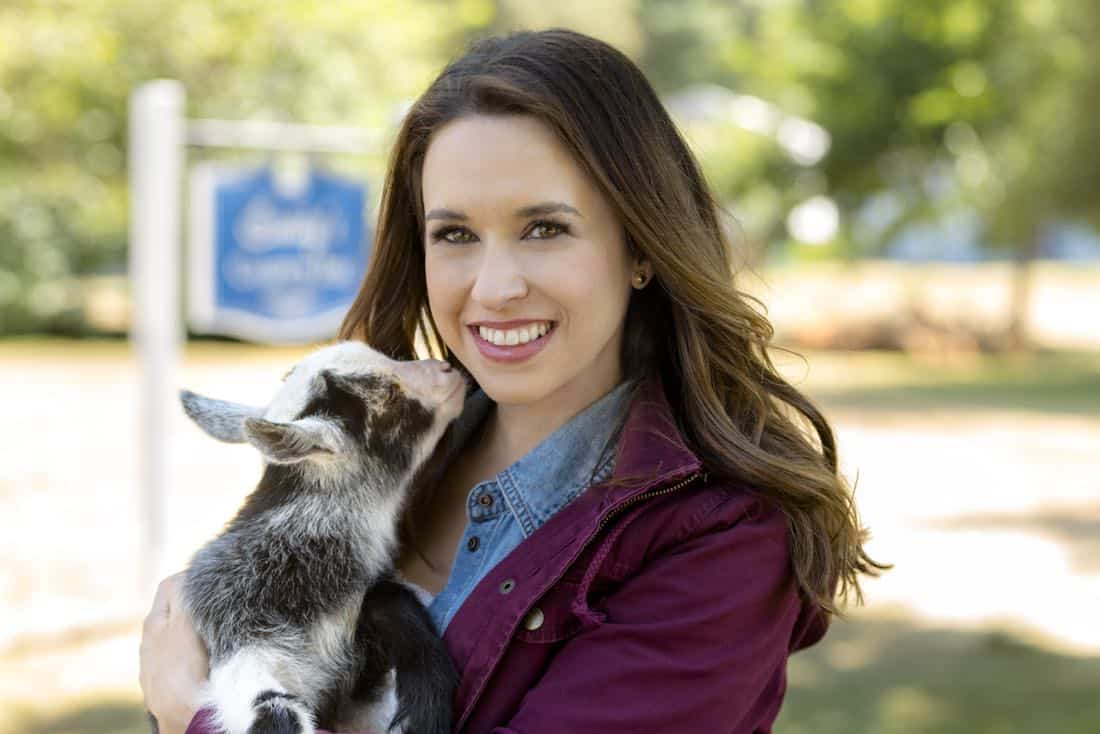 Hallmark Channel’s film “All Of My Heart” starring Lacey Chabert and Brennan Elliott successfully swept fans off their feet and a sequel was quickly ordered to see what the characters of Jenny and Brian would be up to next as their sweet romance continued.  In an exclusive interview, Lacey talks about returning for the sequel and the lure of all these wonderful Hallmark projects.

What initially appealed to you about the role of Jenny Fintley and working on Hallmark’s “All Of My Heart”?

LACEY:  When I first read the script, I thought it was special because it was full of both funny and sweet moments.  I thought the arc between Brian and Jenny created a story that would be a lot of fun to tell.

How would you describe who Jenny is?

LACEY:  Jenny is full of hope and always looks at the positive side of situations. She and Brian come from such different worlds. Their differences drive them crazy in the beginning! In the end, those same differences become the things they find most amusing about one another.

What do you most admire and/or like about Jenny?
LACEY:  I admire that she’s always so positive yet realistic about their circumstances.

What is it like working alongside Brennan Elliott?
LACEY:  Brennan and I have now done three movies together so we’ve become good friends. As an actor, he’s incredibly creative which makes for a wonderful scene partner.

What has been your favorite part about working on both the “All Of My Heart” films?
LACEY:  I love the setting for the movie. Although we had to film at a new house for the second one, the small town/country feeling of the movie is so charming. I’m an animal lover so filming with baby goats was very fun. They literally bounced around set. So adorable!

What has been the one thing you as an actor haven taken away from working on “All Of My Heart: Inn Love“?
LACEY:  This was my third movie since I’ve become a mother. My daughter turned one on our final day of filming. In this new phase of life, I’m learning to balance being a mom and a working actor. Life is busier than ever before and it’s not always perfect, but I’m the happiest I’ve ever been. Julia brings us such joy.

What do you hope viewers take away from watching “All Of My Heart: Inn Love”?
LACEY:  At its core, the movie is about the love between Brian and Jenny.  Their relationship faces challenges that most people have encountered so I think viewers will be able to relate to their journey. At the end of the day, the love they share is worth fighting for and must be protected. I think that’s an important message.

There is clearly a lot of chemistry between you and Brennan.   What do you think contributes to the sizzle in the Brian-Jenny scenes?
LACEY:  The fact that we have a genuine friendship off screen helps us bring these characters to life in a fun way. There’s a mutual respect between the two of us.

Having done a large number of films for Hallmark, what initially made you want to join the Hallmark family?
LACEY:  I was drawn to the feel-good aspect of the movies. I love being a part of something that guarantees a happy ending.

What do you think you have learned from working on the Hallmark films and series?
LACEY:  I’ve learned that the viewers of Hallmark movies are a very loyal group of people! I appreciate the supportive feedback I’ve received on social media.

For you, what are the positive aspects of being part of the growing Hallmark family?
LACEY:  In this chaotic world, sometimes people just want to escape to a happy place. No one is better at guaranteeing an uplifting viewing experience than Hallmark. I’ve truly enjoyed working with them.

What has surprised you most about your career so far?
LACEY:  I think one of the more surprising aspects and also one of my favorite, is that I never stop learning. I always see ways I can grow as an actor and I’m grateful for that ever evolving  perspective. While I am incredibly thankful for all of the success which I’ve been blessed, I’m also very grateful for the disappointments. As hard as they are in the moment, looking back I realize every experience has molded me into who I am today.

At this stage of your career, what do you think you have learned from the amazing variety of roles and projects you have worked on?
LACEY:  I guess I’ve learned that there is so much more I still want to learn and experience! I’ve had the pleasure of having so many different types of experiences. I started out on Broadway in “Les Miserables,” done a soap opera, TV series, feature films and different types of voiceover work. I love it all because the work is challenging in a variety of ways. I feel very grateful to have had so many different types of experiences. I’ve had the chance to work alongside amazing people that have taught me so much.  There are so many stories I still wish to tell and different characters I wish to play, so my hope is that this is only the beginning!

Then what are the perks of where you are in your career right now?
LACEY:  Now that I am mother, working means being away from my daughter. I’m very fortunate to be in a position where I can be a little more picky about what I choose to be a part of. I definitely consider that a perk.

You seem to take on roles that are very challenging. Do any of your characters and the situations they find themselves in ever leave a lasting impression on you?
LACEY:  Yes! I do my best to sink into the characters I play, so sometimes I have to remind myself to snap out of it!

Has there been any great advice you have gotten?  What advice would you offer to other upcoming and aspiring actors?
LACEY:  I worked with an actor when I was 20 that I really admired and he said something that has always stuck with me. He said, Just keep working. Continue moving forward. Make decisions with care, but don’t take it all too seriously.
My personal advice is to always follow your passion! Be prepared to endure a lot of opinions, and always remain true to yourself.

At a time when women’s voices are rising to be heard and respected around the country and world, what do you recommend your fans do to lend support in that endeavor?
LACEY:  Because I have a daughter now, being a positive influence is more important than ever to me. I want to set an example that empowers her to create her own definition of success!
I think it’s important that we all support women story tellers.

Do you have any other upcoming projects that you can share that fans should keep an eye out for?
LACEY:  November 11th I have a Christmas movie airing on Hallmark Channel, “The Sweetest Christmas.”

To see Lacey and Brennan light up the screen with their magnetic chemistry, be sure to tune in for the premiere of “All Of My Heart: Inn Love” on Saturday, October 7th on the Hallmark Channel.