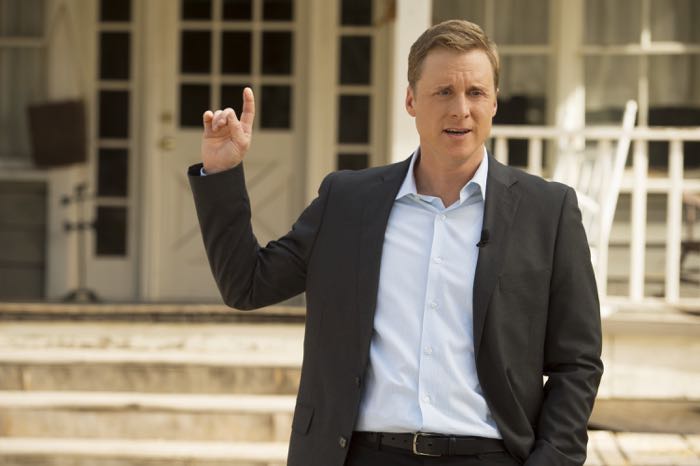 If you’re looking for real news stories from Adult Swim’s Newsreaders, you’re barking up the wrong tree. But if you’re looking for a wild take on how the news is delivered and stories that are as insane as they are hilarious, then this series is for you.

In the show’s second season, Alan Tudyk took over the head anchor chair to play newsman Reagan Biscayne, who was a new kind of character for the actor.

“It’s interesting,” Tudyk said about playing Biscayne. “It was a little education for me, the actual doing of it. The humor in this type of character comes in their authority and also their stupidity. Because you expect them to be an authority, as a newscaster. They come to you and tell you very serious things. But if you have someone who’s a serious authority and they’re talking about headless football players.” Tudyk said with a laugh.

Tudyk was referring to the show’s next episode, which airs on Thursday, Nov. 27 at midnight.

“It’s a familiar story of the athlete who shows a great deal of promise early on, but then has a tragic accident,” he said about the episode. “They overcome the accident and prove that they can do it, even with a handicap. In this case the handicap is that he has no head. In a clothes dryer accident his head was decapitated, but he wants to get back out on the field and everyone is behind him.”

It was an episode that Tudyk won’t soon forget. “It was funny coming to set. I thought, ‘I don’t know how they’re going to do this’ and I show up on set and there’s this kid there, like a football player high school kid, but around his neck there’s a Sharpie line. That’s where they were going to go in later and remove his head from that sharpie line, up.”

Tudyk said he felt for the kid, who may have had a hard time explaining the role to his family. “I was trying to think of what it was like to be that kid. He’s like, ‘I got the job!’ and ‘Those are my arms, I swear!'”

You might think that a scene like that would make it hard for Tudyk to keep a straight face, but Tudyk assured me that’s not usually the case. “Usually when I’m doing lines I try not to be one of those actors that never break. It’s something that I try to never do on camera. I swallow it and never let it out,” he said.

That’s not to say it doesn’t happen sometimes, though. “There was one where I was cracking up. It was during the episode where Narge Hemingway (Dannah Feinglass Phirman) was reporting on how we make the news in Newsreaders and that’s where you see these prisoners, all these guys in orange jumpsuits, putting the show together really professionally.”

Tudyk went on to describe exactly the moment when he nearly lost it. “I had one line where I hand these two prisoners this copy and say, ‘This is a yesterday problem, not a 10-minutes-to-air problem’ then I walk off. Then you see in the background a guy shank another guy. [laughs] In the background somebody’s getting shanked and I was cracking up a lot with that one.”

Humor is something the actor understands, even when he has done more serious roles, such as the one that he is perhaps best known for. “A lot of drama has humor in it. Life is funny,” Tudyk said about which drama roles he likes to play. “I like drama with a lot of humor in it. I did a TV show called Firefly and I re-watched it again not too long ago, and even though it was a one-hour drama, among other things, it was so funny. Joss Whedon always brings humor to his movies and any project he has. He found the humor within these serious situations.”

Since he brought it up, I couldn’t help but to ask Tudyk about the beloved show, of which I myself am a hardcore fan. The actor remarked how the fan reaction to it surprised him, even getting new fans to this day.

“Shortly after the show was cancelled, I didn’t think it would have so many new fans. Now there are people like 14-year-olds whose parents were fans and they say, ‘you’ve got to watch this.’ I wouldn’t have predicted that at all.”

Over the years, Tudyk has had a chance to get to know fans of the series, which was something he wasn’t sure he wanted to do in the beginning.

“Certainly the extension, that aspect of it – that [after] we’re cancelled we started getting asked to go to science fiction conventions in London and all over the world [was surprising]. I guess I had heard of Comic-Con, but it certainly wasn’t what it is now and I thought it would be a little uncomfortable and meet fans because I didn’t understand what it was. Now I get it, now I’ve been to enough of them and I’ve met so many fans I understand how it’s still alive for people.”

Tudyk got the chance to re-experience the show himself not too long ago.

How does Tudyk feel about the fans continuing to love the show and share it with new people after so many years? “I sure do appreciate it,” he said. “Something you love, that people are keeping alive, that’s great. [And] it’s still only 14 episodes long.”

Be sure to check out the latest episode of Newsreaders airing this Thursday, Nov. 27 at midnight on Adult Swim.