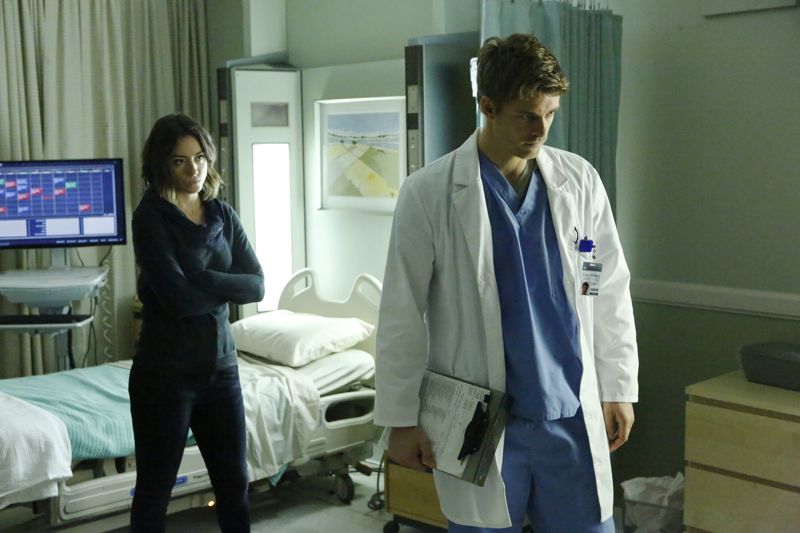 MARVEL’S AGENTS OF S.H.I.E.L.D. does not do slow and quiet, as evidenced in the third season premiere last night, “Laws of Nature.” Months have passed, and Inhumans are starting to show up across the globe. S.H.I.E.L.D. seeks to catch and protect them, but they suddenly have competition in that market, and it’s not Hydra (or, at least not entirely Hydra). Not all the members of the team are focused on this, though, with personal issues driving the motivations of several.

Daisy (Chloe Bennet) is probably the most changed. Rejecting the name Skye, she now leads Coulson’s team to find the Inhumans. An intense opening scene in which she meets Joey Gutierrez (Juan Pablo Raba, Narcos) beautifully illustrates the challenges she faces, both physical and emotional. It’s not easy for someone to suddenly gain powers they can’t understand and control without warning, and while Daisy has gone through it herself, not everyone is receptive to her assistance.

Mack (Henry Simmons, now a full-time cast member) does his best to help Daisy, but he doesn’t have the same experience she has, so that’s why she approaches Lincoln (Luke Mitchell, also promoted to full-time). But Lincoln wants nothing to do with her, even after the monstrous Lash (former NFL player Matthew Willig), who looks like Raina’s overgrown big brother, destroys Lincoln’s new life. So Daisy is failing on multiple fronts.

Her failure does not mean that she should be written off. Daisy has shown remarkable strength and character over the past two seasons, growing into a very formidable member of the team, and earning authority despite her limited tenure. While she is drawn into MARVEL’S AGENTS OF S.H.I.E.L.D. because of her past, she is well-poised to write her own future, and it’s a pleasure watching her go through this. And Lincoln will have to come around, eventually.

The best character on MARVEL’s AGENTS OF S.H.I.E.L.D., though, remains Coulson (Clark Gregg). Armed with a new hand (hehe), as we knew he would be, Coulson spends most of “Laws of Nature” tracking down Rosalind Price (Constance Zimmer, UnREAL, Entourage, House of Cards, etc.), his competition for the Inhumans. Their exchange in the subway is perfect, and in Rosalind, I feel like Coulson has met his match.

Though, they aren’t exactly on opposing sides. It turns out, someone is killing Inhumans, but it’s not Rosalind’s group. I think. (Maybe it’s Hyrdra?) So that means this could be a match made in heaven. Or T.A.H.I.T.I. Wherever. As long as Zimmer sticks around as long as possible (as allowable by her other work), I’m happy.

Speaking of chemistry, the electricity between Hunter (Nick Blood) and Bobbi (Adrianne Palicki) has not cooled off. They are at odds and yet happy together at the same time. This pair has an odd balance, one born of both love and conflict, and yet it seems like they are as good together as they’ll ever be, and it’s nice. Someone on MARVEL’S AGENTS OF S.H.I.E.L.D. has to be happy, and my vote is for these two. Who may very soon have their own spin-off anyway.

Poor Fitz (Iain De Caestecker) isn’t so lucky. He’s spent months trying to find a way to get Simmons (Elizabeth Henstridge) out of the monolith. Even Coulson gives up, telling Fitz it’s hopeless and she’s probably dead. The fact that she isn’t, instead trapped in an alien wasteland, with the rock-thing serving not as a cage, but a portal, only makes Fitz’s seemingly hopeless mission feel warranted.

I can’t help but wonder, though, despite not wanting Simmons off the show, if it might not have been a more powerful story to see Fitz dealing with a truly lost cause. The hero pushing on is a predictable archetype, and usually MARVEL’S AGENTS OF S.H.I.E.L.D. is better than this. It also doesn’t feel entirely right that Coulson and others have given up on Simmons without confirming what happened. I’m still waiting for the twist to redeem this plot, such as Coulson perhaps still working on this in secret, and I expect there will be one coming. Hopefully.

Ward (Brett Dalton) and May (Ming-Na Wen) are both absent from “Laws of Nature,” but that’s OK. MARVEL’S AGENTS OF S.H.I.E.L.D. has expanded its cast enough that not every player must be in every hour, and there’s plenty going on without them. Of course, I look forward to their imminent returns in the near future. But even sans those two, the season premiere is a solid one, setting up a new, interesting arc as the Inhuman-triggering substance spreads globally, and providing plenty of character drama meat to boot. This is a satisfying first episode back for a reliable series.