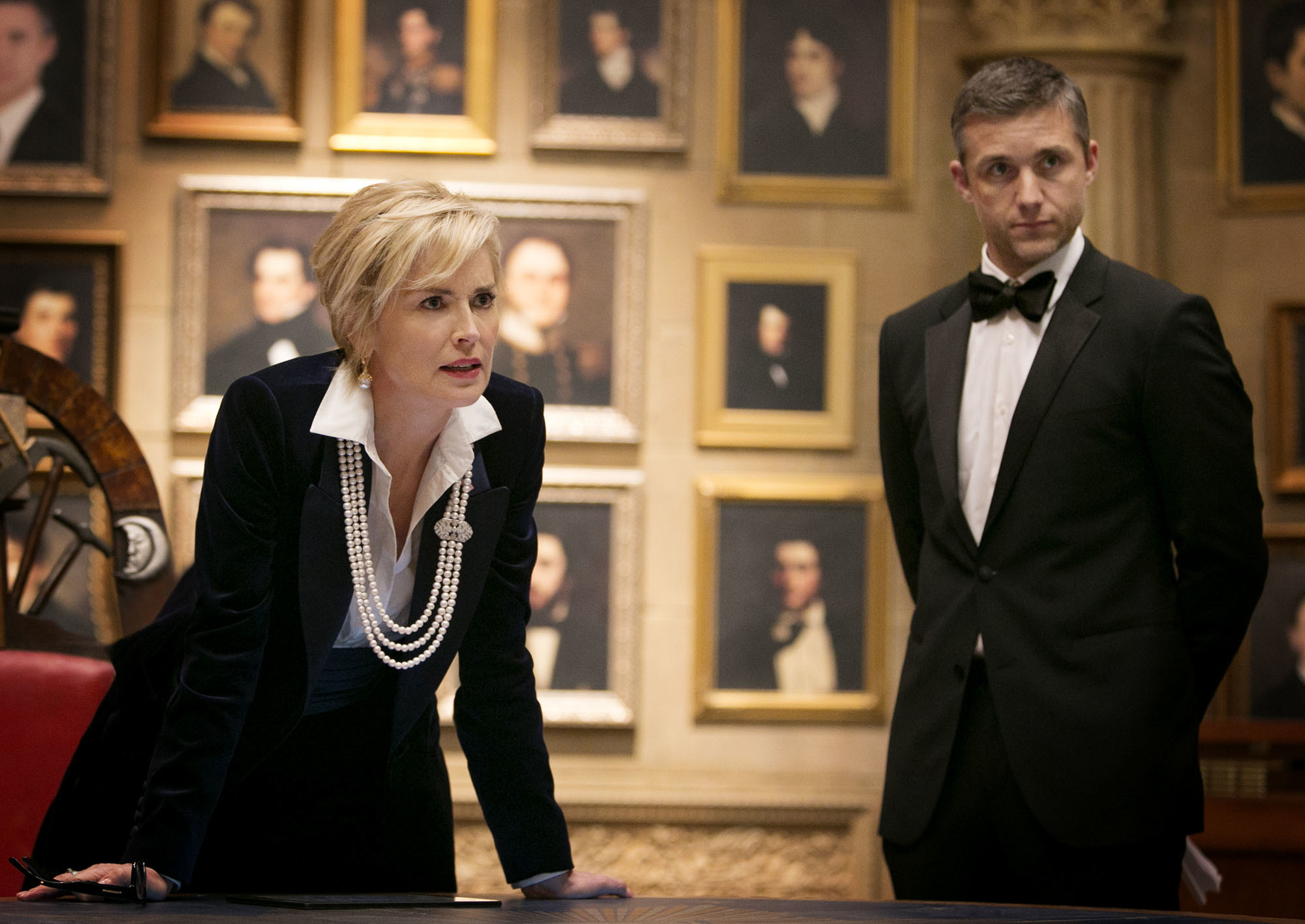 TNT’s latest drama is AGENT X. Apparently, there is a secret section in the Constitution that outlines the Vice President’s real power, and remains unknown to the public, or even the President, to this day. These words give the VP the ability to use an unnamed agent to do the bidding of the U.S. that must be kept off books. AGENT X is that agent, and the new Vice is ready to use him.

(Yes, this is fiction. No such article exists.)

The center of AGENT X is Natalie Maccabee (Sharon Stone, Casino). The first woman to hold the second highest office in the land (have they never heard of Selina Meyer?), she is surprised to learn about the Agent X program from her new right-hand man, Malcolm (Gerald McRaney, House of Cards). Having to take control with barely any direction, President Thomas Eckhart (John Shea, Smallville) himself must deny his knowledge now that he’s been promoted to the top spot, Natalie is nervous at first, but settles into the job quite nicely.

On the other side of the show is Agent X himself, John Case (Jeff Hephner, Chicago Fire). He is an almost-superhuman agent who can slide in and out without being seen. In the first couple of episodes he tangles with Olga (Olga Fonda, The Vampire Diaries), an enemy spy who is quite formidable, and still bests her without too much trouble. He’s the sexy eye candy for the ladies, bursting with the testosterone that keeps the guys coming back.

So AGENT X splits its time between two different types of shows. One part is adrenaline-fueled action, James Bond on steroids, and the other deals with politics and conspiracy theories, a more grounded version of The Librarian. Both go for a simplistic world view, without getting too deep, and with the same type of attitude with which the main player in 24 approached the world. It’s light, popcorn fare that is entertaining, but refrains from going too deep.

The cast is good. Stone and McRaney are always likeable, and Hephner fits well into the archetype. James Earl Jones (Star Wars, The Lion King) shows up as the Chief Justice of the Supreme Court, which lends some gravitas to the series. This isn’t a character study type of program, so it’s unlikely any of these actors will get to deliver an impressive, Emmy-worthy performance. But they do just fine in the roles they’ve been given, and make the show pretty watchable.

My problem with TNT series these past few years is that they lean too heavily on the action, not paying enough attention to plot and the cast. AGENT X improves in this category, still giving the basic element that TNT fans have come to expect, but with a bit better foundation to back it up. As I’ve said, it’s not deep, but it also doesn’t flit over things as quickly as Falling Skies or The Last Ship, marking a noticeable improvement for the content of this network.

That being said, I’m still not going to watch Agent X. There are a ton of very high quality series out right now that are just plain better than this one. This is a sign TNT is moving in the right direction, but it’s not there yet. If you want mindless entertainment, this is one of the best examples I’ve seen in awhile and will serve you well. This show itself, given time, might even become more worthy. But for now, if you’re looking for the biggest talent in the writing and production department, there are plenty of choices on AMC, FX, HBO, Starz, and others that run circles around this one. When there were fewer choices on television, AGENT X would have stood out. Today, it just doesn’t measure up.