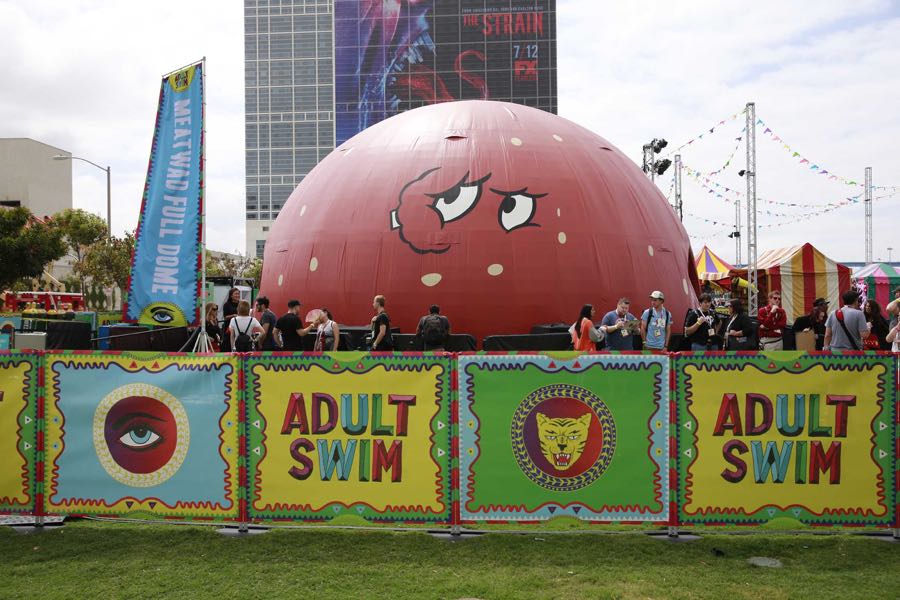 Adult Swim is ready to once again take on one of the largest and most exciting fan experiences of the year during San Diego Comic-Con this month. Fans can always expect the unexpected from Adult Swim, as they dive into celebrity-filled panels and signings featuring series stars, creators and producers from Robot Chicken and Rick and Morty, a new animated sketch show Brad Neely’s Harg Nallin’ Sclopio Peepio and the much-anticipated Samurai Jack. The free swag will be flying at the network’s official booth in the convention center and also at the exciting Adult Swim on the Green experience overlooking the bay.

First stop, the convention center! Get your game on at the Adult Swim Booth (#3721) with the Return To Feline Fun Hole Slide Mouth, Part 2. Limber up and come lob fishy fun sacks into our illuminated cat holes. Steady your trembling paws and pray your sacrifice to our great glowing kitty doesn’t go unnoticed. If your aim is true, she may cough up something beautiful and exciting.

Need to escape the crowds inside and feel the sun on your face? Adult Swim On The Green is back and it’s gonna be greener than ever. It’s free, it’s fun and it’s on the green behind the convention center at 5th Avenue Landing and Convention Way, Thursday through Sunday from 11:00 a.m. – 6:00 p.m. Everything you’ve ever dreamed of will be up for grabs at the Carnival Midway, which will be full of fancy games and Adult Swim themed prizes. Have your soul photo taken in the Mr. Pickles photo booth, then head over to The Meatwad Full Domeand challenge your mind and stomach to 360 degrees of trance-inducing hallucinations in  “Six Minutes Of Your Life That You’ll Never Get Back.” Back for its fifth year, State Farm® is helping Adult Swim fans best prepare for the con with an Oversized Prizeball Machine that will dispense prizes to maximize fan experience on the green. A few lucky con-goers will win access to exclusive Adult Swim screenings and on-site games. All events are free for those that are 18+. RSVP at AdultSwimPresents.com to fast track your entrance.

The fun doesn’t stop when the sun goes down, so come cuddle up with Adult Swim under the stars and check out what’s on the horizon with Nighttime on the Green featuring screenings from 8:00 p.m. -10:00 p.m. with lineup starting at 7:00 p.m. On Thursday join Toonami Pre-Flight for a night of behind-the-scenes info on our popular anime programming block with your hosts Jason DeMarco, Gill Austin, Steve Blum (Voice of TOM), and Dana Swanson (Voice of SARA). Friday we expose you to the unknown with “Things You’ve Never Seen,” a night of specials and original pilots. For our final night on Saturday, don’t miss an improvised evening with Rick and Morty creators Dan Harmon and Justin Roiland. Arrive early to get suited up for the show by SNICKERS® in custom Ricky and Morty costumes.

Need more? Below is a full list of Adult Swim panels and signings for Friday, July 22 – Saturday, July 23. Panels and signings as well as talent scheduled to appear, are subject to change. For continuing information about Adult Swim’s plans at Comic-Con and to RSVP for events, please visit AdultSwimPresents.com.

Tickets are required for all signings at the Adult Swim Booth (#3721). A limited number of tickets will be given out at the booth on the day-of. First come. First served.