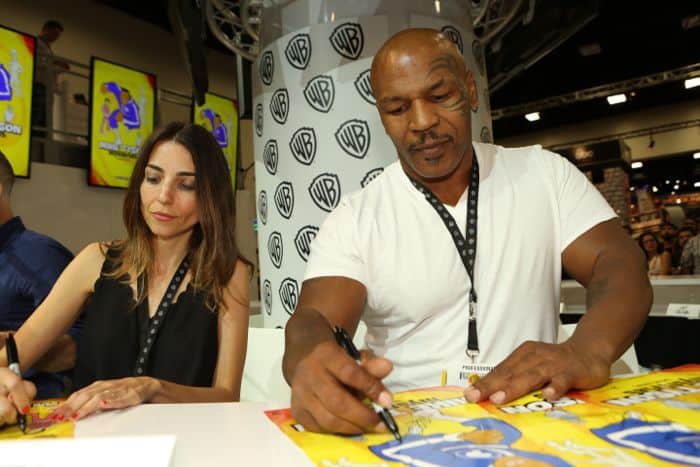 Adult Swim is back and ready for fans to dive into new and unexpected experiences at San Diego Comic-Con this month. Fans will get a first look at all-new programming at celebrity-filled panels and enjoy free signings featuring series stars, creators and producers from Robot Chicken and Rick and Morty, a new animated series The Jellies! from Tyler, The Creator and Lionel Boyce, and the knock-out hit series Mike Tyson Mysteries. The hottest spot on the bay is back with the Adult Swim On the Green experience, featuring free games, activities, tons of giveaways, and live-streaming from the stars of AdultSwim.com.

Come spend a leisurely afternoon at Adult Swim On the Green! It’s free, it’s fun and right behind the convention center at 5th Avenue Landing and Convention Way, Thursday through Sunday from 1:00 p.m. – 6:00 p.m.  Come relax on the back of a ferocious beast gallivanting through It’s A Fish Hole, get a six-minute mind massage from the upgraded Meatwad Dome 4D Experience – now with motion seats, or visit the oversized Claw Machine sponsored by State Farm®, which dispenses endless goodies geared towards maximizing the Con experience. This year’s green features all-new games, friends, prizes, fun, streams (of the live variety), motorized animals, a tarot card reader, dart throwing, and a must-have on the sun-drenched bay – shade. It’s a live choose-your-own-adventure in real life and all events are free for those that are 18+. Sign-up at AdultSwimPresents.com to fast track your entrance.

New this year, AdultSwim.com will be live broadcasting your favorite streaming shows, including FishCenter, Stupid Morning Bullshit, Williams Street Swap Shop, Development Meeting, and more all from Adult Swim On the Green.  Celebrity guests will be stopping by throughout the convention to chat all weekend long.  The streams will be live Thursday – Saturday 1:00 p.m. – 6:00 p.m. and 8:00 p.m. – 10:00 p.m and on Sunday, 12:00 p.m. – 5:00 p.m.  Stayed tuned on Friday, as State Farm helps the Williams Street Swap Shop hosts give a VIP experience to a few lucky fans during a special live streamed episode.  SNICKERS® Brand will sponsor a live stream of FishCenter, which will include a custom segment of “Coin Quest,” where the fish will swim through branded, superimposed graphics to win points as the hosts comment on all the action.

When the sun goes down, fans can come and unwind with free screenings. Nighttime is the right time to stare into the future at Adult Swim’s Nighttime on The Green with screenings featuring the latest series and pilots from 8:00 p.m. -10:00 p.m. with lineup starting at 7:00 p.m. On Thursday enjoy Toonami Pre-Flight previewing behind-the-scenes content of our popular anime programming block alongside hosts Jason DeMarco, Gill Austin, Steve Blum (Voice of TOM), and Dana Swanson (Voice of SARA). Friday, the unknown will be revealed at “Things You’ve Never Seen,” a night of specials and original pilots, brought to fans by SNICKERS®.  Blankets, chocolate and surprises provided.

The frenzy over last year’s Rick and Morty screening demanded we go bigger.  This year, Old Spice will be helping even more fans get their burning questions answered with a special evening featuring creators Dan Harmon and Justin Roiland at Petco Park on Saturday night from 7:30 p.m. – 11:00 p.m.

Need even more Rick and Morty?  The #Rickmobile will be rolling all over San Diego all week long.  Track the mad scientist’s movements online as the custom mobile pop-up shop stocked with exclusive Rick and Morty items makes its way across Southern California.

Even if you need a ride there, Adult Swim is joining forces with SNICKERS® to unveil a fleet of vehicles wrapped with custom artwork from our hit streaming show FishCenter.  The cars will be deployed throughout the Gaslamp district as part of our Free Rides Program on Thursday-Sunday from 11:00 a.m. – 7:00 p.m.  So, sit back and relax, as passengers will be able to snack on SNICKERS® Crisper bars and experience the best of Adult Swim content via rear headset monitors.  But before you grab a ride, don’t miss the State Farm branded prize cycles that will be rewarding con-goers with free swag throughout the Gaslamp.

If that’s not enough- below is a full list of Adult Swim show panels and talent signings for Friday, July 21 – Saturday, July 22. Panels and signings, as well as talent scheduled to appear, are subject to change. For continuing information about Adult Swim’s plans at Comic-Con and to RSVP for events, please visit AdultSwimPresents.com.

It was a unanimous victory last time, but Iron Mike Tyson is taking on Comic-Con again and this rematch is sure to live up to all the hype.  Currently in its third season of solving mysteries, the Mike Tyson Mystery Team has all-new episodes airing on Adult Swim. Join Mike Tyson, fellow voice cast member Rachel Ramras (The Looney Tunes Show) and producer Hugh Davidson (The Looney Tunes Show) for an exclusive look at upcoming episodes.

Wristbands required for all signings. A limited number of wristbands will be given out on The Green the day of.  First come, first served.