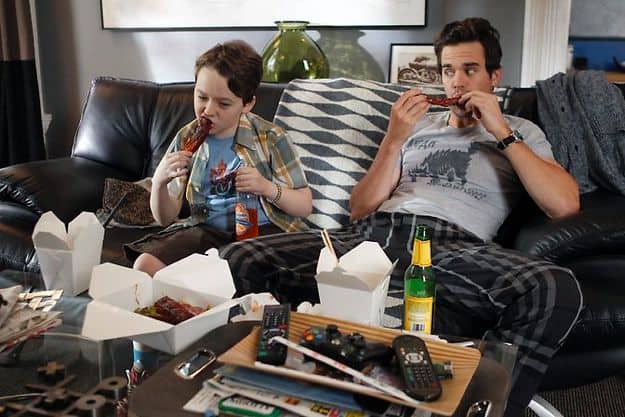 Will Freeman (David Walton, “Bent,” “Perfect Couples”) lives a charmed existence as the ultimate man-child. After writing a hit song, he was granted a life of free time, free love and freedom from financial woes. He’s single, unemployed and loving it. So imagine his surprise when Fiona (Minnie Driver, “Good Will Hunting,” “Barney’s Version”), a needy, single mom and her oddly charming 11-year-old son Marcus (Benjamin Stockham, “1600 Penn”) move in next door and disrupt his perfect world. When Marcus begins dropping by his home unannounced, Will’s not so sure about being a kid’s new best friend, until, of course, Will discovers that women find single dads irresistible. That changes everything and a deal is struck: Marcus will pretend to be Will’s son and, in return, Marcus is allowed to chill at Will’s house, play ping-pong and gorge on steaks, something his very vegan mom would never allow. Before he realizes it, Will starts to enjoy the visits and even finds himself looking out for the kid.  In fact, this newfound friendship may very well teach him a thing or two that he never imagined possible — about himself and caring for others. Also starring are Al Madrigal (“Gary Unmarried”) and Anjelah N. Johnson-Reyes (“Our Family Wedding”).