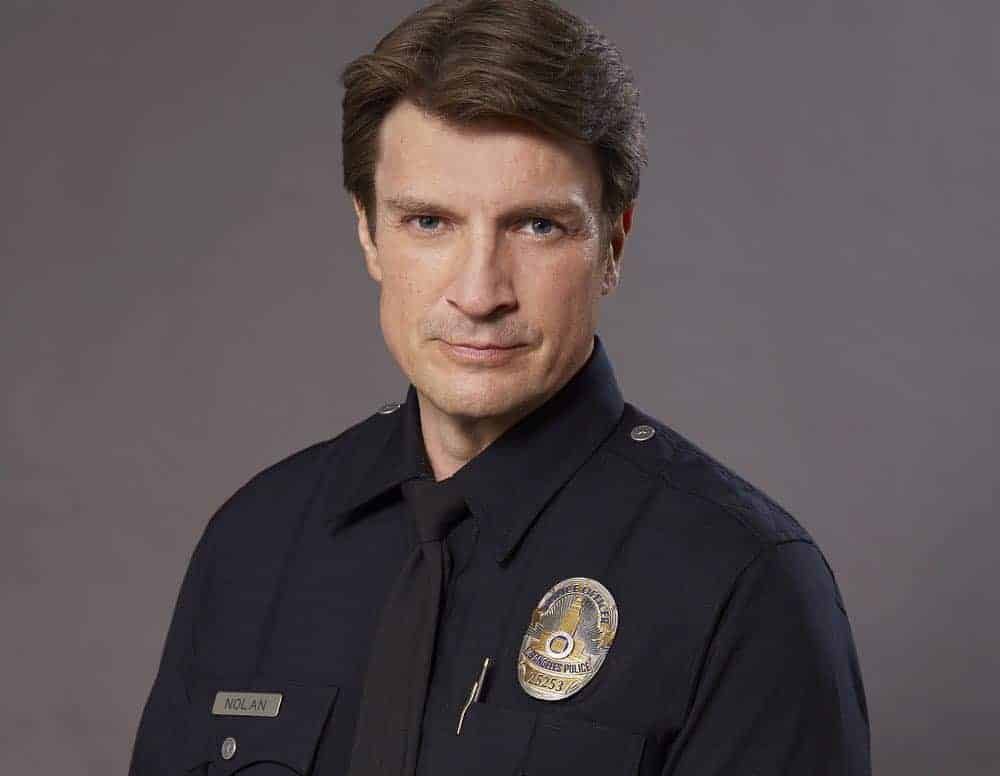 Coming on the heels of a tremendously successful 2017-18 season that boasts the No. 1 show on television (“Roseanne”), the No. 1 new drama (“The Good Doctor”) and the No. 1 reality show launch (“American Idol”), ABC is set to announce a stellar slate of programming for the 2018-19 season. Channing Dungey, president, ABC Entertainment, will unveil the network’s new lineup to the advertising and media communities this afternoon at Lincoln Center’s David Geffen Hall in New York City.

“We enter the new season bolstered by success and the stability that it affords us,” Dungey said. “The new shows we unveil today strengthen an already-vibrant schedule of some of the best television has to offer. These shows, with their compelling characters and aspirational storytelling, will keep our momentum going.”

A total of eight new series have been announced for ABC’s 2018-19 season, including the one-hour dramas “A Million Little Things,” “The Fix,” “Grand Hotel,” “The Rookie” and “Whiskey Cavalier,” and the half-hour comedies “The Kids Are Alright,” “Schooled” and “Single Parents.”

Additionally, “Dancing with the Stars: Juniors,” previously announced last year, will be on the fall schedule. A fresh take on an established favorite, the show will pair celebrity kids with professional junior ballroom dancers to perform choreographed routines, which will be judged by a panel that will include renowned ballroom experts. “Dancing with the Stars: Juniors” is produced by BBC Studios.

“The Alec Baldwin Show” (new title), which first debuted as a sneak preview in March, will also air this fall. Starring the three-time Emmy(R) winner, the one-hour show will showcase Baldwin’s in-depth conversations with compelling personalities. The show is executive produced by Jason Schrift, along with Baldwin and Mallory Schwartz via his El Dorado Pictures.

Fan favorites “American Housewife,” “black-ish,” “For The People,” “Fresh Off the Boat,” “How to Get Away with Murder,” “Speechless,” “Splitting Up Together,” and “Station 19” will also return, joining previously announced series “America’s Funniest Home Videos,” “American Idol,” “The Bachelor,” “The Bachelorette,” “Child Support,” “Dancing with the Stars,” “The Goldbergs,” “The Good Doctor,” “Grey’s Anatomy,” “Marvel’s Agents of S.H.I.E.L.D.,” “Modern Family,” “Roseanne” and “Shark Tank.”

On average since the conclusion of the Olympics in February, ABC is the No. 1 TV network among Adults 18-49. For the entire 2017-18 season, ABC ranks a strong No. 2 in entertainment programming, pacing within 100k Adults 18-49 of tying NBC for No. 1. The Network claims 3 of the Top 5 broadcast entertainment shows this season (“Roseanne,” “Grey’s Anatomy” and “The Good Doctor”), a network-leading 5 of the Top 10 comedies (“Roseanne,” “Modern Family,” “Splitting Up Together,” “The Middle” and “The Goldbergs”), the No. 1 freshman series (“The Good Doctor”) and the No. 1 TV show (“Roseanne”).

Fall premiere dates will be announced at a later time. Please note that shows picked up to series but not listed on the schedule below will debut later in the 2018-19 season. 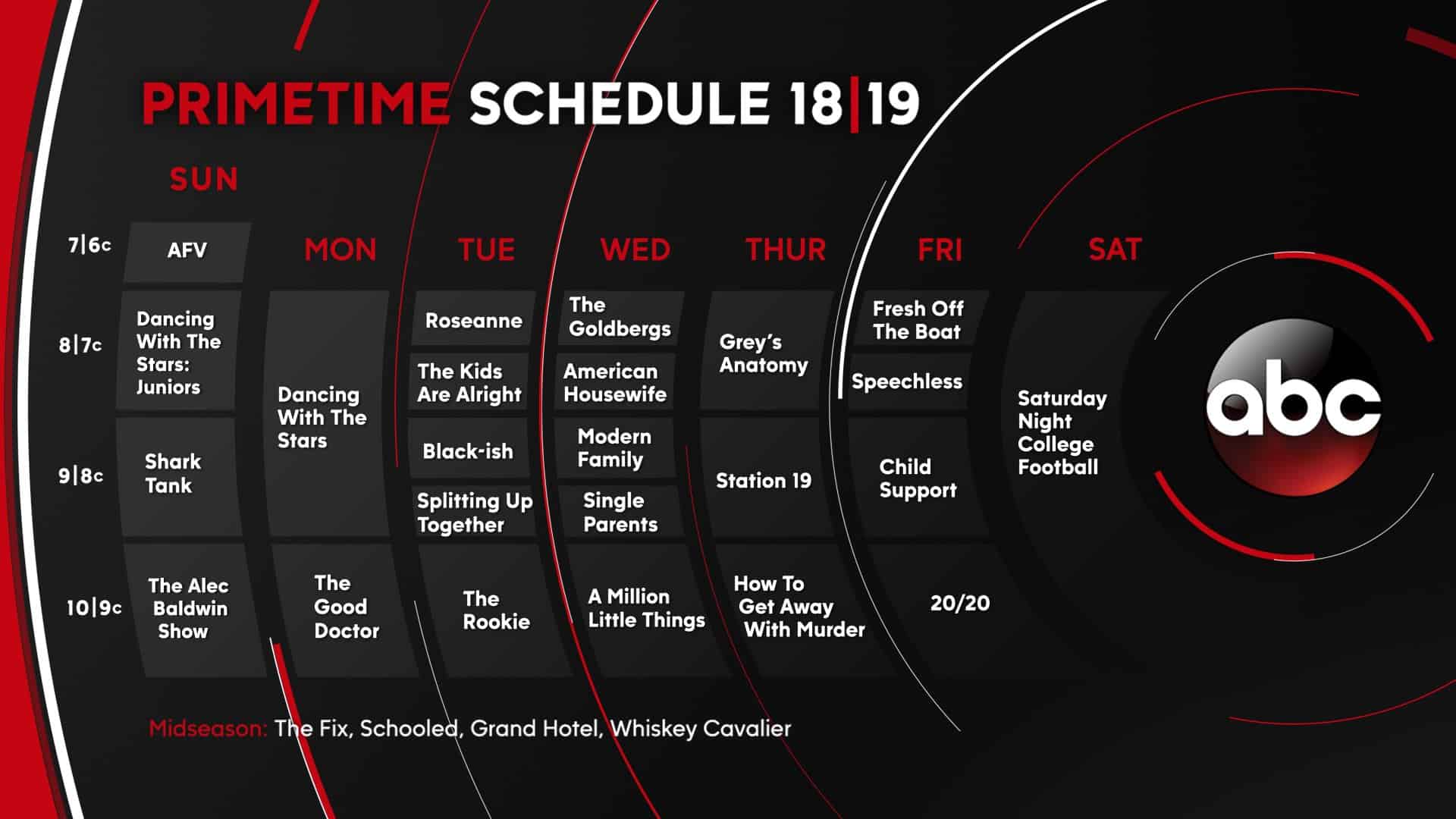 ABC’s fall prime-time schedule is as follows (all times listed are Eastern/Pacific). New shows are in bold:

Show descriptions for new ABC series are below. For information about returning ABC shows, visit www.disneyabcpress.com.

They say friendship isn’t one big thing, it’s a million little things; and that’s true for a group of friends from Boston who bonded under unexpected circumstances. Some have achieved success, others are struggling in their careers and relationships, but all of them feel stuck in life. After one of them dies unexpectedly, it’s just the wake-up call the others need to finally start living. Along the way, they discover that friends may be the one thing to save them from themselves.

Attorney and author Marcia Clark co-writes and executive produces a new legal drama about Maya Travis, an L.A. district attorney who suffers a devastating defeat when prosecuting an A-list actor for double murder. With her high-profile career derailed, she flees for a quieter life in Washington. Eight years later when this same celebrity is under suspicion for another murder, Maya Travis is lured back to the DA’s office for another chance at justice. This legal thriller is executive produced/co-written by Clark, Liz Craft and Sarah Fain, and is from Mandeville TV and ABC Studios.

Eva Longoria executive produces this bold, provocative drama set at the last family-owned hotel in multicultural Miami Beach. Charismatic Santiago Mendoza owns the hotel, while his glamorous second wife, Gigi, and their adult children enjoy the spoils of success. The hotel’s loyal staff round out a contemporary, fresh take on an upstairs/downstairs story. Wealthy and beautiful guests bask in luxury, but scandals, escalating debt and explosive secrets hide beneath the picture-perfect exterior. The show is based on the Spanish series.

Brian Tanen is the writer and executive producer; Eva Longoria and Ben Spector (UnbeliEVAble), Ramon Campos and Teresa Fernandez-Valdes (Beta) are executive producers of the series. Ken Olin directed the pilot. The series is produced by ABC Studios.

Starting over isn’t easy, especially for small-town guy John Nolan who, after a life-altering incident, is pursuing his dream of being an LAPD officer. As the force’s oldest rookie, he’s met with skepticism from some higher-ups who see him as just a walking midlife crisis. If he can’t keep up with the young cops and the criminals, he’ll be risking lives including his own. But if he can use his life experience, determination and sense of humor to give him an edge, he may just become a success in this new chapter of his life.

“Whiskey Cavalier” is a high-octane, hour-long action dramedy that follows the adventures of tough but tender FBI super-agent Will Chase (codename: “Whiskey Cavalier”), played by Scott Foley. Following an emotional breakup, Chase is assigned to work with badass CIA operative Francesca “Frankie” Trowbridge (codename: “Fiery Tribune”), played by Lauren Cohan. Together, they lead an inter-agency team of flawed, funny and heroic spies who periodically save the world (and each other) while navigating the rocky roads of friendship, romance and office politics. The series is from writer/executive producer Dave Hemingson and executive producer Bill Lawrence with Warner Bros. Television.

“THE KIDS ARE ALRIGHT”

This spinoff of the hit series “The Goldbergs” will be set in 1990-something and follow the hilarious teachers of William Penn Academy – led by Tim Meadows (Principal Glascott), Bryan Callen (Coach Mellor) and AJ Michalka (Lainey Lewis) – who, despite their eccentricities and crazy personal lives, are heroes to their students.

This ensemble comedy follows a group of single parents as they lean on each other to help raise their 7-year-old kids and maintain some kind of personal lives outside of parenthood. The series begins when the group meets Will, a 30-something guy who’s been so focused on raising his daughter that he’s lost sight of who he is as a man. When the other single parents see just how far down the rabbit hole of PTA, parenting and princesses Will has gone, they band together to get him out in the dating world and make him realize that being a great parent doesn’t mean sacrificing everything about your own identity.