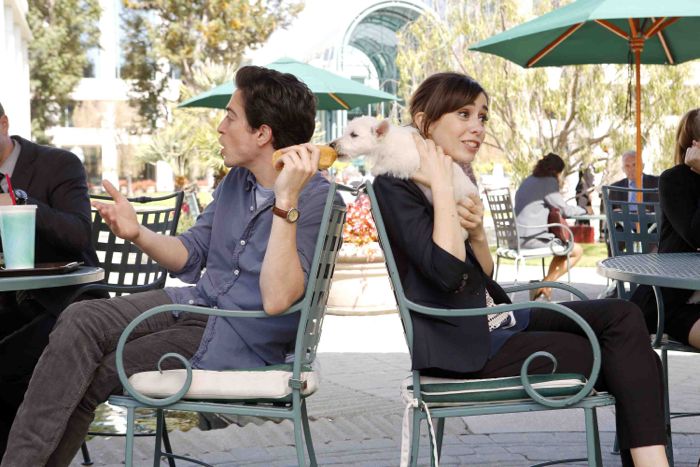 2014 is shaping up to be the fall of rom-com sitcoms. NBC joins the party with A TO Z, which I mistakenly hoped to be the long-awaited original Star Trek spin-off following librarian Mr. Atoz, but is instead a charming tale of two people destined to be together, saddled with a slightly clunky premise.

In the pilot, we meet Andrew (Ben Feldman, Mad Men), a hopeless romantic who works for an online dating website because he actually believes in helping people find love. Unfortunately, his choice of companies may be misguided because his boss, Big Bird (Christina Kirk, Along Came Polly), would prefer her employees help people hook up, not find a spouse, since the latter costs them customers. Before Andrew’s spirit is killed, though, he meets the one he’s been searching for, Zelda (Cristin Milioti, How I Met Your Mother), a lawyer who works in the next building over who doesn’t exactly believe in dating.

A TO Z is the most obvious heir-apparent to the recently ended, popular How I Met Your Mother. It features a narrator, Katey Sagal (Sons of Anarchy, Futurama), telling a finite tale (she says in the pilot that Andrew and Zelda date for a little over eight months and this series is the story of that relationship) about a guy’s search for “the one” and some kooky friends.

But there are differences. I mean, could A TO Z really make nine seasons our of an eight-month timeframe? Well, admittedly, HIMYM stretched one weekend into an entire year. More likely, though, the narration refers only to the first season of the show, and then the couple will go from there in one of several different directions. Those could be a break up and restart in a seconding dating run or an engagement. Probably the former, knowing how network television likes to stretch things out.

I’m glad to see Milioti back on the small screen so soon. She really made an impression in HIMYM, and is pretty much the perfect girl for a sitcom such as this. Feldman is equally well-cast, not being as creepily obsessive as his Mad Men character, but still exhibiting some of the same traits that seem natural to the actor. Their parts are the more modern version of a couple, the emotional guy and the trust-troubled girl, the type I find relatable, even if the fact that they are together is a tad unrealistic.

So far, the other cast members are more punchlines than complex individuals. There is little impression made by Andrew’s co-workers, Dinesh (Parvesh Cheena, Outsourced) and Lora (Hong Chau, Treme), hopefully not in place just to make the group diverse, though that is certainly a benefit of their casting. Zelda’s friend, Stephie (Lenora Crichlow, the UK’s Being Human), and Andrew’s pal, Stu (Henry Zebrowski, Your Prety Face Is Going to Hell), have an unlikely history that is mined for laughs and forced drama. But presumably they will have to become full-fledged personalities if the show goes on for long.

Yes, destiny and coincidence are linchpins of A TO Z, which is what stretches believability more than anything else. In episode one, Andrew claims to have once seen Zelda across the room at a bad concert and fell head over heels at first glance, picturing a future together including children. It only temporarily sends Zelda scrambling for the hills, but it should do more than that. It’s a nice story if true, but whether or not it is, the fact that Andrew fixates on it so immediately and strongly seems more warning sign that sweet gesture.

Perhaps that’s the cynic in me, having once been like Andrew, but finding the world a little less idealistic. Ridiculous as some twists are, they don’t totally ruin my enjoyment of a show that is sure to be entertaining and heartwarming, if nothing else, and will probably get a season pass on my TiVo.