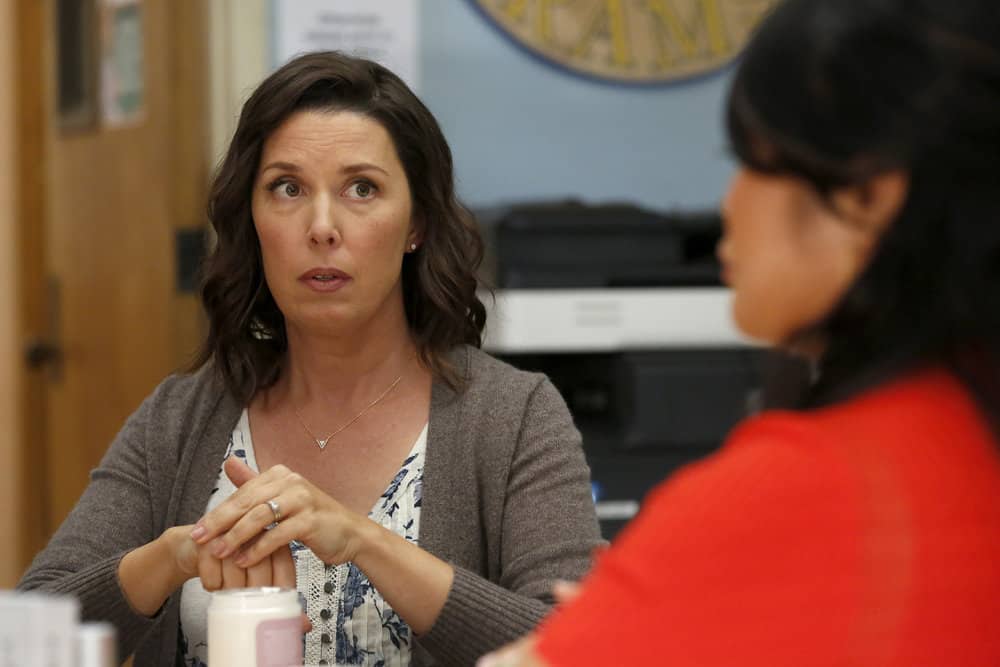 Life is full of twists and surprises, but for Jean Villepique all of those have delivered a remarkable career that has rewarded her with opportunities to work with top notch comedians, talent and performers. In her latest ventures, Jean happily jumped aboard the NBC comedy series A.P. BIO and snagged a plum role in HBO’s drama SHARP OBJECTS. In an exclusive interview, Jean shares the appeal of working on A.P. BIO and a few of the vital lessons she has learned in her career.

What was the initial appeal for you about portraying Michelle and working on NBC’s A.P. BIO?
JEAN: Mary Sohn, who plays Mary has been a friend for years, as well as our incredible creator, Mike O’Brien. So, the idea of getting to work with people I love and trust was everything to me. Mike’s comic sensibility is my favorite. He’s not afraid to be dark or absurd, or to try new things, and he always surrounds himself with talented people who are also lovely people. And Michelle is a blend of sweet and peculiar that I can relate to.

How would you describe who Michelle is?
JEAN: When I was nine, I told my mother I wanted to be Miss Mars for Halloween— a beauty pageant winner on another planet. So I got a bald-head cap and painted that and my whole face green and had pipe cleaner antennae, and really went for it. I marched around our New Jersey town with a green tutu around my neck. There’s a picture of me with normal neighbor kids who were cowgirls and ghosts and clowns. So I think Michelle is similar. I think she’s secretly freaky. I can’t wait to see who her husband Keith is. Michelle reminds me of the little sister who tags along and will do anything to be included.

What do you most admire about her?
JEAN: I love her confidence. Michelle should be embarrassed by things that she just shrugs off. And her classroom is decorated— I mean there are wild posters trying to explain sexuality and healthy eating that are truly bizarre. I love that she’s like “I GOT THIS” and does things her own way. Maybe even wrong. Yes, confidence.

What was it like working alongside the talented ensemble on A.P. BIO?
JEAN: Everyone was collaborative. There was not a lot of ego going on, so it felt like we were playing. I learned a lot from Glenn Howerton and Patton Oswalt. They are both wildly talented! So I felt like I was watching them and figuring out how to do my job better. And then Mary Sohn and Lyric Lewis were making me laugh every time, and Paula Pell, who plays Helen—I could barely keep a straight face. She is incredible. When she arrived on set, it was like: here comes the fun! It didn’t feel like work at all.

To date, what has been your favorite part about working on A.P. BIO?
JEAN: Laughing at Mary Sohn and Lyric Lewis. I have been cast in girl-gangs before— and that is not a real term (…that is probably a terrible term). I take it back…Girl cliques? Whatever you call it when there are a few of us and we are a unit. This is the first time it has been so natural. I love these ladies. I truly love them and find them so funny.

What has surprised you about working on A.P. BIO?
JEAN: I was surprised how easy it can be. When everybody works hard to prepare, the execution can be relaxed. I have worked in lots of fear-based environments, and that never brings out the best in me. But with A.P. BIO, I kept thinking— someone’s going to come tell me I need to be better — something’s going to happen where someone at the top is going to drop the hammer — is that the phrase? —but that never happened. The directors trusted the actors. We trusted the writers. The rising tide lifted all ships…

What are you most proud of about working on A.P. BIO?
JEAN: I am really proud of the company I keep. The writers, the directors and the crew are so talented and kind.

Then as an actor, what has been the one thing you have taken away from the experience of working on A.P. BIO?
JEAN: I stole a lot of cans of La Croix. My car is FULL of empties.

You will also be appearing in the new HBO series SHARP OBJECTS. What can you share about your role as Gretchen in that series?
JEAN: Gretchen is actually similar to Michelle. She also wants to be a part of things, but she is different in that she doesn’t like herself. She’s that kind of small-minded human being that wants to make fun of someone else before she gets made fun of herself. She does not judge others by the quality of their character — more like their brand of shoes. And she likes to be tan.

What have you enjoyed and appreciated about working on SHARP OBJECTS?
JEAN: I enjoyed working with so many great women! There were three generations of women friend groups — girl gangs?—I really need to find a better term. But I got to watch Patricia Clarkson and Elizabeth Perkins work. I got to work with Amy Adams, who was extremely generous. She was brilliant. And of course, Jean Marc Vallee is a real genius. His style of directing is fluid, with no starts and stops for lighting, so one scene would flow into the next. It’s a great challenge for actors, and reminded me more of theater than television or film. He would talk and direct as the scene kept going, we would go from one scene into the next, so we all had to really exist in this world, not stand and pose and hit marks.

What has surprised you most about your career so far?
JEAN: I moved from Chicago to New York and then to LA. I started over three times. And I guess it surprised me that it’s fine to pick up and change your path when you feel the need to!

At this stage of your career, what do you think you have learned from the roles and projects you have worked on?
JEAN: One the first things I ever did was work with Alec Baldwin on 30 ROCK. It was an amazing scene— he won an Emmy for it. He had so much to deliver, and in between takes he would ask me where I was from, why I started acting. Jack McBrayer helped me get that job and Tina Fey gave me a huge break by casting me. That experience taught me to help the next person instead of focusing on myself. There’s plenty to go around!

What is your proudest achievement from your career so far?
JEAN: A.P. BIO, no doubt. It’s the funniest show I’ve ever been a part of. And Mike O’Brien has known me for fifteen years. So, that means I wasn’t a complete jag, if he still wants to work with me. I’m proud that I have built strong relationships with people I admire so greatly.

Then what are the perks of where you are in your career right now?
JEAN: This January we got to go to a Golden Globes viewing party—that blew my mind. To be honest, I’m still thrilled to get free sliders! I drove an old Toyota onto the lot the first day of work and had a parking space with my name on it. For ten years, I have parked that Toyota FAR away and walked to audition after audition. Seeing my name there made me cry.

If there were one previous role you would like to revisit, which would it be and why?
JEAN: I’d love to go back to THE OFFICE! I was able to be in two episodes of that show, and I wish it went forever. I loved that world, that show, and every part of it!

Do any of your characters and the situations they find themselves in ever leave a lasting impression on you?
JEAN: I think Gretchen from SHARP OBJECTS is haunting me in that way. She is so lacking in self-awareness. She thinks she has it all down, but her attitude is so tacky that she looks like a complete fool. And her mindless following of the ringleader of her group, Katie Lacy. Gretchen. When I’m feeling myself slide into insecurity I try to watch out, so I don’t start Gretchen-ing.

Do you find any of you character’s habits manifesting in your own life? Like what?
JEAN: Oh, boy. I think when I started working on Michelle last fall, I began to incorporate little weird faces. I make little weird faces more often now. Hoping I don’t manifest habits from episode 2. Not sure if I can spoil or not, but Michelle really does her own thing. Let’s leave it at that.

Has there been any great advice you have gotten about working as an actor?
JEAN: Be early. Be over-prepared and ready to adjust in the moment. Second City training helps there. Let go of your ego. Let that go. And learn everybody’s names.

What advice would you offer to other upcoming and aspiring actors?
JEAN: Read Tina Fey’s book, read Amy Poehler’s book, read Rachel Dratch’s book! And keep busy with other things. Get hobbies and keep learning things. And volunteer. Which I don’t do enough of. But just show up at Habitat for Humanity and put up some drywall and remember you have it better than most, even if that commercial didn’t work out.

At a time when women’s voices are rising to be heard and respected around the country and world, what do you recommend your fans do to lend support in that endeavor?
JEAN: Talk less, listen more. Watch documentaries that you don’t think were made for you. Listen with compassion. Get out of your comfort zone. Listen.

Do you have any other upcoming projects that you can share that fans should keep an eye out for?
JEAN: I’m very excited that I got to work on Netflix’s BOJACK HORSEMAN this winter! The plot line is something I can relate to on a personal level. But it’s animated, so maybe keep an ear out for it?

To see what fun Jean’s character Mary gets caught up in A.P. BIO, be sure to tune in for an all new episodes on Sunday, February 25th and Thursday, March 1st at 9:30 p.m. on NBC (its regular time slot). Also keep an eye out for the premiere of SHARP OBJECTS on HBO coming later in 2018 and for Jean’s special appearance in Netflix’s BOJACK HORSEMAN. To follow more of Jean’s adventures, you can follows her on Twitter @Villepique