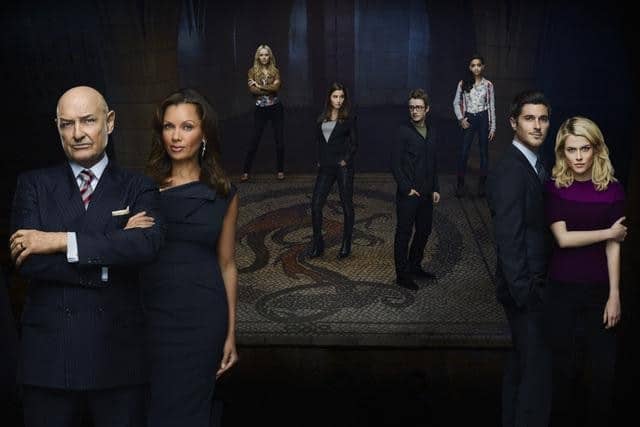 ABC’s is sticking with the magic and supernatural that worked for Once Upon a Time last year in its new drama, 666 PARK AVENUE. Set in the Upper East Side of Manhattan, the series follows the residents of the Drake, a building that sits at 999 Park Avenue (the opening reveals the 999 on the wall casting a 666 shadow). It is a mysterious, old thirteen-story tower full of secrets and a dark power. It can make your dreams come true, if you’re only willing to give up everything.

As the “Pilot” begins, young, fresh, bright-eyed couple Henry Martin (Dave Annable, Brothers & Sisters) and Jane Van Veen (Rachael Taylor, Grey’s Anatomy) arrive in New York City, and soon land the job of building manager for the Drake. They are given this opportunity by the owner, Gavin Doran (Terry O’Quinn, Lost), who sees some potential in them. And also something he wants.

The rest of the hour is a seductive dance. Gavin and his wife, Olivia (Vanessa Williams, Desperate Housewives) shower Henry and Jane with gifts and invitations to status-making events, showing them a world they could live in, if only they were a little richer. It’s assumedly all part of a game, as Gavin is determined to take their souls. Will these Midwestern folks be able to resist the allure of what Gavin is offering?

This is an age-old tale, but just because the premise is a bit dusty, doesn’t mean that the execution isn’t fresh. Indeed, by casting four recognizable and very talented faces to play this out, 666 PARK AVENUE succeeds in making something creepy and intriguing, sensual enough to draw viewers in, helped along by the tone and beautiful setting. Yes, it will cost Henry and Jane dearly if they engage with Gavin, which they surely will continue to do, but mightn’t it be worth it?

No, it’s not. As we see in the opening, Gavin is most definitely bad, and normal people wouldn’t stand a chance against him. It’s unclear whether his power stems from himself or the building, which he bought decades ago, as the dragon symbol in the basement and cult-ish history reveal that these arrangements existed well before Gavin’s time. Unless he’s really, really old.

666 PARK AVENUE balances the fine line between giving away too much too soon, and stating the series’ purpose. There is plenty for viewers to wonder about after watching the first hour, but one may also feel like they know the general rules of the place. The overall package is delivered with the right level of danger, and just a handful of glimpses, some a little lingering, at the hidden majesty of the building. Is Gavin the devil? Does he work for him? Or is the Drake a seat of evil that whoever sits in it will have to obey?

While the four mentioned above are the leads of the piece, there are quite a few other people hanging around the address, and they will likely come into play more as the show goes on. Tony (Erik Palladino, ER) is the doorman who wishes he could be building manager, but claims to not hold a grudge against Jane and Henry for getting the job. Nona (Samantha Logan) likes to swipe small valuables, and seems to know more of what’s going on that she pretends to.

And then there’s wannabe playwright Brian Leonard (Robert Buckley, One Tree Hill), who loves his demanding wife, Louise (Mercedes Masohn, The Finder), but is tempted by the pretty young blonde across the street, Alexis  Blume (Helena Mattsson, Nikita). This is clearly going to be an example story for the audience, showing exactly what will happen to Henry and Jane if they give in to Gavin and the Drake. Brian is tempted by both professional success, which remains elusive, and a possible affair, especially after Alexis becomes Louise’s assistant, teasing Brian constantly. How much Gavin has set this up isn’t revealed, but it’s likely that Alexis showing up isn’t a coincidence. Brian seems exactly the type who will take the short cut and instant pleasure, and so he will make a good cautionary tale.

There are two others already in Gavin’s snare in the “Pilot,” and both of their stories play out and end tragically before the end of the episode. This hints at a possible procedural element, with new characters each week. But enough of the installment is given over to the main characters to make me think that it will be mainly serial, following a couple of stories over the course of a season or seasons. The latter is preferable, and ripe for this kind of good vs. evil tale.

The premise is strong, and the “Pilot” engaging. Viewers should not be disappointed if they choose to visit 666 PARK AVENUE, premiering September 30th.