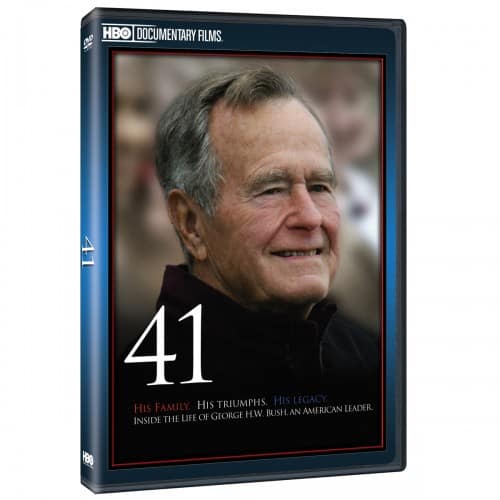 Seat42f and HBO have teamed up to give TWO lucky winners a copy of 41 on DVD. For a chance to win leave a comment below telling us why you want to add 41 to your DVD collection. Only one entry per person. Contest ends December 21st. Winners will be notified on December 22nd via email so make sure to use a valid email address when you post your comment.

41 is a rare, intimate glimpse at the life and times of the 41st president of the United States. The first documentary to tell George Herbert Walker Bush’s story in his own words, the exclusive HBO® presentation features unprecedented access to President Bush as he reflects on the highs and lows of his life from his beloved summer home in Kennebunkport, Maine and presidential library in Texas. The DVD release of 41 will arrive in stores on December 11, 2012 for the suggested retail price of $19.98.

One of the most experienced politicians ever to achieve the presidency, George H.W. Bush shares anecdotes from his childhood, family, service in World War II and political career, including his roles as U.S. envoy to China, director of the CIA and vice president of the United States in the Reagan administration, as well as his term as president. The documentary deftly weaves personal photos and black-and-white family films along with news and archival footage as President Bush reflects on his momentous life.

Written and directed by Jeffrey Roth, 41 was filmed over a 17-month period, from Sept. 2009 to Feb. 2011. The film was produced by Emmy® winner and close friend of the former president, Jerry Weintraub whose credits include: The Karate Kid movies, Diner, Ocean’s Eleven (and its sequels) as well as the upcoming HBO film, Behind the Candelabra.