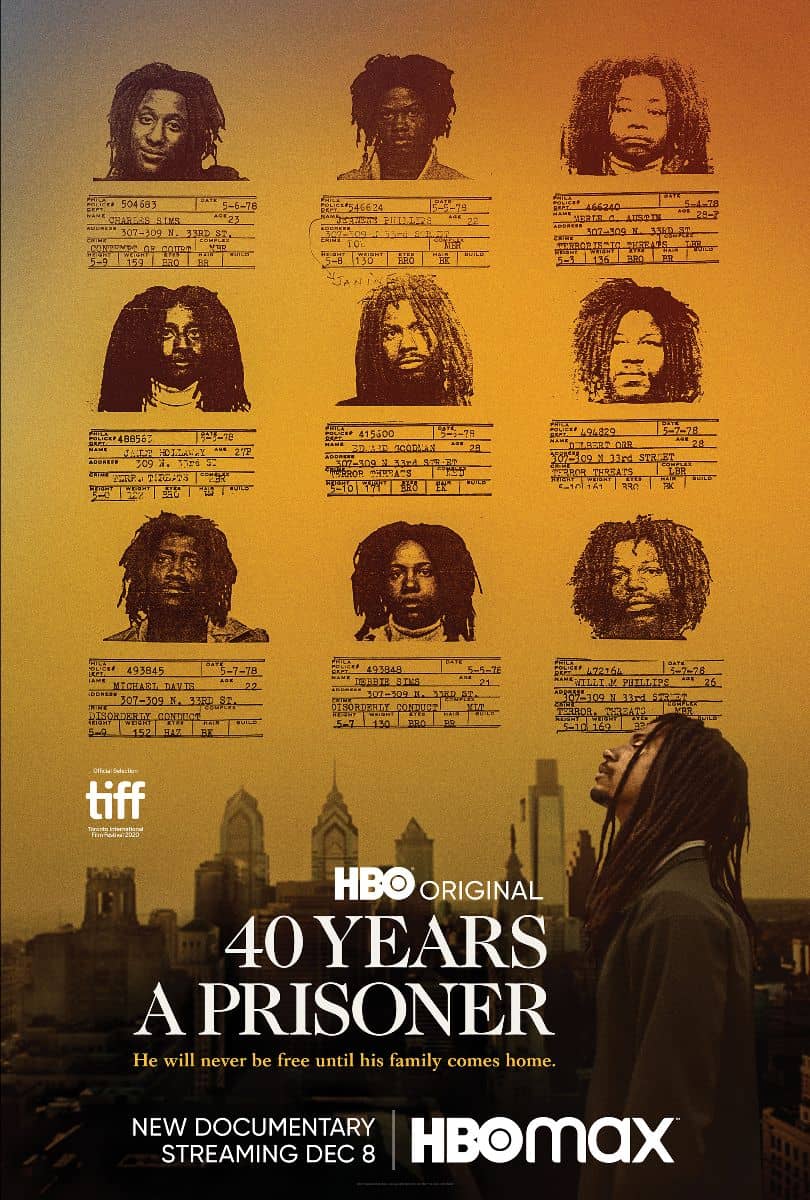 Feature documentary 40 YEARS A PRISONER, debuting TUESDAY, DECEMBER 8 (9:00-10:50 p.m. ET/PT), chronicles one of the most controversial shootouts in American history: the 1978 police raid on the radical, back-to-nature group MOVE by the Philadelphia Police Department. Using eyewitness accounts and archival footage of the not widely known confrontation, the film illuminates the story of a city grappling with racial tension and police brutality with alarming topicality and modern-day relevance. Mike Africa Jr., the son of two MOVE members imprisoned for the death of a police officer that day, has committed his life to finding out the truth about what really happened and fighting for the release of the parents that he has only ever known through prison walls.

The film will debut on HBO and be available to stream on HBO Max.

An official selection of the 2020 Toronto International Film Festival, AFI Fest and DOC NYC, 40 YEARS A PRISONER was directed, produced and shot by Tommy Oliver (“1982”) through his company, Confluential Films, with music by The Roots. It was executive produced by Common, Derek Dudley, and Shelby Stone for Freedom Road Productions, John Legend, Mike Jackson, and Ty Stiklorius for Get Lifted Film Co., and Keith Gionet and Adam Platzner for Confluential Films, and Kelly Ryan, Tariq “Black Thought” Trotter and Ahmir “Questlove” Thompson. The film was edited by Joe Kehoe and Tommy Oliver.

On the morning of August 8, 1978, the Philadelphia Police Department, at the direction of hardline Mayor Frank Rizzo, engaged in a confrontation with the MOVE organization and fired thousands of rounds of ammunition into the West Philadelphia home of the social justice group. When the smoke cleared, a police officer named James Ramp had been killed and an unarmed MOVE member named Delbert Africa had been beaten to within an inch of his life by three police officers.

The MOVE organization was an activist group based on the anti-establishment teachings of John Africa, who preached a rejection of technology and a quest for justice for all living creatures. The violent clash with the police was the result of months of escalation centered around the organization’s refusal to move the location of their headquarters from the Philadelphia neighborhood of Powelton Village. The authorities used aggressive tactics in their efforts to shut the group down, including cutting off food and water supplies, establishing a street blockade and building up police presence and use of firepower.

After the final clash with police ended, all nine MOVE members, including Debbie Africa, who was eight months pregnant, and her husband, Mike Africa Sr., were arrested and charged with murder in connection with the death of Officer James Ramp, who was killed on the scene. Immediately after the arrests, Mayor Rizzo ordered MOVE’s headquarters to be demolished, leading to questions of whether there was enough concrete physical evidence remaining to link MOVE to Ramp’s death, or whether it may have been caused by friendly fire.

While incarcerated, Debbie Africa gave birth to her son Mike Jr. who was taken from her after only one week. Mike Africa Jr. grew up knowing his parents only through prison bars, but was determined to fight for their parole and unearth the truth about a crime they insist they were not guilty of committing.

The film bristles with topicality, revealing a city overrun with social inequalities and entrenched racism where vocal, committed activism frequently clashed with hardline policing. With startling immediacy, 40 YEARS A PRISONER maps the tumultuous events that led up to the tragic shootout and its controversial aftermath and shines a light on a son’s impassioned 40-year fight for freedom.