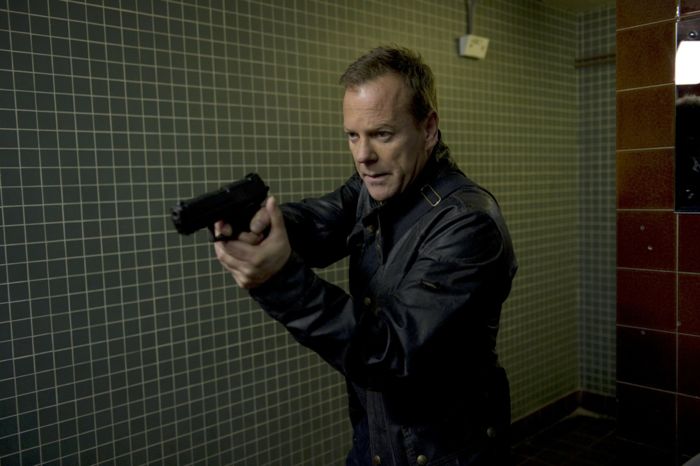 Jack is back. This week brings the revival of the popular series 24, four years after it went off the air, in a twelve-episode miniseries, 24: LIVE ANOTHER DAY. Set in London, Jack Bauer (Keifer Sutherland) emerges from hiding to stop a threat on the president’s life, as only Jack can.

WARNING: The following contains some spoilers, but does not ruin any big twists, concentrating mainly on things revealed in the first thirty minutes or in already-released press. Please read this article in real-time.

Anticipation is high for the adrenaline-fueled show, and I have to admit, watching the two-hour premiere is a bit like getting a fix of an excellent drug, or so I imagine, not being a drug user myself. That’s because 24: LIVE ANOTHER DAY releases the same endorphins and chemicals in your brain that 24 always has, scratching an itch in a spot that no other television program quite reaches.

Right from the start, it’s the same show. Keifer’s voiceover of the “events occur in real time” line and the ticking clock are there. While some installments will skip hours, this day being only half the number of episodes as previous ones but still covering a full twenty-four hour period, the premiere is from 11 AM until 1 PM, providing an unbroken starting point. And while CTU is gone, the CIA office featured and the people that staff it seem exactly like CTU, tonally and stylistically. I’m still waiting to hear if the phones share the iconic ring tone.

The opening act is intense, just as it should be. An American CIA office led by Steve Navarro (Benjamin Bratt, Private Practice) closes in on a suspect. It will come as no surprise to those who remember 24’s series finale that said wanted man is Jack, hiding among the homeless. He’s a high value target and Steve is ecstatic to get him, or as ecstatic as Steve probably gets, being a pretty mild person, emotionally speaking.

Quick to catch the attention of viewers is new player Kate Morgan (Yvonne Strahovski, Chuck). In the process of being forced out of her job because of something her husband did, Kate is the new Jack of this CIA branch, smart and wanting to make up for past wrongs. She is the only one that figures out what Jack is up to, and she butts heads with her would-be replacement, Erik Ritter (Gbenga Akinnagbe, The Wire), much to Steve’s dismay. Plus, there’s a tech guy, Jordan (Giles Matthey, True Blood), who likes Kate, but also doesn’t want to lose his job. Here is our familiar, messy dynamic.

Jack is brought into the CIA, but as soon as the president’s office is notified, Chief of Staff Mark Boudreau (Tate Donovan, Damages) orders that Jack be handed over to a special squad that is more versed in torture. Mark has a personal stake in the matter at hand, being married to Jack’s former love, Audrey Raines (Kim Raver), now released from the mental hospital. Mark is also serving under Audrey’s father, President James Heller (William Devane), who is losing his mental abilities. But what is Mark’s plan for Jack? Is Mark a good guy protecting his family or a bad guy manipulating vulnerable people?

It’s gratifying to have Heller and Audrey back on 24: LIVE ANOTHER DAY. Audrey is a loose end for Jack, someone he hurt and who suffers a lot. 24 likes to bring recurring players onto the scene over and over again until they die, so admittedly, their re-appearance could spell danger for them. But considering Jack’s history here, Heller and Audrey are ripe for exploration.

It’s also a nifty way to tie in the POTUS, whose office has almost always been a part of 24. Sure, 24: LIVE ANOTHER DAY could have staffed the place with a bunch of newbies, but there are enough fresh characters already, and the pacing doesn’t have time to introduce all new people in every aspect. On these two, we can just jump back in.

Jack is beset by many personal concerns. His return is for a mission, of course, but who he cares about hangs so heavily on these first two hours, promising pathos. Chloe (Mary Lynn Rajskub) does figure prominently in this premiere, though for the sake of preserving some mystery, I won’t reveal how she plays a role, other than to say she currently works for an Anonymous-esque hacker organization.

The politics of 24: LIVE ANOTHER DAY feel a bit more liberal than past seasons, which have skewed conservative. In the opening, the morality of killing people with drones and whether it’s OK to release classified government documents is debated. The writers may ultimately come down on the protectionist side of things, of which Jack has always played a part, but by casting people Jack respects on the other side of the debate, and I’m talking about more than just Chloe here, it is sure to make Jack and the audience at least consider their stances.

To be honest, the London setting isn’t much used yet. We meet Prime Minister Alastair Davies (Stephen Fry, QI), who will likely figure into the political proceedings, and the initial villain, Margot Al-Harazi (Michelle Fairley, Game of Thrones) seems British, but that’s it, the flavor of the city barely glimpsed. One wonders if moving the production overseas is important or a gimmick, as the answer is not made clear in the premiere.

A lot happens in these two hours, but I’ve said more than enough. Suffice it to say, 24: LIVE ANOTHER DAY continues the proud tradition of a great series. If you liked 24, you’ll like this, and if you’ve never seen 24, it seems accessible enough for newbies to jump in at this point. 24: LIVE ANOTHER DAY premieres Monday at 8 p.m. ET.