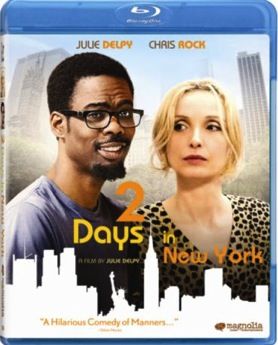 Seat42f and Magnolia Home Entertainment have teamed up to give TWO lucky winners a DVD prize pack featuring 2 DAYS IN NEW YORK, THE BURNING PLAIN, THE ANSWER MAN and THE GREAT BUCK HOWARD on DVD. For a chance to win leave a comment below telling us why you want to add this prize pack to your DVD collection. Contest ends November 23rd. Winners will be notified on November 26th via email so make sure to use a valid email address when you post your comment.

2 DAYS IN NEW YORK : Hip talk-radio host and journalist Mingus (Chris Rock) and his French photographer girlfriend, Marion (Julie Delpy), live cozily in a New York apartment with their cat and two young children from previous relationships. But when Marion’s jolly father, her oversexed sister, and her sister’s outrageous boyfriend unceremoniously descend upon them for an overseas visit, it initiates two unforgettable days of family mayhem.

THE BURNING PLAIN : a romantic mystery about a woman on the edge who takes an emotional journey back to the defining moment of her life. Oscar-winner Charlize Theron plays Sylvia, a beautiful restaurant manager whose cool, professional demeanor masks the sexually charged storm within. When a stranger from Mexico confronts her with her mysterious past, Sylvia is launched into a journey through space and time that inextricably connects her to these disparate characters, all of whom are grappling with their own romantic destinies.

THE ANSWER MAN : From first-time writer-director John Hindman, comes THE ANSWER MAN, a romantic comedy starring Jeff Daniels (The Squid and the Whale) and Lauren Graham (Gilmore Girls) about love and the search for meaning. Arlen Faber (Daniels) is the reclusive and misanthropic author of “Me and God,” a book that has redefined spirituality for an entire generation and has been translated into over 100 languages. On the eve of the 20th anniversary of his still wildly popular book, Arlen is still sought after as the man who has all the answers. Arlen find his world turned upside down when his life collides with Elizabeth (Graham), a single mother who might just be able to provide the salvation he needs. In addition, Arlen forms an unlikely friendship with Kris (“Thumbsucker’s” Lou Taylor Pucci), a young man fresh out of rehab who is searching for meaning. Both Elizabeth and Kris are hopeful that Arlen has the answers, but the truth is, he hasn’t got a clue. Kat Dennings (Nick and Norah’s Infinite Playlist) and Olivia Thirlby (Juno) also star in this charmingly witty romantic drama.

THE GREAT BUCK HOWARD : Once upon a time, Buck Howard (John Malkovich) spent his days in the limelight. His mind-boggling feats as a mentalist extraordinaire – not to be confused with those of a mere magician – earned him a marquee act in Vegas and 61 appearances on Johnny Carson’s Tonight Show. In his own humble opinion, his talents go far beyond simple sleight of hand – he can read minds and hypnotize not just a single soul but an entire room of people! But nowadays, it’s clear to everyone but Buck that his act has lost its luster; he performs in faded community centers and hasn’t sold out a theater in years.