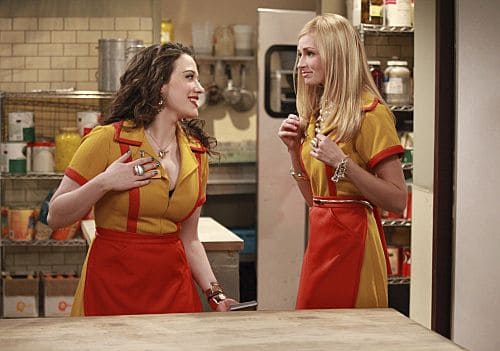 2 BROKE GIRLS Season 1 Episode 1 Pilot Photos : “Pilot” – Experienced waitress Max Black meets her new co-worker, former rich-girl Caroline Channing, and puts her skills to the test at an old but re-emerging Brooklyn diner. Despite her initial distaste for Caroline, Max eventually softens and the two team up for a new business venture, on the series premiere of 2 BROKE GIRLS, Monday, Sept. 19 (9:30-10:00 PM, ET/PT) on the CBS Television Network.

2 BROKE GIRLS is a comedy about two young women waitressing at a greasy spoon diner who strike up an unlikely friendship in the hopes of launching a successful business – if only they can raise the cash.&nbsp; Sassy, streetwise Max Black works two jobs just to get by, one of which is waiting tables during the night shift at the retro-hip Williamsburg Diner.&nbsp; Sophisticated Caroline Channing is an uptown trust fund princess who’s having a run of bad luck that forces her to reluctantly give waitressing a shot.&nbsp; At first, Max sees Caroline as yet another in a long line of inept servers she must cover for, but she’s surprised to find that Caroline has as much substance as she does style.&nbsp; When Caroline discovers Max’s knack for baking amazing cupcakes, she sees a lucrative future for them, but they first need to raise the start-up money.&nbsp; While they save their tips, they’ll stay at the restaurant, working with Oleg, an overly flirtatious Russian cook; Earl, a 75-year-old kool-kat cashier; and Han Lee, the new, eager-to-please owner of the diner.&nbsp; Working together, these two broke girls living in one expensive city might just find the perfect recipe for their big break.