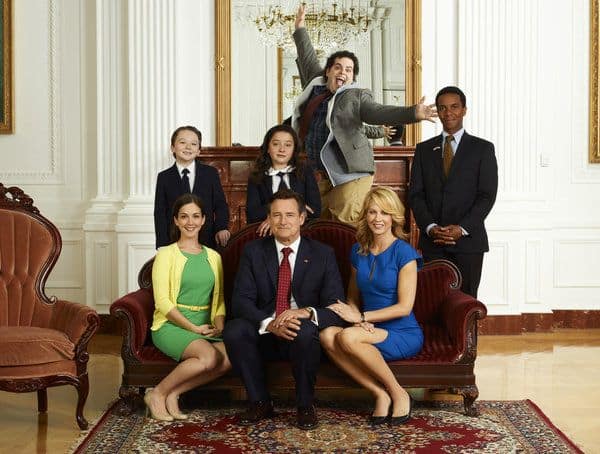 NBC’s latest sitcom is 1600 PENN. It’s a family sitcom, following a father, Dale Gilchrest (Bill Pullman, Torchwood: Miracle Day, Independence Day), his four children, and his new trophy wife, Emily (Jenna Elfman, Damages, Dharma & Greg). Their relationships are about what you’d expect in a clan of this type. The kids, especially the eldest son, Skip (Josh Gad, Book of Mormon), want their father’s approval, and Emily would like to win her stepchildren’s trust.

The twist is, Dale is the President of the United States, and the family lives in the White House.

Some might expect that this may change the circumstances a bit. And it does, but only to a small extent. Instead of relatives or friends visiting the family, it’s foreign dignitaries. Instead of wondering what their neighbors will think about personal developments, the entire population of the U.S. is watching the Gilchrests. Instead of breaking grandmother’s dish in a predictable accident, it’s priceless China that people lost their lives transporting that is destroyed.

But basically, 1600 PENN is a family comedy like many others. The relationships are relatable and typical, and the characters are usually more concerned with how they feel about each other, than how the world at large views them. Sure, oldest daughter Becca (Martha MacIsaac, Superbad, Greek) isn’t happy when the press speculate on her unplanned pregnancy. But she is more concerned with her father and younger siblings’ reactions.

One would think that this is a recipe for success, taking a household that typically sits out of reach of the average person, and opening it up in a way that we can find accessible. But that’s not quite how it plays out.

The problem is, the humor of 1600 PENN is far goofier than it should be. Whereas, a series like Modern Family may look at how people actually act, 1600 PENN makes every disaster and stunt over-sized, until it becomes completely unrealistic. In the “Pilot,” Skip sets a frat house on fire, and gets away with it with no discernible consequences. Then he solves global issues by drinking and joking. Emily and Becca bicker in front of the press. In episode three, Dale uses a meeting with the joint chiefs of staff to discuss parenting. It’s just too much to accept.

I’m not saying the characters aren’t interesting. Emily is earnest, for sure, and everyone cares about each other. Younger daughter, Marigold (Amara Miller, The Descendants), is a budding lesbian, and youngest son, Xander (Benjamin Stockham, Sons of Tucson), is worried about meteors hitting the earth, so they have stories to tell, too. There is a love triangle set up between Becca, her baby daddy, D.B. (Robbie Amell, Revenge), and Dale’s assistant / press secretary, Marshall (Andre Holland, Friends with Benefits). Even Skip, screw up as he is, has his positives, and loves his family.

But the situations just go too far. Should it be scaled back, there could be something here. Instead, this one seems destined for a quick cancellation, without even being given time to build up an audience, or address the problems. It’s too bad, as with a cast like this, and an intriguing premise, it could have been good.

One final complaint, I am just not sure what Marshall’s job is. He is the only main character who isn’t part of the family, and is constantly seen giving briefings and helping out Dale. The other White House workers hover around, but none are shown to have any importance. Instead, Marshall seems to be the representation for the entire staff, which may save on budget and logistics, but makes the world in which the show is set seem even less fleshed out than it already does.

While 1600 PENN may be a curiosity that some may want to check out, you won’t miss much by skipping it, and likely won’t regret that decision.